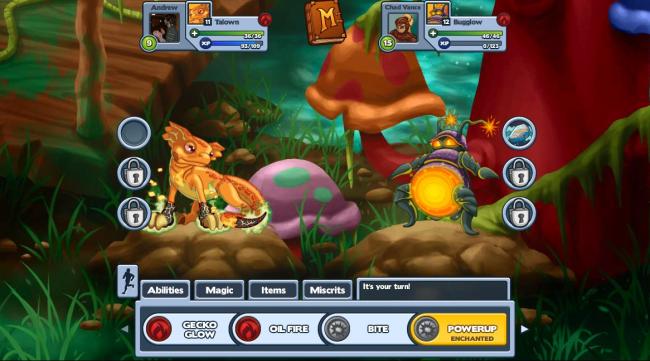 There have many games that have tried to emulate Nintendo’s success with the Pokemon series, but few have done it as well as Miscrits of Volcano Island. It’s the rare social game that actually feels epic. The world is huge and varied, and exploration is very satisfying. The game doesn’t stray too far from the incredibly successful formula it’s emulating, but at the same time it manages to create a feel all of its own.

In Miscrits of Volcano Island you are the chosen one, of sorts. There’s a prophecy that predicted that one day you’d come to the island and set things right. And the way to do that, of course, is by collecting and battling lots and lots of creatures called miscrits. The story isn’t particularly original, but it’s fleshed out quite a bit more than in most games on Facebook. There are plenty of non-player characters that you can talk with, including a bustling port town filled with interesting people.

But really the story is just here to provide a reason to explore the island. Like Pokemon, Miscrits is all about collecting creatures and creating the perfect team. You’ll begin with one starter miscrit and from there you’ll need to assemble a team of fighters. Battles aren’t random as in most similar games, instead you can search for miscrits to fight and catch by investigating the world around you. You can search trees, bushes, and caves, and most of the time this will bring you to a battle sequence with another miscrit.

Combat works much as it does in similar games. It’s turn-based, and you’ll have a number of abilities and attacks to choose from, though your options will increase as your miscrit levels up. A number of factors determine your success in battle, including the elemental affinities of each miscrit (fire is strong against nature, for instance, but weak against water) as well as their experience level. And, of course, you can capture new creatures by weakening them and using a magical book to collect them. Thankfully, unlike pokeballs, your use of the book isn’t limited at all.

Really, if you’ve ever played a Pokemon game Miscrits of Volcano Island will feel mostly familiar. Miscrits evolve at certain experience levels, mini-boss characters are littered throughout the world, and there are shops where you can buy items and heal your miscrits. There’s also an arena where you can test your team against other real players also in the game. This works the same as in the single-player campaign, except you only have 30 seconds per turn to help speed the action along. 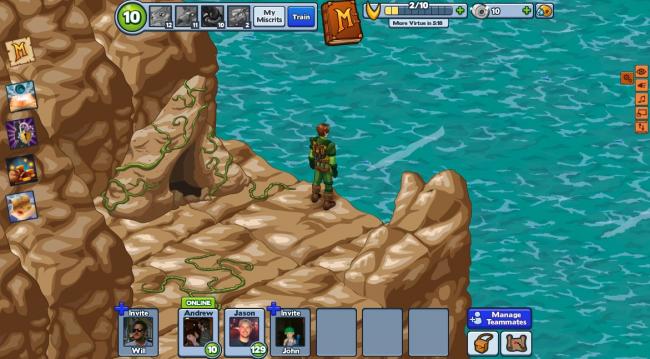 There are a few changes based on the platform, however. Many of the items and even some special miscrits can be purchased with premium currency, which you do earn slowly throughout the game but can also be purchased with real money. In place of energy is a feature called virtue, which doesn’t limit how much you can play directly, but instead is required to heal up your virtual critters. So you can keep playing indefinitely so long as your miscrits don’t get beat up, and since their health replenishes as they gain levels there are plenty of ways to extend your play sessions without resorting to spending real money. It should also be noted that the game’s terrific presentation, while still full of cute little animals, is clearly geared for a somewhat older audience. It’s still suitable for kids, but it’s less embarrassing for adults, too.

The most impressive thing about Miscrits of Volcano Island is just how expansive it is. It just feels like there’s so much to do and see. While the game may not be particularly original, it manages to do what a number of games before it have failed: create a fun, satisfying, and addictive Pokemon-style game on Facebook.