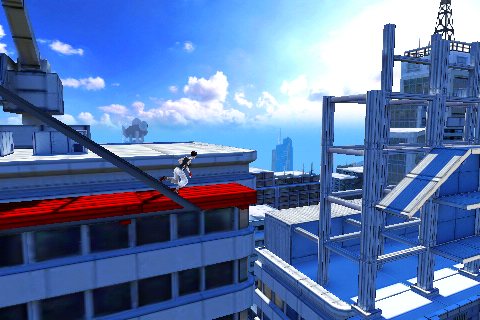 Parkour, the art of urban athletics, is all about fast movements and quick thinking. That’s why we can’t help but chuckle when we think of the slow and plodding wait iPhone gamers have suffered in anticipation of EA’s parkour platformer Mirror’s Edge. Originally slated for a January release, Mirror’s Edge has finally arrived in the App Store for iPhone gamers – and it was well worth the wait.

Sharing its story with EA’s earlier home console release of the same name, Mirror’s Edge is the story of a “runner” in a dystopian future. It’s a future where information is controlled, and runners are couriers who operate outside the law. You play as Faith, a runner with a penchant for rooftop acrobatics and high speeds.

While certainly different from games like Canabalt and Monster Dash in many respects, it’s hard to avoid drawing comparisons. Like those games, Mirror’s Edge is about high-speed rooftop running. Also, players don’t control Faith’s movement so much as her ability to avoid pitfalls and obstacles. Moving on from there, however, Mirror’s Edge quickly sets itself apart with some unique controls and craft level design.

Divided into 14 levels, players will use a series of swiping techniques to safely and quickly guide Faith through each level. Swiping left or right, for example, will have her change directions. Swiping down with have her change into a slide, while swiping up will have her jump. Things get a little more complicated once you’ve mastered the basics, with swipes down quickly being followed by swipes up to keep running, and swipes to jump turning into well-timed repeated swipes to bounce back and forth between two walls. It sounds complicated, but in practice it’s all very intuitive.

All of these mechanics would mean very little without some decent level design, and thankfully this is where Mirror’s Edge absolutely shines. Things move at a fast pace, but that doesn’t mean the levels don’t have a good deal of variety to them. In the span of 15 seconds, players can find themselves sliding down sloped glass ceilings, dodging helicopter fire, jumping from suspended platforms, wall-running across billboards, and balancing along construction beams – all while dropkicking and disarming bad guys along the way. Needless to say, Mirror’s Edge never gives itself the chance to get dull.

Visually, Mirror’s Edge is a landmark in iPhone gaming. There have been some technically impressive games on the iPhone lately, and Mirror’s Edge easily ranks amongst the best. 3D visuals set the stage for 2D gameplay, offering an outstanding level of polish in everything from the buildings to the automatic camera adjustments. Designed with the retina display in mind, things look even better on the iPhone 4. 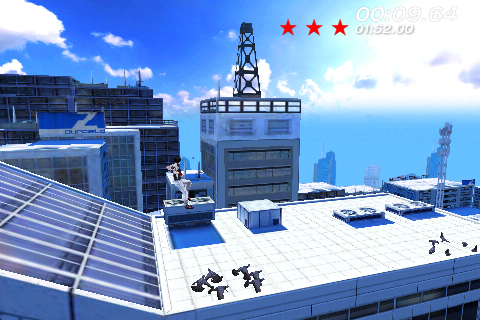 Veterans of the web-based Mirror’s Edge 2D may notice some similar gameplay elements here, yet the two games couldn’t feel more different. Both may be platform adventures about parkour using the same basic jumping and sliding controls, yet there’s a certain speed and simplicity in the iPhone game that sets the two apart. If you’re a fan of one you’ll no doubt like the other, but if you’re thinking of giving Mirror’s Edge a pass on the iPhone because you’ve already played the web-based 2D for free, you’re going to want to think again.

The 14 included levels are fun, but can be wrapped up after only a handful of sessions. The 14 levels may be all there is to the game, but EA has done a commendable job in giving you reasons to revisit them. Playing the speed run mode lets you try to earn a certain rating for completing levels quickly, while earning badges for accomplishing certain tasks will unlock wallpapers that you can save to Photo Library. Considering how the game lacks any real additional content, the replay incentives here have a surprising strong appeal.

While we would have liked to have seen some additional modes (the iPad version offers head-to-head multiplayer, for example) and some maps designed specifically for speed runs, it’s hard to find any fault with the package that Mirror’s Edge brings to the table. If you enjoy the fast-paced gameplay of Canabalt but want the intricate level design of a platformer, consider Mirror’s Edge money well spent.