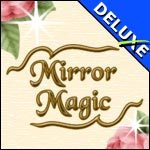 You may remember those puzzles in kids magazines that challenge readers to study two nearly identical pictures and find subtle differences between them.

This is the basic premise behind Mirror Magic Deluxe, a new casual game download that borrows heavily from those old brainteasers, but adds a story mode, colorful graphics and new twists to the game-play.

The game works as follows: you’re presented with two high-quality color photographs of a scene, such as a waterway in Venice. Shown side-by-side, the two photos look the same until you notice there’s an extra gondola on one of the photos. And the photo to the left has birds in the sky but none on the right.

Players then use the mouse to click on the part of the photo that is different; if correct, a yellow circle highlights the area. In total, five differences must be found between the two pictures within a limited amount of time. If stuck, gamers can click on the Hint tab to shine a light on a section of the photo worth looking closer at.

As the game progresses, new game-play elements are introduced to make the task a bit more difficult. For example, you may be asked to look at three nearly identical images instead of two. Or fog may appear on the photos and you must wave your mouse back and forth to blow it away so it won’t obstruct your view. Later on in the game, spiders crawl across the photos, a carnival effect slowly warps the photos or your mouse will also start playing tricks on you.

While silly, the story mode is a nice addition to the game. It involves a beautiful but vain woman, Grendoline, who was mysteriously transformed into an old woman. She believes her beauty can only be restored by magically trapping nearby villagers in mirrors. You play as the young Iris, who ventures out to find and rescue her kidnapped parents, and also helps to free other trapped villagers along the way. Without giving much away, the final showdown with Grendoline takes place in her castle, but ends in an anti-climactic way.

The disappointing conclusion to the story isn’t that big of a deal, but there are some annoying shortcomings nonetheless. Sometimes, when you correctly identify a difference between images, you’re still penalized with a large red “X” as if you clicked the wrong area of the screen. The right spot may be a fraction of an inch away but instead of giving you the benefit of the doubt, the game lowers your accuracy score. Also, the game inexplicably crashed twice before the end of the adventure.

What makes up for these minor niggles is a surprise bonus for completing the game: the moment you finish the story mode, Mirror Magic Deluxe goes online and downloads a whole new set of images so you can play the entire tale all over again without seeing the same images.

Another feature that helps keep it interesting is that when you play the game again, even the same images you previously saw will have new differences between them. Obviously, this takes a fair amount of work on the part of the developer, but it’s clearly worthwhile; this clever addition will absolutely keep you on your toes.

Mirror Magic Deluxe is one of those games that offers something unique to players — and the developers have succeeded — but as a result of being different, a game like Mirror Magic Deluxe may not have the same kind of mainstream appeal as say, a Mahjong remake, Bejeweled clone or the latest word game craze.

That said, kudos to Zylom for creating an engrossing and fresh game that is fun, challenging and highly replayable. Whether or not you played these games as a kid, you should find plenty of hours of enjoyment from playing Mirror Magic Deluxe – and you’ll develop a keener eye in the process.