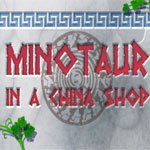 We’ve all heard the expression “bull in a china shop,” but did you ever think you’d get to play as one? Minotaur China Shop puts you in the hooves of a minotaur who loves selling china. The problem, of course, is that he can’t help but break half his merchandise. Can you help the minotaur turn a profit in five days despite his clumsier tendencies?

No china shop owned by a minotaur would be complete without insurance, so you’ll have to decide if you’d rather earn money selling items to customers or destroying products for a big insurance payout. Therein lies both the yin and yang on Minotaur China Shop. Will your play style appeal to the business side of this great hulking beast? Or would you rather give in to his primal side and enter a wildly destructive minotaur rage?

Should you choose to go the business route, you’ll find that controlling the minotaur is about as easy as… well, a bull in a china shop. The minotaur walks with a wobbly, swinging gait that makes the shelves full of fine china the easy target of an accidental left turn. You’ll control his movement with the arrow keys, but pushing up doesn’t make him go up – it makes him go forward. It’s awkward, but intentionally awkward controls were a must to make this game work. After all, if it was easy to get items for customers, than why would anyone choose to go on an insurance-milking rage?

Walking around to get items for customers gets more difficult as the days go on and your inventory grows to crowd the store. As you find yourself knocking over full racks of china purely by accident, it just becomes easier to lose control and go into a total rage, destroying the shop in the process.

Once you begin your path of destruction the game quickly recognizes that a switch has flipped in the bull’s head. At this point, destroyed merchandise goes from costing you money to earning it. The more you destroy the more you make, and the faster you destroy the higher your bonus. Attempting to destroy everything in the store can be just as much fun as the delicate customer service experience is when you’re trying to keep everything intact.

Between days you’ll be able to purchase a number of new moves and improvements. Increasing your strength, adding to the store’s advertising budget, purchasing fantastic new moves of total destruction – all of this can be done with the funds you’ve earned to date. With only 5 days to earn money it’s unlikely you’ll be able to purchase all of the upgrades in a single game, leaving a great incentive for replay. After all – who doesn’t love the idea of helping a minotaur reform his destructive ways?

Balancing two gameplay elements and putting the choice between them in the players hands makes Minotaur China Shop a unique experience in the gaming world. The intentionally frustrating controls, while perfect for the experience at hand, aren’t going to be for everyone. If you can adapt to them, though, you’re going to find Minotaur China Shop to be a fun ride for the 15 minutes or so that it lasts.