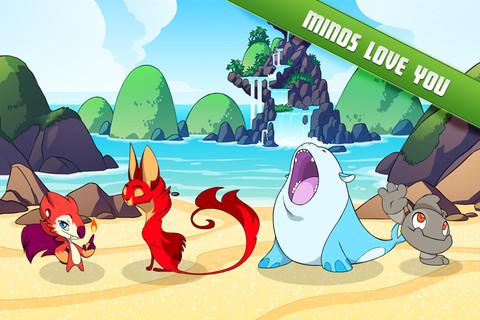 MinoMonsters for mobile is Pokemon for beginners

Just like its Facebook counterpart, the mobile version of MinoMonsters is simply a Pokemon game that isn’t developed by Nintendo. Actually, simple is a good way to describe the game, as much of the complexity that Nintendo’s series is known for has been stripped away. The story, game world, and even much of the strategy is gone. What you’re left with is an admittedly very pretty game, but one that’s ultimately unsatisfying.

At the outset of MinoMonsters your boat crashes on an island and … well, that’s about as much in the way of narrative as you’re going to get. There’s no real story here. You simply want to catch monsters. Just because. To do that you’ll need to navigate a series of islands, completing a number of basic goals, and getting into lots of monster battles. You’ll start out with just one little monster, but you can add more to your stable by weakening them in a fight and feeding them some candy. It works in the same way as a pokeball.

The goals are a lot like what you’d find in a social game on Facebook. You’ll have to defeat a certain number of monsters, for instance, or catch a particular creature to add to your team. In fact, there’s a lot here that’s common to Facebook games. In combat enemies will explode with health, energy (used for special attacks), and experience after being attacked. When one of your monsters is defeated you’ll have to wait a lengthy period for them to recover, and you’ll need premium currency to buy, well, pretty much everything in the game.

This could be forgiven if there was a bit more depth to the game, but it’s really all far too simple. Each island consists of little more than a series of small spots that you can jump between, with no real points of interest to explore. You simply wander around. Enemies will be jumping around as well and if you happen to land on the same spot you’ll enter in battle. Combat is turn-based, and you have a basic attack as well as few special skills and that’s about it. Each monster has an elemental affinity, such as air or fire, creating a very basic rock-paper-scissors-style battle system. 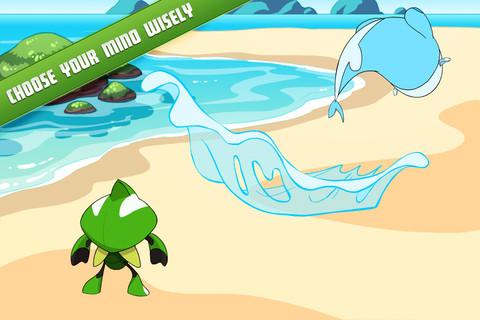 Where the game doesn’t simplify things, though, is with its presentation. The hand-drawn, cartoon-style art is simply wonderful, and unlike most Pokemon-style games (including Pokemon itself) the battles are fully animated. When the battles start MinoMonsters has the look of a high quality animated series.

Actual Pokemon games are obviously the best option if you’re in the mood for some monster collecting action, but even on the iPhone there are better, more engaging options than MinoMonsters. In particular, Monster Galaxy offers a much deeper, more challenging experience. MinoMonsters is good as an introductory game, but for anyone that’s ever played a Pokemon game before it will feel very lacking.