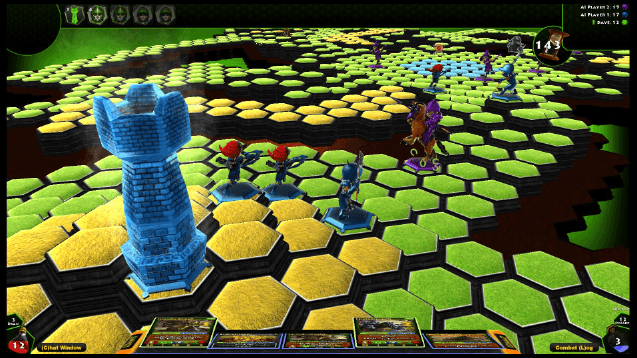 The perfect opportunity to add “mastery of minions” to your résumé

If there’s a sweet spot for the segment of geekdom that enjoys playing games of the non-video variety, it would have to be where tabletop miniature battles meet collectible card games. BitFlip Games has come up with an ambitious way to combine the two in a virtual sense with Minion Master, a strategy game where summoned fantasy and horror beings duke it out in solo or multiplayer battles on your PC.

The developers at BitFlip actually created Minion Master as a physical game first, piecing it together from parts of other games and writing up the cards by hand. The hex-based maps may give you a clue as to one of the places they got their inspiration. Hint: It rhymes with “Beer-O-Grape.”

Those hexes host your tower, which serves as your physical representation on the battlefield. Every other player has one too, but they can’t be attacked directly. Instead, your deck of cards contains a number of spells that summon minions, along with other spells that modify them in various ways. Every destroyed minion does damage to its controller, and once your health hits zero (and your tower has crumbled to nothingness), you’re out of the game.

In each turn, you get five cards drawn from your deck to your hand. Cards require mana to play, supplied by discarding other cards in your hand. Each card has a separate play and discard value, and since the former is almost always greater than the latter, it forces some tough decisions in every round. There’s a time limit too, which keeps things moving.

As the tutorial explains, the game simulates the effects of the cards that are played in turns, but the results play out simultaneously. This takes a little getting used to, but it speeds up the gameplay quite a bit and is a clear benefit of making this a video game instead of a physical one. Summoned minions move and attack based on unit-specific pre-set logic, though you can spend extra mana to override those instructions and issue some of your own. It’s an intriguing twist, but one that takes some time and experimentation to utilize properly.

The gameplay is also affected by the terrain on each hex, which can range from grass to asphalt to obsidian to lava. All of it is color coded to make it easier to remember, but in the heat of the action, something more visually distinctive would be nice. You do have the ability to zoom or tilt the board in any direction, a helpful inclusion for the times minions get bunched together in melee combat. 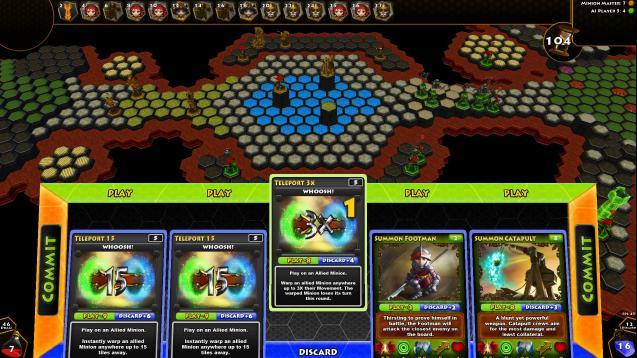 Minion Master has both Fantasy and Horror themes in its initial set of cards, with some spells usable only by that faction and others that are universal. There’s plenty of room for trying out combos, and along with decks and boosters, BitFlip has the entire card set on sale for a reasonable price. That being said, there are only 17 different minions in the release assortment, so be prepared to see the same faces on the battlefield quite a bit.

That’s especially noticeable when the games are more than two-sided. It’s great that the game can be played in true multiplayer fashion, and it seems to play just fine whether you have two players or six. To really take advantage of that though, more cards are definitely on the wish list. The matchmaking lobby allows you to set the parameters of each game to your liking, with a handy chat window right beside it to aid in finding other combatants. AI opponents can also be thrown into the mix, and there are a number of solo scenarios of varying difficulty. The included map editor is fairly easy to use, and you have to figure all kinds of creative boards will pop up if the game develops enough of a community.

With cards and virtual miniatures both in this one, there’s 2D and 3D art to enjoy. Both are fine if not especially memorable, and the 3D models look a little nicer if you can run the game on its top graphics settings. It would have been okay if the game had only sound effects, but BitFlip went the extra mile to have a musical score composed as well. 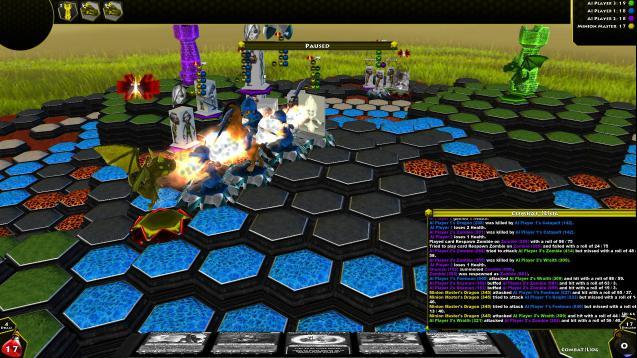 My editor pitched this review to me as “Heroscape meets Magic.” That’s an incredibly high bar to clear, but Minion Master is on the right track. Like many ambitious games, it mostly needs more – more players, more cards, etc. It’s up for voting on Steam Greenlight, so if you find yourself intrigued by the CCG/miniatures mash-up concept, you may want to head there to give it a “Yes.”