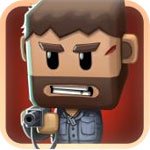 While its roots can be traced back to early 80’s arcade classics like Crystal Castles and Robotron 2084, the twin stick shooter genre has been experiencing something of a renaissance on modern consoles. Long forgotten by gamers too young to remember classics like Smash TV, the genre had all but been forgotten until games like Geometry Wars and Everyday Shooter arrived over the past few years. And while the resurgence in popularity meant the twin stick shooter would come to every possible platform, few would have every considered the iPhone.. well… possible. After all, to have a twin stick shooter you’d need to have two sticks – wouldn’t you?

Much to the chagrin of arcade purists, Mingore replaces the analog sticks of yore with touch sensitive circles that allow you to control the action much as you would with a traditional controller. Your left circle controls your characters movement just as the left stick would in any conventional twin stick shooter, while the right controls the direction of your fire. The idea behind a twin stick shooter is fairly simple – a characters movement doesn’t always have to correspond with the direction a character the character shoots. Each stick, or in this case touch-sensitive circle, controls the direction of movement and combat respectively.

Like most arcade style games, Minigore is less about specific objectives and more about surviving for as long as you can and racking up the highest score you can. You fill the shoes of John Gore, a hunter trapped in the word of Hardland. Hardland is infested with creatures called furries that are far more eager to hunt you than you are them. The furries are adorable, cartoony, dark-furred critters that come in a variety of sizes and usually travel in large packs. At night you’ll need to fight flaming furries who are faster and far more persistant than their daytime counterparts, so you’ll need to stay on your toes.

As you make your way through the non-stop furry killfest, you’ll occasionally come across shotguns or grenade launchers that you can use for a limited time. As of the most recent update as of this writing (v3.5) you can now dual-wield weapons, meaning if you’re fortunate enough to come across two shotguns or a shotgun and a grenade launcher, you’ll be packing double the heat to tackle the endless furry army. Or maybe you’d rather just gobble up enough treats to turn into an unstoppable, invincible monster. How you choose to best survive is entirely in your hands.

may be the central theme of the game, but that doesn’t mean it isn’t without a sense of fun and silliness. The art style alone is the cartoony, over-the-top style that tickles a child-like spot in all our hearts. Add to that silly dialogue and well-cast voice acting and you’ve got a game that’s sure to make you crack a smile.

Admittedly the games one major flaw is its repetitiveness, but that’s not to say Minigore isn’t without incentives. While the game offers a single small map and only a handful of weapons and enemies, the team at Moutain Sheep Games have proven themselves the master of carrot-on-a-stick addictiveness. In addition to offering a wealth of achievements and leaderboards through the OpenFeint social gaming platform, the game includes a number of unlockable characters that can only be reached by completing a certain number of kills. John’s poor old uncle Jerry can be unlocked after only 100 kills, while the great master Sensei Evan requires a whopping million. Don’t worry though – there are a lot of unlockables in between those two extremes.

In fact, these unlockables are a big part of what makes Minigore such a great example of progressive indie development. Remember Enviro-Bear from Enviro-Bear 2010? He’s an unlockable. About Lizzy the Lizard from Sway? Minigore’s got him too. Cross-promotional content is a fantastic idea that can help players discover other wonderful independent games, and the team at Mountain Sheep have jumped into the spirit of community feet first. (In a related note, you can see Minigore’s John Gore in a guest spot in the most recent update to Sway.)

Minigore has developed quite the glowing reputation over the past few months, and it’s not hard to see why. The charming presentation and terrific unlockables aside, Minigore has done the impossible: put a twin-stick shooter in our pockets. And while the game certainly owes a debt to Chillingo’s previous effort iDracula, there’s no arguing that Minigore is the first successful twin-stick for the iPhone that has something for everybody. Now if only they could round it out with a bigger assortment of weapons and enemies, and maybe a variety of maps to select from…