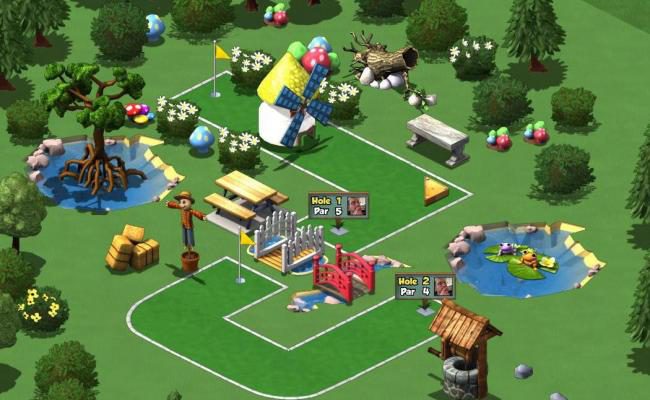 Mini Putt Park might not be a hole in one, but it’s certainly on par for the course.

In recent years, the social gaming scene has been crowded with tired Farmville clones that usually only let your friends gawk at your farm or village and fiddle with various distractions; Majesco wants you to challenge those same friends, let them have a good time, and give them a reason to visit your social spaces that doesn’t merely involves snagging some extra energy and coins for your own creations. If that sounds like fun, I’m happy to report that it is, but you should also steel yourself when it tosses you a few balls that don’t stay in the court.

The idea is simple. You can design your own putt-putt courses for your friends to play, and you can play through those of your friends or those of random players throughout the world. For unlockables for your own course, you can play through a campaign that awards everything from Asian-themed fans that open to block the passage of balls to tunnels that make aiming a little trickier, all geared toward making each course more interesting and challenging. The courses themselves could benefit from small height variations, but there’s generally enough here to make a course that’s guaranteed to stand out. 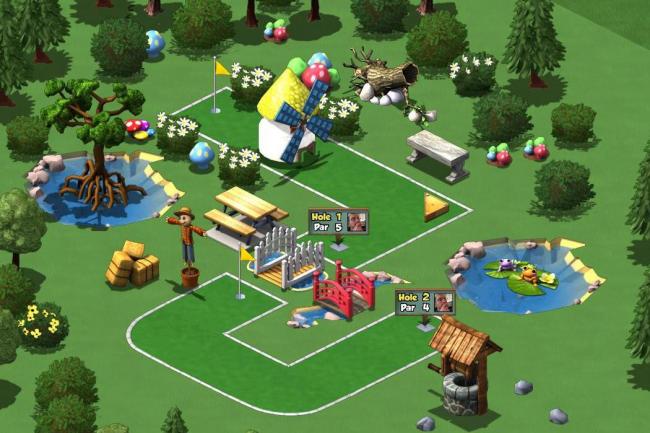 The beauty of the whole affair is that it largely works. Balls largely follow sensible trajectories when they bounce off walls and the like, the process of putting follows the familiar practice of lengthening a line away from the club with your mouse for more strength (although there’s no mini-game for close putts around the hole), and Majesco even rules out impossible courses by forcing you to beat your own creations in 10 putts before they’re allowed to go live. The only dull aspect of the gameplay proper is the way it robs you of the satisfaction of watching the ball plop into the hole since, by that time, the congratulation screen has already burst onto the screen.

Unfortunately, Mini Putt Park is also one of those games that blocks off your progress if you don’t have at least a couple of friends with you not long after the tutorial. The implementation is cute enough–they call it a “bridge troll” (wild rainbow hair and all)–but the actual demands are mildly frustrating. In this case, you either have to have to convince at least two friends to play or shell our four of the premium “MPP bucks” to proceed, and by this point, you’ll probably only have three if you haven’t spent any. It’s not such a bad deal, though. There’s a small chance to gain MPP bucks just by playing, and considering that 15 of them only cost $2.00, they’re not exactly robbing you, either.

Still, it’s a little unfortunate that Mini Putt Park has a conventional energy system, although it softens the punch by presenting that necessary evil of social gaming in two forms. Your standard stash of energy, for instance, lets you advance through the campaign and play individual holes; your “frenergy” count lets you play on your friends’ courses. Majesco gets you on the frenergy, unfortunately. If you want to play on of the community’s top-rated 18 hole courses, you’ll have to put down 18 frenergy points, and yet only have 16 points around the time the options becomes available. Want to try Matt Ondish’s magnificent Slaughterhouse course? Then expect to pay up a couple of extra MPP bucks. 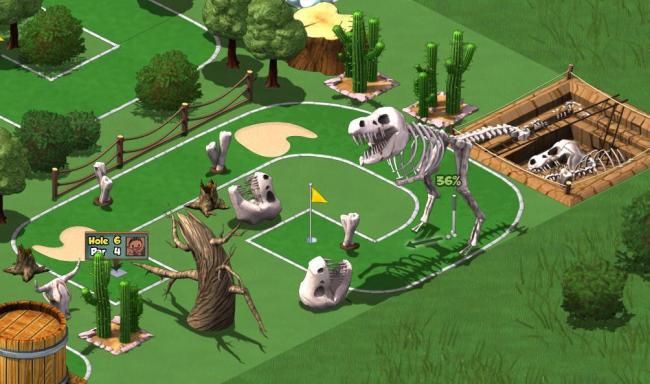 It’s also more than a little surprising that a couple bugs are still floating about Mini Putt Park, particularly since our first preview appeared all the way back in March, and many features still haven’t been implemented. Some of these, such as leaderboards and tournaments, could go a long way towards boosting the game’s popularity. What’s more, there’s no option to rotate the view of the course while you’re playing for a better look your next shot, and the resolution gets painfully pixelated if you zoom in enough to get the best possible view of your next putt.

But it’s hardly a bad game, and indeed, I’ve have more fun playing Mini Putt Park than I’ve had while playing many other energy-based social games over the last few months. A couple of patches could fix most of the issues I’ve touched on here, but since we’ve already spent the better part of the year waiting on the game to get to this point, those issues might be a long time coming.