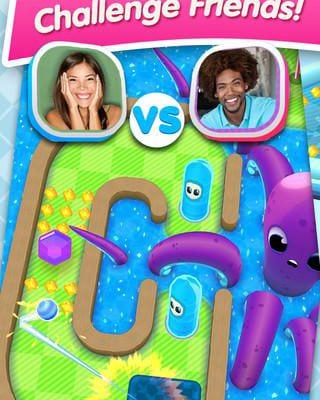 Putt putt for the fun of it!

Do you remember Words With Friends?  Sure you do!  You’re still playing games inspired by it to this very day — and I’m not necessarily talking about word games, either.  Draw Something, Song Pop, Hero Academy; despite their wildly different play mechanics, all of these games share a common bond: push-based multiplayer.

The latest game to take the push-based crown on the App Store is centered around a tradition that’s as American as apple pie: miniature golf.  Mini Golf MatchUp brings the competitive nature of putt-putt to your touch screen devices, embracing a style of turn-based multiplayer that mobile gamers have come to know and love in recent years.

You’ll partner up with a friend (or stranger) to play a few rounds, utilizing the “pull back and release” method of control that was first popularized with Angry Birds.  This will allow you to aim your putter and determine the power of your swing.  It’s simple, intuitive, and precise. You’ll never feel the controls are at fault when the ball doesn’t go where you want it too.  Sorry Lee Trevino – that bad putt is on you.

Unlike regular miniature golf, where the object of the game is to get the lowest score possible, Mini Golf MatchUp embraces its video game roots.  You’ll be going for a high score here, with points being awarded for coins and gems collected, as well as how few strokes it takes you to sink your putt (the fewer strokes, the higher the score).  If you manage to get a hole-in-one, you’ll get double the points on the next hole.

As you might have expected, the holes here aren’t always as cut and dry as they might be in real life.  You’ll find yourself presented with tough, crazy challenges from time to time, like a gem that can only be collected by knocking your ball over a deadly drop, or patches of course that will push your ball into the opposite direction.  Having said that, the courses feel rooted firmly enough in reality for the most part.  Whether or not that’s a good thing is up to you. 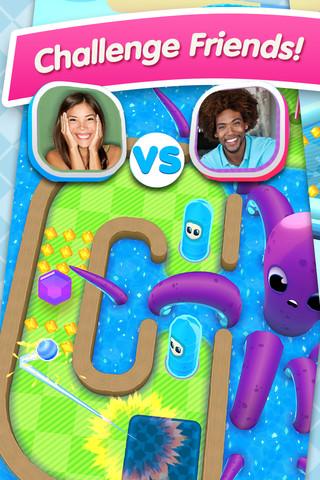 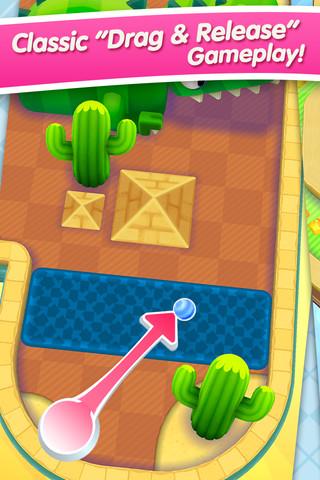 Yet while the courses may be well-designed and fun to play on, there are too few available for play.  Additional courses can be purchased using in-game currency, but unless you’re willing to shell out real cash or wait an awfully long time to earn it, you’ll find yourself repeating the same holes over and over again.  Sure, this’ll give you the chance to perfect your play on each hole – but once you’ve done that, you’ll start to grow tired of the same old miniature greens.

Speaking of shelling out money, Mini Golf MatchUp manages to secure it’s free-to-play nature through a heavy dose of ad-support.  Normally this wouldn’t even earn a footnote in a review, but the ad frequency is so aggressive in MatchUp that it’s bound to turn some players off.  It’s not uncommon to complete a hole and then be forced to sit through a 30 second video commercial.

Like most games of this nature, there’s an option to buy your way to an ad-free version.  With Mini Golf MatchUp, this is a feature I can’t recommend strongly enough.

Of course, the reason you’ll want to buy it is because this is a game that you’ll be playing a lot.  Familiar holes and heavy ad rotation aside, Mini Golf MatchUp is a fantastic little game that will easily scratch that turn-based itch that so many gamers seem to have developed.  With simple-yet-satisfying controls, a fun and poppy art style, and music you’ll no doubt be humming in the shower, it’s time to admit it: virtual mini-putt is your next great mobile addiction.