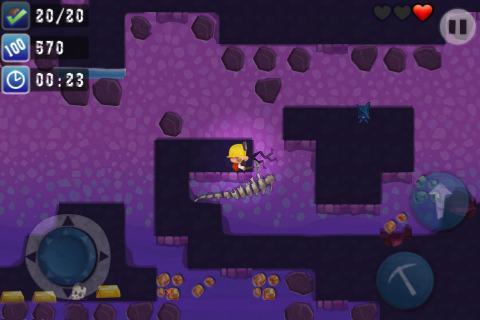 Many moons ago, people everywhere were hooked on a game called Dig Dug. In it, you played as a miner out to snag as much treasure as possible while defeating the baddies along the way. Miner Disturbance for the iPhone is like an updated, upgraded version of that arcade favorite, and adds a dose of challenge to the old formula.

Miner Disturbance doesn’t really have a story, nor does it need one. Our unnamed spelunker travels from mine to mine, uncovering as much bountiful booty as he can by running, jumping and digging his way through each. Successful exploration earns money to buy new and upgraded equipment so he can challenge new mines. There are 25 mines to dig through, but that’s hardly all that Miner Disturbance has to offer.

Each level has three challenges, be it dig to a certain depth, achieve a certain score or complete the other challenges within a time limit. Doing so earns you more cash to buy more items. Additionally, there are special hidden artifacts that you can unearth and display proudly in the town’s museum.

Different zones of Miner Disturbance feature hazards to challenge you, from flooded caverns to underground lava pools and cave-ins. Also, the deeper you dig the darker it gets. There are even different enemies that try to harm you as you go.

Once you’ve earned some gold coins, there are a lot of items to purchase. Upgrades include being able to double-jump, walk on lava, breathing longer underwater or seeing more of the cavern in darkness. Most of these items have three levels to upgrade, so those coins will definitely come in handy. Later levels simply cannot be conquered without them, so be sure to complete all those challenges in the early goings. There is also a volcano challenge level, which allows you to explore a never-ending stage and share the highest scores and deepest depths with your friends. Naturally, the better-equipped you are, the further you can go.

In a huge surprise, Miner Disturbance features one of the best onscreen touch-based joysticks in an iPhone game. It’s startlingly responsive and accurate. The simple graphics depict the mines with enough detail and clarity on the small screen that you’ll never wonder what hazard you’re facing. The tunes, few that there are, are of high quality and ambience. The town has a nice spaghetti western sound, while the mines are dark and mysterious.

The main issue with Miner Disturbance are the action controls. There are only two buttons, one for jump and one for the pickaxe. Unlike the joystick, they feel spongy and unresponsive. Tapping the pickaxe button creates a small but annoying delay. You’ll get used to it, but it would have been better to not have had it at all. Also, when working underwater, sometimes your miner will take off for a swim when you want him to pick at an upward angle, causing either fatal delays or annoying cave-ins. Again, this can eventually be compensated for, but is a niggling nuisance nonetheless.

These minor faults do nothing to wreck an otherwise great iPhone arcade game. Throw in some OpenFeint achievements and leaderboards, and Miner Disturbance shines like mined gold. If you’re itching for a fun challenge on the go, dig into it.