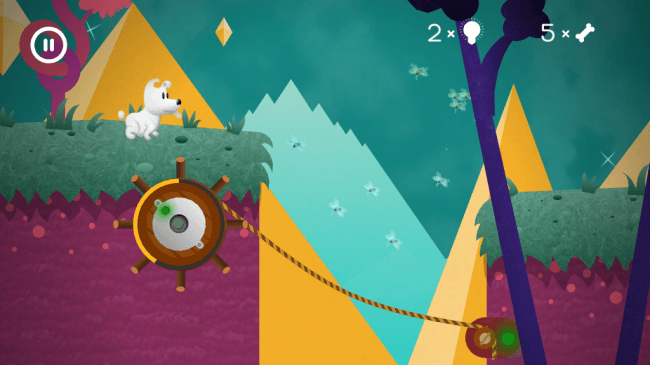 Mimpi is a gorgeous and whimsical platform-adventure with touchscreen controls about a little white dog who discovers one morning that his master has gone missing. So like any good dog, he decides to venture out past his peaceful home and scour the dangerous lands of the earth to find out just where his master went off to.

The story and presentation are some of the biggest strengths here in Mimpi, as everything gets told completely without dialogue, and actually gives you a deeper sense of engagement in both the characters and the narrative than most text-heavy games do these days. The graphics are wonderfully bright, with an almost paper-like quality to them at times, and Mimpi’s animations are especially fluid and adorable as he hops and platforms along hills, logs, sleepy fish heads, and everything else you can think of in between!

But the big twist here is that a lot of objects in the game environment can actually be moved and manipulated by the touch of your finger: something you’ll be needing to do a lot of if you want to traverse most of the game’s trickier platforming sections and puzzle scenes (not to mention the odd and rather out-of-place hidden object scenes you’ll be asked to complete at the end of each larger level).

The visuals and world design are the true shining stars here in Mimpi, as everything feels like one enormous and interconnected sidescrolling stage, that takes you through all sorts of different environments from hillsides and forests, to beaches and underwater caves (Mimpi gets to ride around in a giant air bubble during these sections). It’s true that you’ll never see the same location twice in the game, and the optional bone collectables provide an extra splash of challenge, which unlock cute comic strip stories in the gallery; in addition to the rarer light bulb collectables, which give you an extra hint when you need some help on how to proceed.

Unfortunately, a lot of the time the platforming and world manipulation segments work much better in theory than they actually do in execution here in Mimpi. One of the more common uses of these intertwined gameplay mechanics is in moveable clouds that you’ll have to drag into position to help Mimpi reach higher ledges or faraway platforms. But of course, you can’t move the clouds if Mimpi is standing on them, so you’ll need to hit the jump button, quickly move the cloud into position, and then use the directional buttons to adjust Mimpi’s landing on the freshly-moved cloud, all within a mere second or two.

Yes, it gets as awkward and frustrating as it sounds, and the constant switching back and forth between the actual input controls and the objects you can touch in the game world becomes a huge stumbling block in the overall experience. And then there are the straight-up puzzles in the game, which are always devoid of any kind of instruction or indication that they even are, in fact, puzzles. Oh, the puzzle designs in this game.

While most of the puzzles in Mimpi have a good amount of variety to them, the majority of solutions are incredibly frustrating to figure out on your own, and the real dearth of hint light bulb collectables that get dispersed throughout the game world becomes immediately apparent after these areas. For instance, sometimes everything you’ll need to complete a puzzle will extend beyond a single fire hydrant checkpoint: forcing you to backtrack in the game, in hopes that some required events that are needed to move forward will trigger again (sometimes they will, and sometimes they won’t).

Considering how cumbersome it is for Mimpi to travel backwards along the slowly panning screen, sometimes the only option is to go back to the level select screen and start over from a previous checkpoint. That is, of course, if you have any idea that you even need to backtrack, as most puzzles in the game are so vague and illogical that it could be anyone’s guess as to where and how you’re expected to solve it. 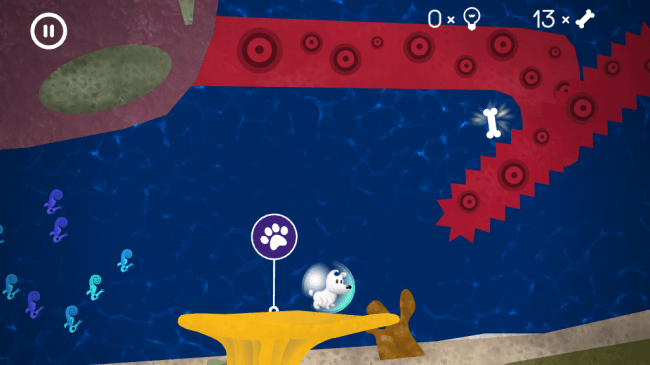 And I’ll tell you something too: I almost wasn’t able to complete my review of the game at all this week, because I got horribly stuck on one particular section in level two, where I came upon an impassable sailboat on the surface of the water, with Mimpi trapped in his air bubble in the water down below. I remained at this spot without a clue for several days, having literally tapped on everything around me, my supply of light bulb hints completed depleted, and no means to buy additional ones due to a strange non-localized in-app purchase menu.

It took some deep scouring of the internet to finally figure out how to proceed, and I’ll tell you that it involves another one of those backtracking instances that I outlined just above, and I’m still trying to wrap my head around the actual logistics of what the game decided to be the solution in this case. And sadly, I would only make it to a handful of other fire hydrant checkpoints beyond this until I hit another brick wall and had to jump back onto my computer for help again. 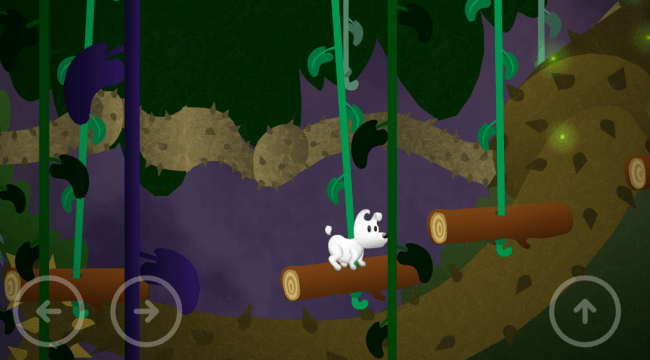 As a basic sidescrolling platformer game, Mimpi especially shines in its creative and colorful design, full of massive level landscapes that seamlessly blend into one another and constantly create a sense that you’re venturing farther and farther from home. However, it’s during the moments when the game tries to incorporate its interactive world and puzzle elements into the actual platforming that things start to go haywire.

Not only is it a lesson in patience to try and navigate the two different control schemes needed at once to complete some of the platforming segments, but most of the puzzles themselves go beyond the infuriation of “adventure game logic.” So whether or not Mimpi finds his master at the end of the day, he’ll have certainly traversed a great deal of imbalanced odds along the way: in the shifting platforms themselves, and the actual gameplay design.