By Leif Johnson | 12 years ago 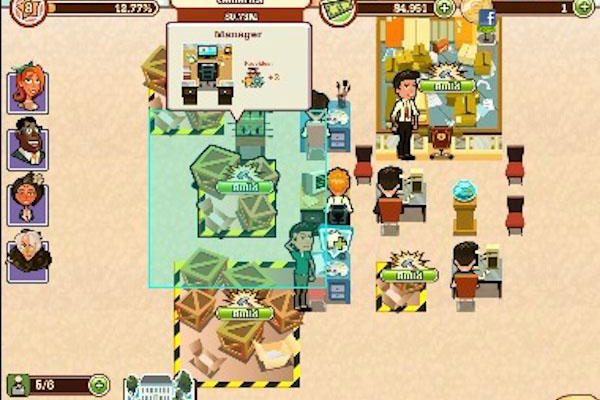 Profit and performance issues await you in Millionaire Boss

Two powerful lessons stand out in Digital Chocolate’s Millionaire Boss. The first, as you’re told early on in the game, is that you have to spend money to make money. The other, which goes unsaid, is that it’s not what you know, but who you know. While other office titles have tossed around these motivational poster mainstays for years, few have taken them to the literal extremes found in Millionaire Boss. You’ll need plenty of friends and Facebook credits to make it to the top here, and some unfortunate technical issues render the game as demanding for your CPU as for your management skills.

The story is promising enough. After being fired from the diabolical LootCo, you step out of an elevator as the new CEO of your own fledgling company. Your goal, quite simply, is to make a mountain of cash and steal all the business away from Lucinda Loot back at LootCo. (Perhaps it was this trait that got you fired in the first place.) As you progress through loads of helpful quests, you assign avatars of your Facebook friends to management and general positions and diversify them into fields such as art, tech, and the like. Gameplay then revolves around giving each of these workers a task that can take anywhere from a minute to a day depending on your level. Longer tasks, of course, yield greater financial returns and experience, and you can foster productivity through positioning your management and decorations effectively to improve your workers’ happiness and trigger a simple leveling system for each skill. 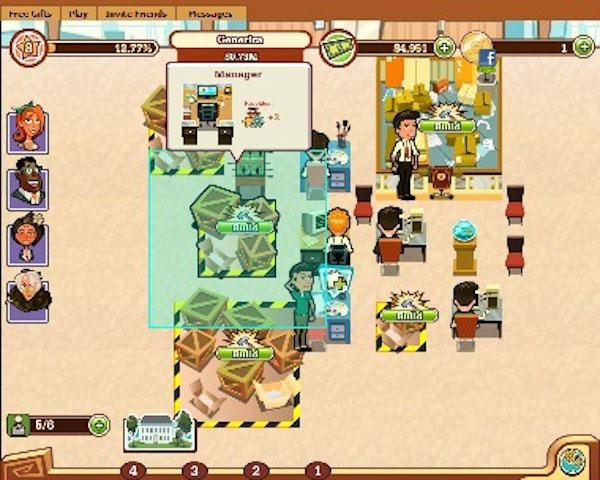 The rough spots appear once you try to increase your workforce. You can only do so if you’ve reached the requisite amount of perks (such as a humble copying machine or the decidedly less humble “Statues of Epic Epicness”), and you’ll quickly discover why there aren’t more workplace wonderlands like the Googleplex in the process. It’s easy, for instance, to purchase the first three or so perks, but getting enough to hire a seventh worker takes a mountain of virtual cash. That’s where you’ll probably need to spend real money to make virtual money. For at least 30 Facebook credits, you can simply buy a perk. But even if you’ve bought your other perks with in-game money, you still need to acquire specific parts or Facebook friends in order to complete them and, to make matters worse, you won’t even know which parts you’ll need until you buy the perk. That means you’ll need decent number of Facebook friends playing the game so you have a decent pool from which to request the necessary items. If you don’t buy these items outright with credits, the unfinished construction projects that emerge leave your office looking like fair game for an OSHA task force.

Don’t have a bunch of Facebook friends who play or a willingness to fork out a chunk of credits? Then your office may never morph beyond its original cramped existence. Yet these limitations wouldn’t be entirely intolerable (it is, after all, a social game) were you not also subjected to long load times and a monstrous appetite for your computer’s memory. These problems chiefly pop up when you visit the offices of your Facebook friends who play, where we’ve seen Millionaire Boss smother a computer that’s designed to capture high-resolution video footage from MMORPGs. Elsewhere, certain actions fail to register. When you visit the two freebie NPC offices, for instance, your daily mission to motivate five of their many employees rarely works at all. 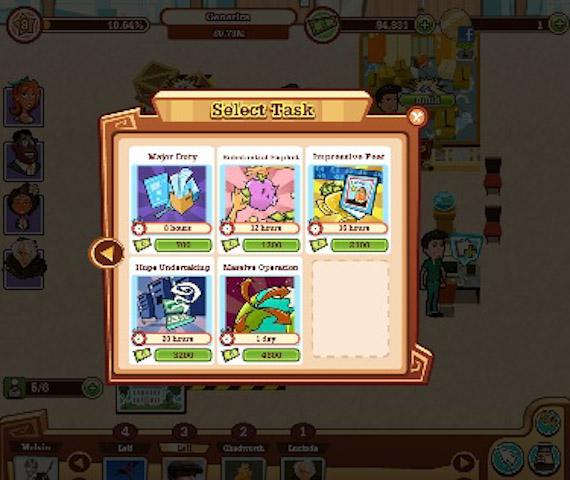 Millionaire Boss still feels very much like a beta at this point. An upcoming “Dream Mansion” that could alter the game’s flavor is still in the works, and the current avatar creation menu remains a little short on options. The art and music styles are fun but average, and the progression through the multiple quests feels comfortable but only mildly engaging. That said, Millionaire Boss undoubtedly instills a sense of excitement once you get a steady stream of cash coming in from your workers. If Digital Chocolate can bring that excitement in line with the rest of the game, then we’re quite prepared to believe that Millionaire Boss could approach the studio’s Millionaire City in terms of popularity.