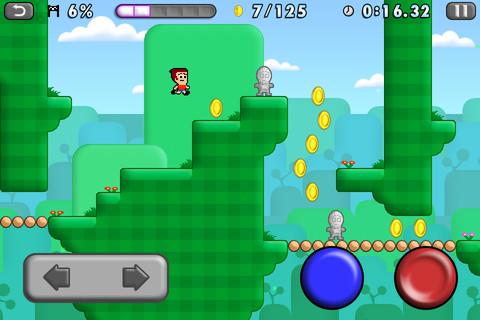 Hey Mikey, I think we like it! A lot.

If the App Store is today’s arcade, Mikey Shorts is its shiniest new machine: a wonderful time sink that hasn’t forgotten the principles of giving back to its players. This is a title pared down to precious few actions, but designed so well that nothing ever gets stale. A glowing, beeping slice of pure, simple fun.

Fitting then, that the idea came from two gamers who bonded over a mutual love of Hook Champ. Their experience affirms the value of modern classics as much as it cements the place of the older ones. Meanwhile, their creation lives in the space between Mario and Mos Speedrun, borrowing from the ethos of both to deliver something deeply playable by gamers of either era.

In Mikey Shorts, your goal is to run. And jump. And slide. Certainly there’s a thinly veiled story here about the need to save your people from an alien-induced slumber, but like any thin veil, it’s designed not to get in the way; to be cast off. Aliens, turtles, friends, princesses: this is another in a line of mechanics-driven affairs. Stage by stage, you hop across hills, platforms, and chasms at breakneck pace, awakening enough stoney human totems to pass through the locked energy gates, collecting coins along the way. And from the moment you hit the ground, Mikey Shorts does not let up or disappoint.

The masterstroke here is level design. It’s not enough to put a timer at your back, because devoid of any adornment, a game like this needs a rock solid foundation around which to wrap its simple commands. That’s what Beavertap Games delivers. Every platform, incline, tunnel and chasm is arranged to strike a balance between fun and frustration, lulling you into a primordial button-pressing rhythm while demanding your utmost attention. Collecting three stars, setting global records, besting yourself: all of it is dependent on mastering a dance of skill and spontaneity.

The pay off is the kind of satisfaction you can only get when something tickles your gamer nostalgia bone just right. Eeking in under the time limit necessary to earn three stars – even if it’s taken you ten tries – never feels repetitive. In Mikey Shorts, you only remember the run that goes your way. Meanwhile, traversal itself makes you feel like an acrobat. The game’s virtual joystick defies all odds to prove completely responsive, making it easy to establish a flow, chain jumps into slides, and swerve around corners as you drop from above. Huge bonus points to Beavertap for making the position of your arrow and action keys fully adjustable! And while we’re at it, let’s toss out some more points for the use of split time measurement. Seeing how many  milliseconds lie between a record and a mediocre run does wonders for the game emotionally.

I can pay no higher compliment to Mikey Shorts than to say that the best timed jumps and the hardest chasm crossings put me right back in specific levels of the original Super Mario Bros. Some of this is certainly by design, as the game’s grassy first world transitions into a sandy dessert, through an underwater stage, and – eventually – leads to a lava-filled wasteland. Most of it, though, comes down to expert craftsmanship. Tons of effort has been spent making sure the game’s layouts feel effortless, and the result is a play experience that draws out the sense memories of a gaming childhood.

Less interested in a wild trip down memory lane? The game offers players looking to avoid stress the chance to treat Mikey Shorts like a slower paced platformer, adding achievements and rewards for collecting all of a level’s coins, or scouring to find the hidden “golden shorts” token. Somehow interested in more stress? A challenge mode unlocked part way through play gives you 48 stages whose only goal is to beat a clock ticking downward instead of upwards. Here, mobile developers should take a lesson from this fledgling team, which has mastered the art of adding real value to “replay value.” During the review process, I would frequently find it impossible to ignore a replay opportunity after coming in three coins shy of a perfect score, or spotting tantalizing spinning summer wear just out of arms reach. At risk of painting this to be the “kitchen sink” game, Mikey Shorts really earns its “something for everyone” cliche. 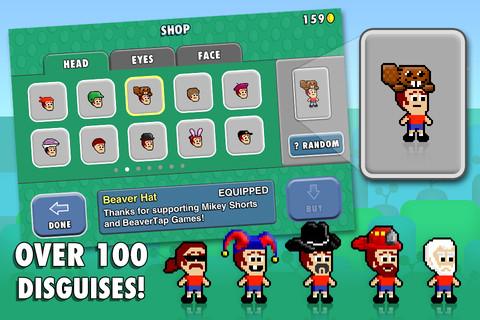 And that includes Mikey! Beavertap has taken a page out of idol Rocketcat Games’ book and added an in-game store packed full of alternate headwear, eye wear, and facial features which allow you to save the world in style. Mr Potato Head style. No, there’s not anything crucial about beating your previous time wearing 3D glasses, a Santa hat, and a wizard beard, but…isn’t there!? And because the development team is allergic to money, all in-game items are bought exclusively with coins earned during play, with many given away for free as rewards for achievements and milestones.

In an environment full of backlash against overly aggressive in-app payments, misleading pricing, and games bereft of real play, Mikey Shorts is refreshingly simple, and completely earnest. A one-dollar experience that gives you everything upfront, and surprises you with so much more. Welcome to the App Store Arcade, Mikey. You’ll fit right in.