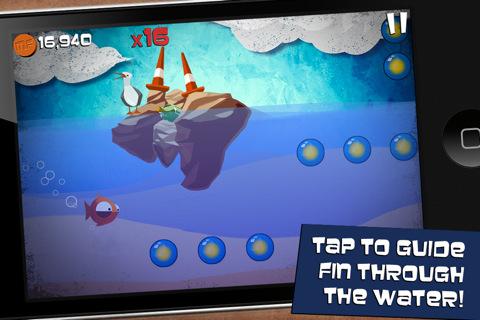 Launching Pad Games is a development studio full of surprises. After launching the sublime Scarlett and the Spark of Life late last year, few would have ever expected them to work on anything other than that game’s follow-up. With a critically acclaimed adventure game under their belt, why would they be working on anything else? Yet this small but talented group of developers decided to roll the dice and take a stab at a wildly different genre. An underwater take on the endless-running platformer, Mighty Fin was well worth the gamble.

The tale of an exhausted fish who has purchased a round the world vacation, Mighty Fin feels as familiar as it does original. The game employs the simplest of all control schemes, forcing players to control all of the action by holding a single finger on the screen. Pressing your finger will cause Fin to dive deeper into the water, while releasing go will see Fin buoyantly forced up and into the air. Fans of Tiny Wings may be quick to cry similar – and in many ways, it is – but in working against the buoyancy of the water, Mighty Fin becomes Tiny Wings in reverse.

And that’s about where the comparisons to Tiny Wings ends. A simple endless affair about a birdy trying to take flight, Tiny Wings doesn’t offer players the danger, variety, or hats that Mighty Fin does! Players here will have to use the simple one touch controls here to guide Fin through tight crevices and around obstacles to help him avoid untimely death, be it on the nose of a submarine or in the belly of a penguin – we’d like to see a fat little bird try that!

What’s more, Mighty Fin offers a series of levels instead of a single endless stage. This in turn gives players a definitive goal to complete. After each stage is finished, players will have the option to replay it endlessly or, if they’d rather, stick with the original level and try to earn enough points for a gold medal. For fans of the genre, it’s the best of both worlds.

Adding to the replay value is a collection of costumes that players will find hiding throughout the game. The game features 24 costumes, from afros to earmuffs, and tracking down every last one of them is bound to keep players busy.

Most importantly though, the game plays great. You can really feel the resistance of the water, and the speed at which Fin moves means the next deadly encounter is always a moment away. The developers have placed a series of coins throughout each level, and in addition to increasing your multiplier, they also provide players with a safe route to try and stick to. There’s no question about it – Mighty Fin is a joy to play. 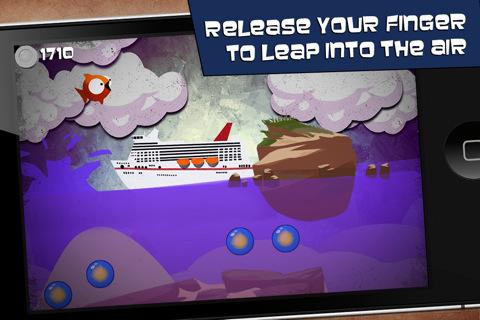 Still, the game isn’t without a few disappointing quirks. For a release with only eight levels, you’d expect them all to look original – especially in a game about touring the world – but Mighty Fin uses each set of art assets twice. This means that, while there are eight levels to play there are really only four to look at.

And in terms of difficulty, Mighty Fin doesn’t really provide much of a challenge. We were quick to grab the gold in nearly every level, and rarely had to play a stage more than once to complete it and move on. Since part of the replay value is in trying to unlock the top medal, the ease with which you can do it doesn’t do the game any favors.

Still – with great one touch controls, unlockable endless modes, and more costumes than you can shake a stick at, Mighty Fin should keep gamers entertained for far longer than it has any right to. If you’re looking to enjoy a new twist on a familiar formula, Mighty Fin swims up all the right streams.