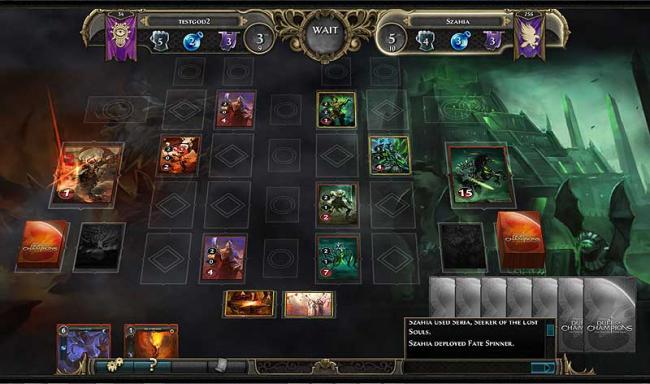 Playing multiplayer card games can often be a mixed bag. For example; great artwork and fun mechanics are sometimes easily forgotten when squaring off against an opponent with a seemingly infinite supply of powerful cards. This is the main reason I can appreciate Might & Magic: Duel of Chamions. Even the toughest cards can be brought down with some careful planning.

The Might & Magic world is in turmoil as battles rage across the land. Of course battles are never not raging, it seems. Still, it’s an excuse to get players building 60-card decks and dueling. The rules are numerous but not particularly complex: players must whittle down their opponent’s hero’s health in order to win a fight. In order to do so they must make the best use they can of their monsters, enchantments, spells, and other various tide-turning cards. Positioning and monster “type” is also very important as melee units can only go on the front lines, shooters only in the back, and flyers pretty much anywhere there’s space. Unless specific abilities say otherwise each creature can only attack horizontally along the same column it occupies, and if there aren’t any meat shields blocking them it’s a straight shot to the rival hero.

It’s important for CCGs to sport some impressive illustrations, and Might & Magic: Duel of Champions has that part down. Each spell, monster, and so on looks great even if the “dark fantasy” theme is a little heavy-handed. It’s also important for a game to be accessible, which isn’t a problem here. The interface is full of helpful indicators that show players at a glance what they can and can’t play as well as what resources they might need to make use of. Of course the most impressive bit (for me, anyway) is the actual playing of a match. Each turn, in addition to playing cards, the hero can take an action that ranges from increasing overall magic power to drawing more cards. There’s a fair bit of consideration to give to these values as certain spells require a specific amount of magic to work, while some creatures need significant amounts of might to put into play. This resource element coupled with the many low-tier cards that can be surprisingly effective if used at the right time means fortune typically favors sound tactics over brute force.

Being a CCG with a large focus on player-versus-player dueling, it’s not too much of a surprise to find the solo campaign lacking. However it’s still a bit disappointing. Even after the tutorial is complete it still feels like an extended tutorial/practice mode. The one upshot to this is that it’s a good way to earn some extra gold to buy more card packs. Of course the card packs are another sore point for me. Since players have to select a faction at the start of the game they’re sort of “locked-in” to a specific set of cards. There’s a certain amount of overlap between factions, sure, but it’s still pretty irritating to drop a ton of gold on a pack only to end up with half of the cards being unusable. And I’ve yet to find a way to dump/sell off the cards I can’t use. Incidentally, the interface for acquiring these somewhat disappointing card packs is also rather clunky.

Might & Magic: Duel of Champions doesn’t one-up every other iOS CCG on the App Store, but it’s certainly a strong contender. Even with the lackluster campaign and disappointing card exchange it’s a gun game. Especially when playing against other people thanks to a competent and even matching system, and gameplay mechanics that don’t immediately penalize someone for not “paying to win.”