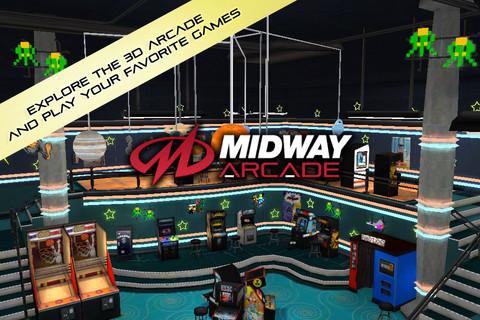 It doesn’t match the real arcade experience, but Midway Arcade is a decent iOS collection of classics

I remember playing arcade games in an arcade. Not in a funplex, or brightly lit birthday center mind you, but in a dingy, dark, cavern of cacophonous sounds and flashing lights. So I bring a certain amount of expectation to these “retro” collections, and Midway Arcade is no different.

The games are spread around a virtual arcade that serves at the game’s menu. You hit left and right to move from cabinet to cabinet and select the game you want to play. There are some pretty legit sounds playing in the background that really make it feel like an old-school arcade.

The virtual room as menu, though, is weird. It’s not efficient. Instead of a menu list, if you want to play a particular game, you have to tap, tap, tap over till the camera swings over to it. Also, if you’re trying to simulate the feeling of walking through an arcade, you really shouldn’t have the camera sail through the air and swing around like it’s a crane shot. It breaks the illusion.

My initial impressions of Midway Arcade weren’t very good, but it turns out I picked the worst two games control-wise to start with. It’s a shame, as, A.P.B. and Spy Hunter are two of my absolute favorites from back in the day. But the gyroscope-based steering is poorly implemented and, in my opinion, renders both games unplayable. So buyer beware if you’re thinking about buying Midway Arcade strictly for those two titles.

The games that don’t incorporate said gyroscope controls usually fare much better in the playability department. The more “classic” the game, the better it plays, thanks in no small part to the fact that older games routinely had simpler control schemes.

Root Beer Tapper and Defender play especially well, and after a decent amount of time, I almost forgot that I was controlling the games via touchscreen. Almost. It still feels a bit “off” but really, that might be my inner purist talking. I’m old enough to have very clear memories of playing all these games in their natural habitat. 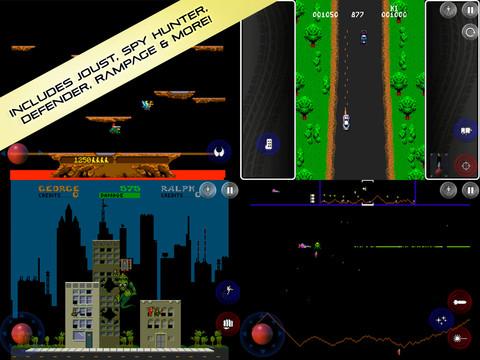 The only game I enjoyed completely was Joust, which I chalk up to its single button and left/right controls. They’re implemented well and the gameplay is spot on.

Really, all the games in the collection are emulated well. They all look and run like the real deal. There was clearly some time and effort put into the title, and controls were thought out and implemented the best they could be. Over the last few days I have found myself migrating back to the title, and will continue to do so.

However, playing Midway Arcade left me wishing that it supported either the iCade or the Atari Pro Duo controllers. No matter how well-implemented the control schemes are, these games were built with a joystick and buttons in mind. At the end of the day, that’s the only true way to enjoy them for all they’re worth. Still, Midway Arcade is a solid collection given the price.