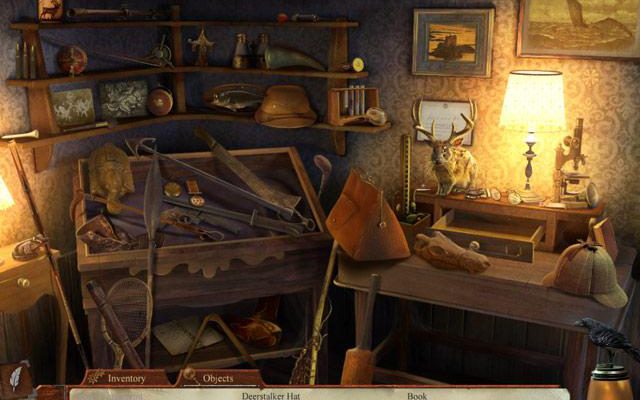 Midnight Mysteries: Haunted Houdini is one of the best installments in the franchise

In this fourth installment in the Midnight Mysteries series, things take a magical twist, as the ghost of Harry Houdini’s widow Bess comes to you for help in reuniting her spirit with that of her lost love. A plan to reunite via séance (what would have been Houdini’s ultimate trick – his spirit surviving after death) was spoiled by those also associated with Houdini’s death. In Midnight Mysteries: Haunted Houdini, you’ll solve the mysteries associated with Houdini’s death, and find the culprit(s) ultimately responsible.

As has been the norm with the series, the story here takes factual information about the life and death of Houdini (that being his death of peritonitis after his appendix burst) and combines it with a murder mystery. More point and click adventure than a hidden object game, the hidden object scenes are fairly light, but are very nicely done with mostly large objects and crisp graphics. Scenes contain hot spots, hiding other items, but you can also click on each object in the list to see a silhouette at the side of the screen.

With Houdini’s home as your “base” of sorts, you’ll perform séances, speak with spiritual mediums, and learn the significance behind certain tarot cards. You’ll also be given the ability to play carnival games or perform magic acts along the way, like one that sees a ghostly female being sawed in half, or card tricks that actually ask you to participate as the “pawn.” Unfortunately, some of these activities don’t work as intended, as they rely too much on your own actions outside of the game (counting in your head or moving your mouse pointer at varying speeds, as examples), or just don’t react when you click in the right area (for the record, a bottle mini-game in the carnival section of the game is particularly flawed).

The story plays out through lengthy dialog sequences, and introduces other famous spirits like Arthur Conan Doyle who have plenty to add to the (truly interesting) storyline, but as many items are shown in bigger detail after collecting them, it can be incredibly easy to accidentally click on the screen and skip some of these dialog boxes, when you really just meant to remove the item preview from the screen so that you could continue playing. 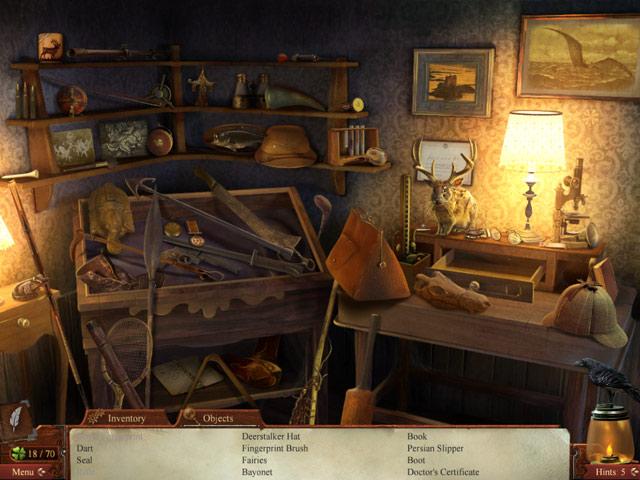 As for the game’s puzzles, you’ll complete these using items you’ve taken from each environment or from hidden object scenes, and will sometimes need to combine items before being able to use them. For instance, when recreating the hospital room in which Houdini died, you have to repair blood pressure machines and IV stands (as two examples) by combining the items in the inventory bar (if you try to combine two mismatched items, they’ll simply flash red and go back into your inventory). The puzzles themselves are highly varied, and may be incredibly simple (jigsaw puzzles, for instance) or equally in-depth (two puzzles offer complicated versions of Picross or Minesweeper, but aren’t overly challenging).

Returning from previous installments are the hidden collectibles, as Ravens serve as your hints, which can be stockpiled and used in bulk if you really get stuck (the hints work well even outside of hidden object scenes, navigating you back through the environment and clearly highlighting your next task). Hidden clovers also help you unlock the never-ending hidden object mode back at the game’s main menu.

With Midnight Mysteries: Haunted Houdini, the gameplay continues to be as polished as ever in the series, with a great attention to the real-world story’s detail (in-game locations are incredibly accurate, based on what is known at large about the life and times of Houdini). The game’s puzzles, which in previous installments have been known to be a bit too complicated, are easier to complete now thanks to lengthier instructions and the Deluxe version’s mini-strategy guide, and while some of the magic elements in the game work against the game’s favor, this is still an improvement over Devil on the Mississippi. When a sequel is better than its predecessor, you’re already dealing with something special, but Haunted Houdini is definitely one of the best installments in the franchise.