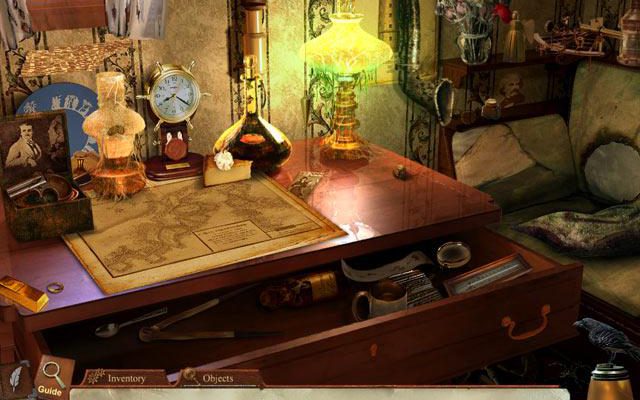 Help save Mark Twain’s spirit from the Devil in this literary, spooky offering from Mumbo Jumbo

Midnight Mysteries: Devil on the Mississippi is the newest in the now established series that has taken us through the Salem Witch Trials and the Edgar Allan Poe Conspiracy. This time, you’re approached by the fleeing ghost of Mark Twain, who begs you to free his soul from demons, both literal and emotional, brought on by actions in his former life. Through a fairly convoluted storyline, we see Twain’s life take a turn for the worse when he questions Shakespeare’s validity as a playwright, and its up to us to solve two mysteries before all is said and done.

The story in Devil on the Mississippi is just as important, if not more so, than the rest of the game, so it’s disappointing that it’s not presented in a more clear-cut fashion (along with the fact that you’ll do a lot of reading, since there’s no voice acting). There are plenty of times when the story’s many layers overlap, dealing with everything from Shakespeare’s relationship with Christopher Marlowe (one man whom many believe was the real author of Shakespeare’s earlier works) to Twain’s issues with money, the deaths of his children, his brother (which Twain felt he could have prevented due to an earlier premonition) and so on. 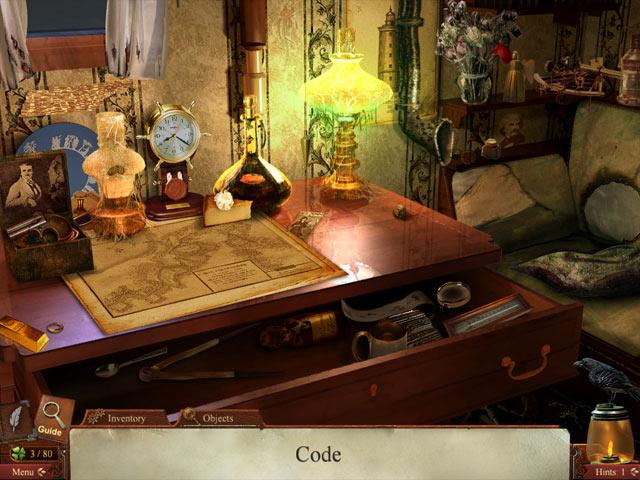 All of these story elements are combined through time travel, as you make your way through not only Twain’s life in the 19th century, but also the time of Shakespeare and Marlowe in the 16th and 17th centuries. The environments are themed appropriately for the times, and the graphics are dark and spooky, setting an eerie, desperate tone throughout, which is a good thing.

Connecting each time period or chapter in the game is a fairly wide array of hidden object scenes and puzzles. You’ll be able to freely move about the environment, and will have to revisit areas frequently to make sure you’ve found everything. This would have made an “All Clear” distinction very appreciated, but sadly, you’re on your own. The hidden object scenes themselves aren’t overly cluttered, and the only objects that are truly hidden are those inside drawers, pockets and the like, which must be opened by clicking when your mouse cursor turns into an eye.

After each scene, you’ll retain one or two objects that are used elsewhere, as you interact with all manner of ghosts, from Tom Sawyer down to Shakespeare himself. Frequent puzzles break up the hidden object and adventure gameplay, but these puzzles are fairly two-sided in their execution. There’s a wide variety here, ranging from the classic tile sliding or symbol matching puzzles to those that see you filling out a Venn diagram or even playing a game of pool. While some puzzles are self-explanatory, there are others (like a numbers puzzle that resembles Sudoku, but actually isn’t) that come with no explanation and are therefore incredibly difficult to solve. 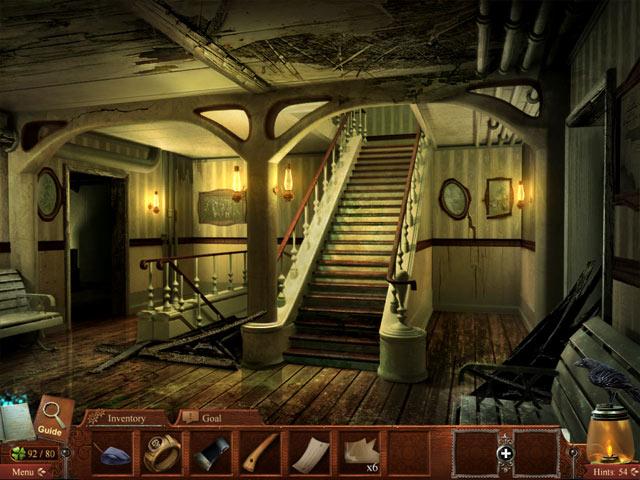 Along the way, you’ll have two over-arching collection tasks, as four-leaf clovers and ravens are hidden in most environments. Collecting 70 clovers will unlock a new gameplay mode outside of the story allowing for never-ending hidden object scenes, while the Ravens are your hints. There’s fortunately no limit stating that you can only hold three or four hints as in other games that use this mechanic, so you’re free to stockpile them and wipe out an entire HO scene using nothing but hints if you feel so inclined.

All told, Midnight Mysteries: Devil on the Mississippi has its flaws, but if you can stick with the game long enough to begin to understand the story (not an easy task), the game’s dreary, yet enjoyable locales and challenging gameplay should be enough to overtake its other issues.