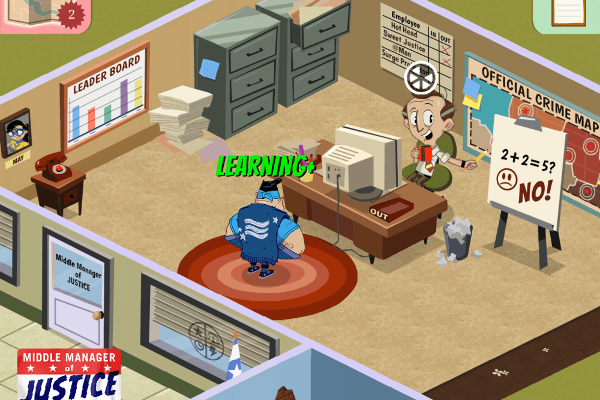 The business of managing superheroes has never been so adequate!

Double Fine is well-known for its quirky sense of humor, and Middle Manager of Justice is a shining example of that. Instead of an exciting, running out and saving the world action game, you get to sit indoors managing heroes, shuffling paperwork, and ensuring every justice request form is met with the appropriate (and fiscally responsible) action. Do a good job and maybe you’ll get a ten on your evaluation form!

Oh, the life of a middle manager. It may not be a glamorous gig, but it’s safe, and in your own nerdy way, you’re saving the world, right? The first day on the job you’ll take your seat at the desk and get the papers shuffling, answering your first call for justice as soon as you hire a hero. Send him/her to the streets where none other than Captain Premium himself will show you the ropes. Once the baddies have been vanquished, gather your experience, collect your coins, and be thankful the supervillain Skullface has so much work to do that he can’t tousle with you at the moment. 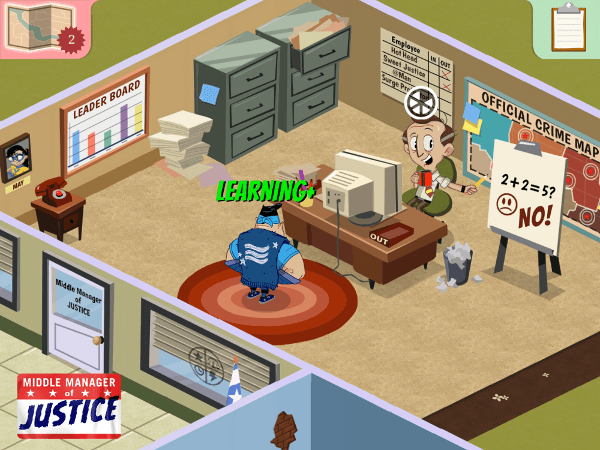 You’ll spend most of your time in Middle Manager of Justice working in the office, training superheroes and upgrading the facilities so you can bring on more staff to take down more bad guys. Heroes need to train both their muscles and their brains, meaning a good mix of research, desk work, rest, and time in the gym will need to be reached. While some workers await promotions or snooze the afternoon away, the rest of your crew will head out into the streets to get the dirty work done.

Combat is where the decidedly non-mundane stuff happens, and not only do things get punched and special abilities get used, but performance reviews happen after every battle. Exciting! Scuffles are mostly automatic and require proper management of stats and abilities to win, rather than a masterful control of reflexes. If thugs outnumber heroes you might find yourself staring at a big fat failure report. After battles take place, it’s back to HQ to rest and train heroes until the next justice request form comes in. Which will be soon! 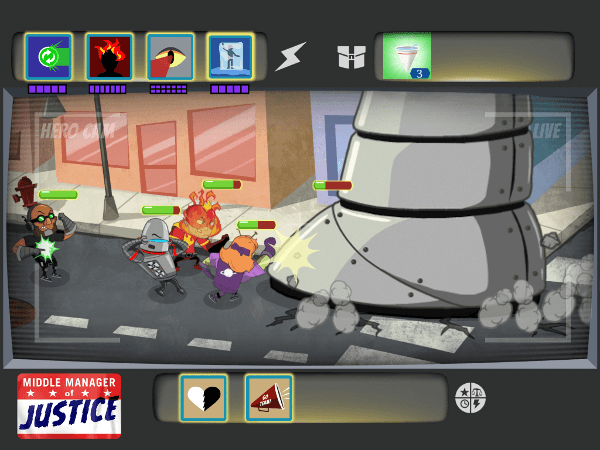 Middle Manager of Justice employs a light freemium model used to speed up in-game actions and purchase upgrades. Both coins and “superium” come into play, each of which can be bought for a modest price in the shop. Coins are used for expanding the office and providing more efficient facilities to train and house heroes. Superium is the “hurry up” currency that can turn a hero’s day-long training session into a few moments at the punching bag. The game moves at a good pace without dipping into micro-transactions, so the pressure is never too great to indulge. Just keep battling the bad guys and you’ll get along just fine.

With both absurdity and humor at its core, Middle Manager of Justice will easily work its way into a respectable position on your iOS device. The game itself is pretty standard for the genre, not taking too many chances by deviating from the established formula, but when it looks this good, is written this intelligently, and plays with such ease, you’ll have a hard time saying no. The lure of filling out status reports and managing superhero nap times is too great to resist!