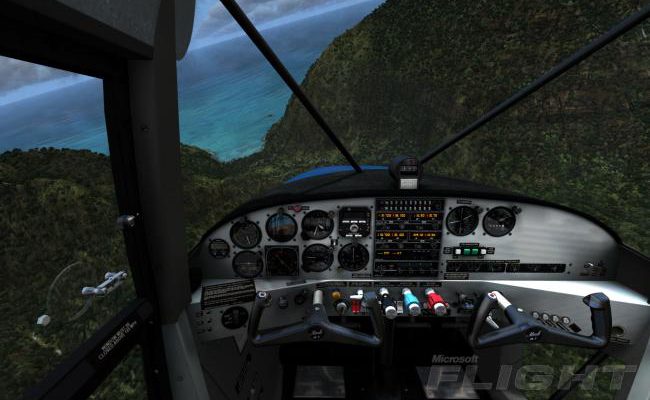 I’d be lying if I said I was well-versed in deep transportation simulation games. Up until to this point the only one I’d ever spent any significant time with is the Railworks Train Simulator series. The idea of a game trying to recreate to the best of its abilities what it’s actually like to drive a train or in this case fly a plane, is intense. It’s also a natural fit for games. Some of these games have the ability to give you a pretty decent impression on whether you might want to pursue “the real thing”. One of the long-time leaders in the sim world was the Microsoft Flight Simulator series, and it’s recently been reborn as the free-to-play Microsoft Flight, so let’s take a look at what it has to offer.

Microsoft has taken its long-running staple of the simulation genre, hit the reset button, and re-launched it as a free-to-play introduction into the world of flight simulation. Set in the middle of the Pacific Ocean, you’ll learn to fly an Icon A5 aircraft (based on the real-life light aircraft of the same name) around the island of Hawaii. Excellent tutorials teach you the basics of controlling your plane, and essential controls are introduced at a nice pace. Keyboard & mouse, gamepad, and flight stick are all supported to great effect, and you’re sure to find one that works best for you. Once the tutorials are finished you can choose different missions that will have you hopping all over the place, looking for lost kayakers or just taking some tourists sight-seeing.

The airplanes, as modeled in the game, look absolutely fantastic. The cockpits are extraordinarily detailed to get as close to the real things as possible. Just about every switch, dial, pedal and handle is interactive when you’re in cockpit view, to the point that you can even open up the hatch while in-flight! From a distance the landscape looks very nice, but get too close to some of the textures and they look very undetailed and dated. The sound is fairly sparse as you don’t hear much beyond the hum of the engine, but what is there is effective if nothing else. It’s worth noting there was a substantial amount of voice over work recorded for the missions, which is impressive for a free-to-play game. The title music sounds like the same piece you’ll hear while waiting in line for Soarin’ at Epcot in Disney World. 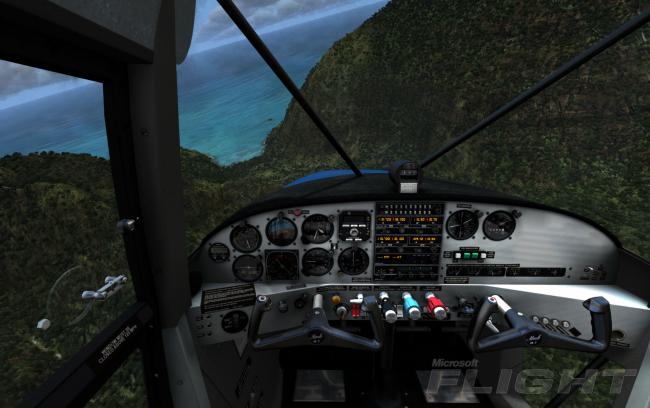 The missions themselves are fairly creative for a simulation game. That is to say they’re more than just a travel-from-A-to-B experience. Don’t expect to be doing loop-de-loops and dog fighting, and there’s plenty of flying in a straight line for 20 minutes if that’s what you’re into. Of course the monotony can be broken up by adjusting the various difficulty controls so that you can customize it to your skill level and preference. The amount you can adjust is one of the best features of the game, since it helps out “noobs” just getting into flight sims and caters to the people who are coming in from the Flight Simulator series.

Of course, since this is a free-to-play game, there has to be some things to buy. As mentioned before, the game takes place on Hawaii but the base version only makes the “big island” of Hawaii available. The rest of the islands and their missions can be bought in a Hawaii Adventure Pack for about $20. There are also two different planes available for separate purchase; one fully-modeled for about $15 and one that does not have its cockpit modeled for about half that. There’s nothing to unlock here – extra content is going to cost you unless you sign into your Games For Windows Live account where you’ll receive an extra plane, and one comes with the Hawaii Adventure Pack. I can mostly swallow the idea of paying $20 for the pack but $15 for a single plane is asking too much.

Microsoft Flight offers an excellent free-to-play experience, and it comes from an excellent and well-respected pedigree. It’s the simulation equivalent of something like StarCraft going free-to-play. There’s no question to the quality of craftsmanship that went into the making of this game in a lot of areas, especially where it counts. If you’ve ever been even slightly interested in checking out flight simulation you’d be a fool not to take to the skies with this free option.