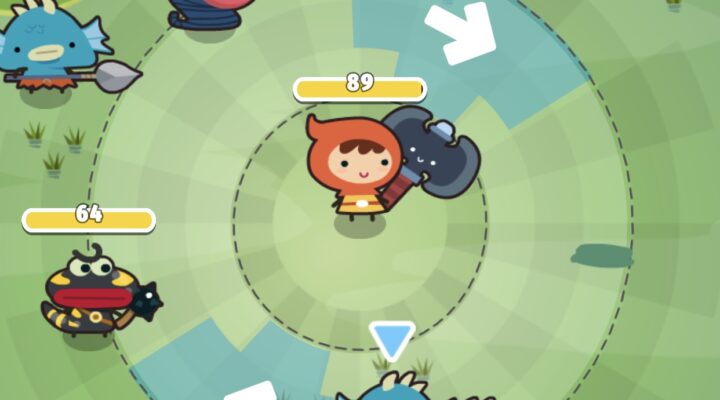 Micro RPG squished down the major components of action role playing games and delivers them in a quick-fire, spinny blast of midcore entertainment. It’s got some interesting ideas, and enough oomph to keep you playing when things get tricky.

You’re playing as a hapless hero, thrown into the fray after an invasion because the kingdom’s knights are all on vacation. You’re stood in the middle of the screen, surrounded by a bunch of angry looking monsters – ghosts, spiders, slobbering beasts, they’re all here.

The battles are turn-based and use a ring system. You’ve got three weapons – short, medium and long ranged, and when you select one it’s represented by a marker that spins around you. Tap the screen, it stops, and you’ll attack any of the enemies that were within the marker.

You can equip different weapons in the three slots, and they have different sized markers and special skills that can give you the edge in battle. Each level you’ve got a set number of specific monsters you need to take down – one group to complete the challenge, another to get some extra goodies if you manage it before your move count runs out.

Monsters that are going to attack you are marked with a red exclamation point above their heads. If you hit them with the right attack you can nudge them enough to make them miss. You can unlock different characters too, with their own unique skills – some of which will make a dodge more likely.

Micro RPG doesn’t mess around with its formula. You fight some monsters, get some rewards, upgrade or change your equipment and then move on to the next challenge. But it’s got a decent rhythm, its free-to-play mechanics aren’t too gougy, and dipping in and out is a good way to waste a bit of time now and then.