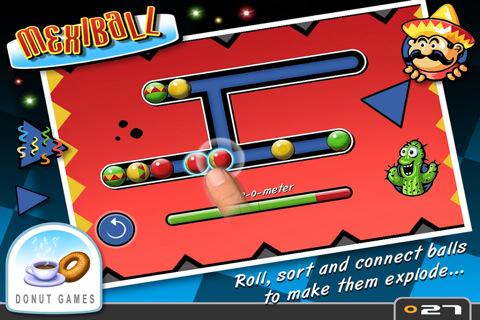 Imagine a combination of pool, Tetris and Taco Bell. Okay, so it’s not exactly the most natural of combinations, but Donut Games managed to figure it out and made Mexiball. It’s a unique puzzle game with a Mexican flair that manages to eke out something new and exciting for the iPhone and iPad.

All you have to do to finish each of the game’s 80 levels is match up all like-colored balls by rolling them along the pathways in each level. The fewer rolls you do the more points you earn, resulting in a higher rating. Simple, right?

Not really. Along the way, you’ll face a myriad of clever obstacles and gameplay changes. For example, some paths feature arrows that force the balls to roll in a single direction only. Other times you’ll have to change the color of the ball to match other balls, or to activate specific color-coded switches. Barriers, transporters and more also bar your progress.

Mexiball features a great in-game hint system that you can turn on or off as you wish. The system shows you a lightly flashing arrow of a good solution, but not necessarily the best one. Each level can be completed multiple ways, and even saves your best solution as a replay. You can also submit your scores to a worldwide online leaderboard, a very nice touch.

The best part about progressing in Mexiball is that there is no penalty if you deplete the move bar as long as you are able to complete the level. If you want to get a three-star rating, you’ll have to go back and try again. However, nothing is more infuriating than seeing most of the game locked away from you because you got stuck on level 12 out of 80. Kudos to Donut Games for ensuring that Mexiball is accessible to all players.

The gameplay in Mexiball gets deeper as you progress. Rodrigo the Amigo (the in-game character who helps you with hints and other encouragement, though he is sometimes replaced by other characters) gives you advanced gameplay tips the further in you go. One of the best is regarding multitouch in Mexiball. The move meter only decreases when you start moving a different ball, not how long it’s moved. As such, if you can use two fingers simultaneously to move two different balls around, you’ll be able to get a higher score since the move bar will only decrease for the single multitouch event, not the two balls moving. The system is startlingly deep, and with the best replay and leaderboard options, gives a lot of replay value to the puzzles. The Game Center achievements don’t hurt either. 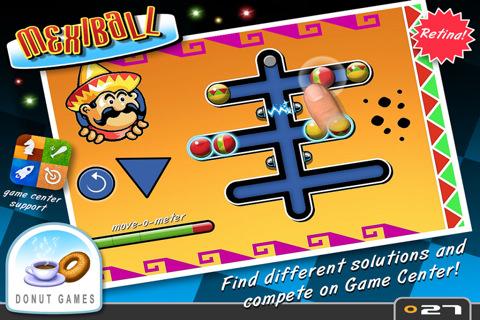 The physics in Mexiball add to the challenge. Balls have to be moved carefully and precisely. If you’re in a hurry, balls will ricochet off walls or other balls, forcing a new move and a lower score. On the iPad, it’s not too tough to deal with thanks to the larger screen. On the iPhone, you might find a few of the finer-detailed puzzles a bit tougher thanks to this.

Mexiball naturally features a Mexican theme. The graphics and sounds are all bright primary colors, with Mexican brass audio cues throughout. There’s nothing inherently wrong with any of this. The Mexican theme doesn’t really add anything to the game, either in character or gameplay. This could have been called “Uncle Bob’s Ball Clearing Bonanza” and it still would have been fun, but why the designers went in this direction is unclear.

The only big knock against Mexiball is how unclear the tutorial are. Granted, the reveals of higher technique in later levels are likely to ensure that players go back to earlier levels and try for a better score, but the basics aren’t terribly clear. The biggest is the lack of proper explanation of the move bar. I was under the assumption that it decreased the longer you held a ball to roll it. As such, I was trying to complete puzzles using gentle flicks. It wasn’t until about level 15 that the true nature became clear, and I was able to go back and score much higher on earlier levels. It’s unfortunate that this basic, fundamental part of the game was unclear from the get-go. Hopefully this won’t turn off too many players.

If you’re looking for a fun, spicy puzzler with some serious kick, head to the App Store for Mexiball. The gameplay is simple but deep, with loads of replay value and variety. It’s worth the trip south of the border.