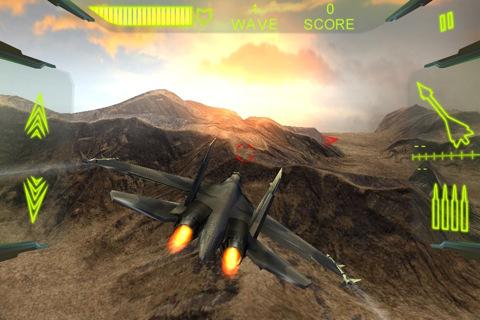 The iPhone is one of those gadgets that has a ton of bullet points: great graphical and sound abilities, gyroscope, touch screen, always online and so forth. Most games in the App Store take advantage of some of these features, but rarely does a game nail just about every single aspect of the system in a single shot. MetalStorm: Online manages to do this, and it happens to also be one heck of a lot of fun to play too.

Essentially a social version of Top Gun, MetalStorm: Online lets you build and customize your own supersonic fighter jet. By playing different modes, you earn experience as well as credits and coins (the game’s premium currency). The better you perform, the more planes, weapons and options open up to you.

You’ll start with a basic plane, standard Vulcan cannon and sidewinder missiles. After a few fights you’ll get better, more maneuverable jets and more advanced firepower. Each aspect of your plane has a clear rating. For example, do you prefer your plane have a higher top speed or more maneuverability? Do you want your weapons to have a greater range, or be able to fire more rounds per second? These kind of balancing, strategic issues give MetalStorm: Online a surprising amount of depth – to say nothing of the vast array of options and combinations available.

It’s all very intuitive. A fully-voiced tutorial shows you the ropes, and MetalStorm: Online keeps things simple enough that it’s easy to pick up and play. Weapons are fired using touch screen buttons on the right side of the screen, while afterburners and airbrakes are controlled on the left. But the real joy is the tilt controls. Even on a 3GS, MetalStorm: Online controlled like a dream. Turning was smooth, responsive and accurate. The plane never felt wonky or out of control. It just went where we wanted it to. The game is apparently optimized for the new motion-sensing capabilities of the iPhone 4, so it can only get better from what we were able to experience.

In this same vein, the graphics and sound are stupendous, the best on the system since Rage and Infinity Blade. The vistas are gorgeous, with mountains, lakes and beautiful skies aplenty. Again, the graphics are also optimized for Retina displays, which means it can only get better than what we could experience using a 3GS for review. The audio is equally spot on, with a great cinematic orchestral soundtrack that punctuates the action. The guns, missiles, explosions and roars of the engine all bring MetalStorm: Online to new heights.

The second part of the name – the online part – works great regardless of your connection. Using both 3G and WiFi, we were able to join a random game within seconds with no noticeable lag whatsoever. There always seemed to be an opponent or cohort available. Utilizing the best of Game Center, you can easily find your friend and play with them, or add new ones if you had a particularly rousing game with a stranger. All your achievements and other accomplishments can be published via Facebook or Twitter if you wish. 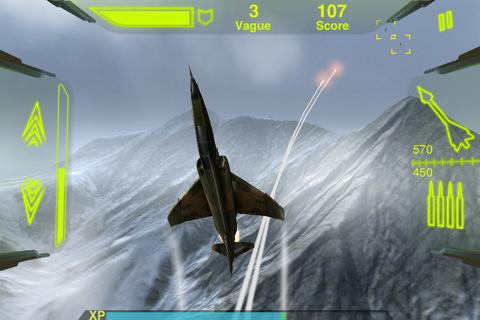 The two game modes in MetalStorm: Online – a one-on-one dogfight or a co-op mode facing waves of enemy planes – will keep you busy. Even if you don’t have anyone to play with online, there’s still a lot of fun to be had. As your skills and your plane improve, you’ll be able to go deeper and deeper into the waves of enemies. At the later waves, the computer drones are actually quite clever and resilient.

The knocks against MetalStorm: Online are few and slight. There isn’t much variety in terms of the environments you get to play in. And while it’s nice to be able to play with a friend, some of the best online experiences are group ones. Imagine a true squad-based dogfight with eight people participating. Perhaps it’s a limitation of the system or the online servers, but the lack of multiplayer to this extent felt missing.

But don’t let any of these negatives – one of which is more of a wish than a real complaint – stop you from downloading MetalStorm: Online right now. It’s the best flight sim/online action game on the iPhone, and one of the best games on the platform full stop. It’s a great feat of iOS programming, and a showcase of how to do an iOS game right. Watch for this one in a few top ten lists at the end of the year. A must have by any standard.