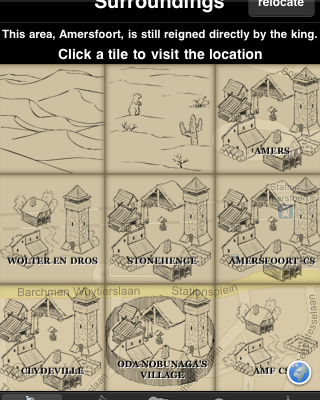 My Kingdom is like every other free-to-play MMORPG, except not fun.

Chillingo is a newcomer to the world of free-to-play MMORPGs on the iPhone, and it totally shows with My Kingdom. The game seeks to combine an online role-playing experience with city management and the iPhone’s GPS capabilities. Technically, it works fine but the My Kingdom’s creators seemed to forget to include the necessary attributes for success: making the game both fun and addictive.

You begin the game as a merchant, establishing settlements on an Old World version of the satellite maps for the real world location you happen to be visiting. Each settlement can be filled with buildings that harvest items like food, clay, wood, and tin. The basic materials can be combined to make more advanced types, or you can simply trade them at the local market for your geographic area. After you’ve established multiple settlements, you can even use your trade caravan to move materials between areas you control.

However, until you’re able to transport goods back and forth with your caravan, you can only collect your settlements’ stocks when you physically visit the real world areas that correspond to your village locations. Needless to say, this is a pain – especially if one you want to transport goods from one settlement to another in order to order a building upgrade. 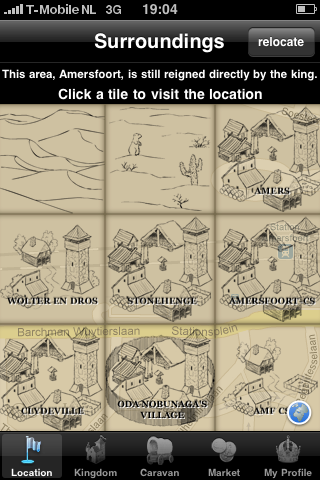 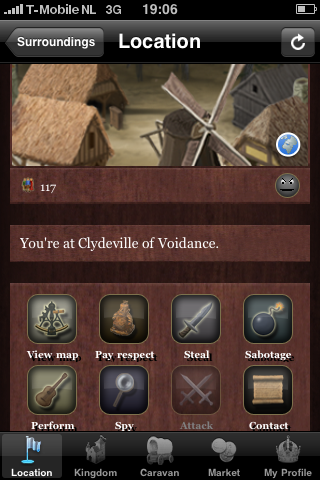 Once you’ve completed the initial quests from the tutorial, you’re given a choice to join one of four guilds: Traders, Explorers, Thieves, or Manufacturers. After that you have to build up enough experience points to get yourself knighted, whereupon the game gives you the option to further your empire through either diplomacy or conquest (a nice touch is that you build a castle and then demand other players pledge their allegiance to you).

At any given time, your map is divided up into a nine square grid. One of my main problems with the game is that you can’t have any settlements touching a grid square occupied by another of your settlements, though being next to another player’s settlement isn’t a problem. For a GPS-based game, this may not sound like a big deal, but it’s mildly irksome when you live on a college campus and tend to spend most of your week within the same square mile.

No matter how you play the game, you’ll eventually need to buy units like carriers, thieves, dragomen, minstrels, and spies. There are two ways to do this: pay with in-game gold or real-world cash. Unfortunately, paying via in-game gold is only an option with a small number of these units unless you buy the “Pro” version of the game for $3.99.

The production values are decent enough, featuring various hand-painted illustrations for the different buildings and environments. Not only that, but the stylized map looks pretty cool, too. However, there’s no music to listen to and there doesn’t seem to be an option to listen to tunes from your own collection, either.

While these various issues may sound like enough to steer you away from the game, there’s actually bigger problem with My Kingdom: it really isn’t all that fun. It’s slow-paced, kind of dull, and not something you’ll want to play if you don’t travel all that much.