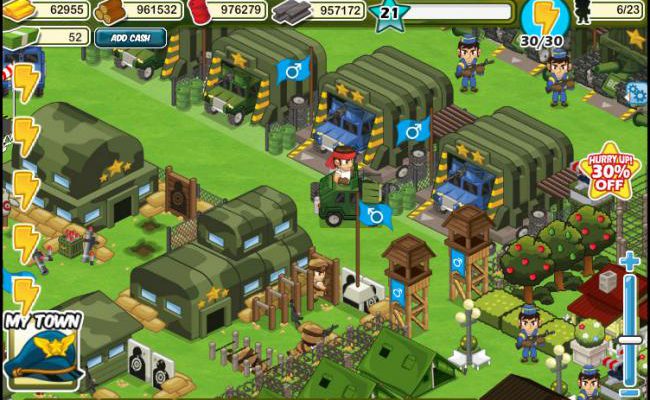 The battle of the sexes has been a war going on since time began, and developer Social Point is re-imagining it. Men vs Women pits the two sides against one another in a new global conflict with one side trying to topple the tyranny of the other in a social strategy style akin to that of Social Empires. That in mind, the game basically is a remake of the Social Point predecessor, only moving out of the medieval ages and into the modern era.

Depending on which gender you pick at the start Men vs Women will pit your army against a villainized version of the opposite. Part of the emerging core-style of social games, the new application is, for all intents and purposes, a real-time strategy game that tasks you with managing various resources and constructing a viable army of men or women. 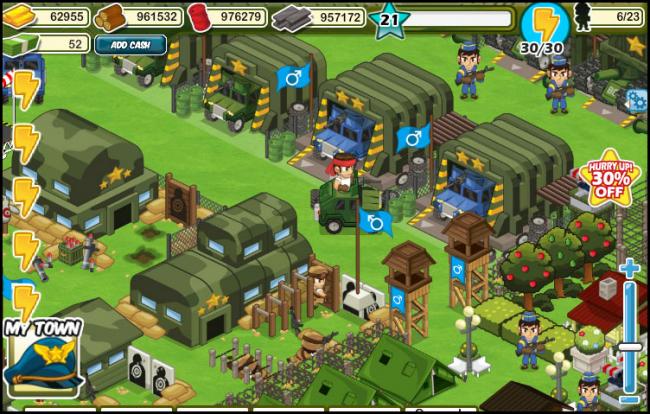 If you’ve played Social Empires at all, you’ll have no problem with this newer title. The management system is about the same, with only the types of resources changing. As it is set in the modern era, these consist of gold, lumber, oil, and steel. Like the predecessor, the game space is peppered with nodes that workers can go out and harvest for immediate return, but it is far easier to construct various factories that produce resources passively. In order to do so, the factory must be manned by a worker unit (created at your primary command center building) and production for a set amount of time must be set. The longer the production time, the greater the resource yield.

Workers, and units in general, play into the game’s unit cap, dubbed population, which is typical of the RTS style of game play. As you expand your army you will have to continually build houses in order to support them all, and the more powerful the unit, the more population it uses. As you play you’ll gain experience and level up, unlocking new and more powerful structures from which to build better units.

This in and of itself is rewarding as some of the units are pretty gratifying to earn and range from basic jeeps to tanks and stealth fighters. What is even more fun (or at least as fun as it was in Social Empires) is that once an army is constructed, you can go around the world dominating everything. 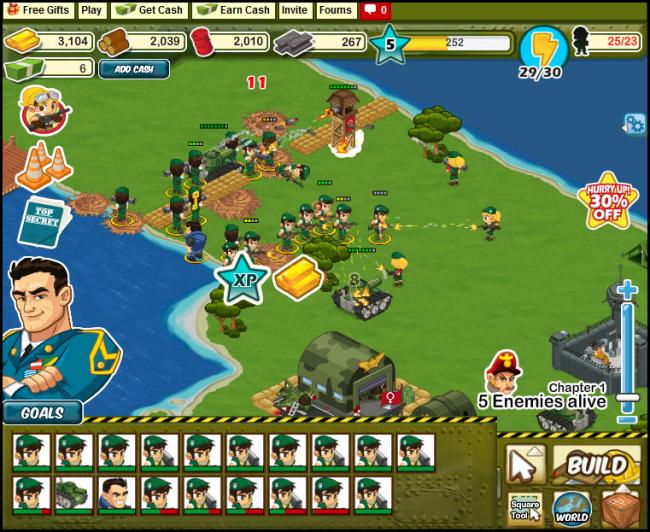 On the most basic level, the “evil” opposite gender empire will “attack” your base by setting up shop relatively close by. Within its confines is some sort of reward (e.g. extra or special units), and killing all enemy units will grant it. That said, this only occurs every couple of hours, so for a little extra destruction, you can set out to sea and enter into quests. These are not to be confused with “quests” such as “gather X amount of something,” but rather they are somewhat story-driven missions where you must defeat something or someone within a heavily fortified area, using whatever battle units you have in your army.

This concept is similarly emulated in some of the social features too. Like Social Empires, you can take your legion out into the world and asynchronously attack other random player bases for some extra rewards. That said, they can attack your base too, so it pays to keep it heavily fortified. As for allies, they can be visited and their bases “helped,” on a daily basis, for extra experience and coin. Other social standards are also incorporated, including gifting and making the occasional wall posting for them to claim units or resources you find around your game map.

Men vs Women certainly is a bit of an odd concept, but the game is pretty fun. That said, if you’re looking for a new game, it’s not really going to be found here, but Men vs Women does provide a nice change in aesthetic allowing you to play an already quality game in one of two very different styles.