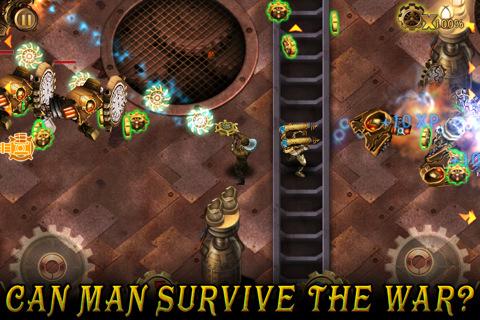 I have been and always will be a fan of the twin stick shooter. Be it an old example like Robotron 2084 or Smash T.V. or something very recent like Gun Bros. I’ve always just had an affinity for them. There’s something to the idea of being able to move and shoot in different directions, and when done well is fantastic for letting you slip in “the zone” letting you bob and weave around baddies while blowing them apart. Men Vs. Machines is a great example of this, but feels a little too familiar.

Let’s start with the good stuff. Men Vs. Machines is another one of Glu’s “freemium” games, which means we get the game for free then they try to entice us to fork over real cash in-game to buy and unlock stuff. Freemium games at their worst feel like glorified demos, and at their best present themselves like Men Vs. Machines does. It’s enough game that you don’t feel like they’re teasing you, really giving you most of it for free and allowing you to minimize the grind by paying in.

The controls in a twin stick shooter really make or break the affair, and I’m happy to report the controls here are excellent. Glu’s been down this road before with Gun Bros. and really goes with the “if it ain’t broke, don’t fix it” philosophy. You’re not limited in any way in degrees of movement, giving you precise control in both sticks. Circling and firing enemies is easy when the controls are this good.

Since the game is free and companies are in the business of making money, Men Vs. Machines relies on in-app purchases to acquire some of your hard earned cash. You can spend your real world dollars on gun and armor upgrades to really kick some steampunk butt. You can also grind it out to earn enough of the in-game cash to buy the weapons, but they really lean on you to pony up real bucks.

You’ve seen me mention Gun Bros. a decent amount in this review, which was an excellent twin stick shooter from the same company, Glu, that came out a few months ago. I’d like to be able to sit here and say if you liked that game you should definitely run out and pick this up, but I don’t think that’s the case. Why not, you ask? Well, Men Vs. Machines is the exact same title, just with a reskin. The game plays the same, the menu looks the same, the items unlock the same way. Everything is the same, except for the look. The one significant difference between Gun Bros. and Men Vs. Machines is the new steampunk visual overhaul.

If you’ve already downloaded and enjoyed Gun Bros. then you might as well pass this by, there’s nothing new here to keep you interested. So while Men vs. Machines is a really good game, I just feel the need to steer big fans of Gun Bros. away unless you want to start all over and re-level, or pay into a game that’s exactly the same as the one you just walked away from. As a freemium title there’s no dishonor is re-skinning and re-releasing to be sure, but it’s still worth nothing and if you were a big Gun Bros. fan like I was, then that’s really the lasting impression you’ll likely be left with.