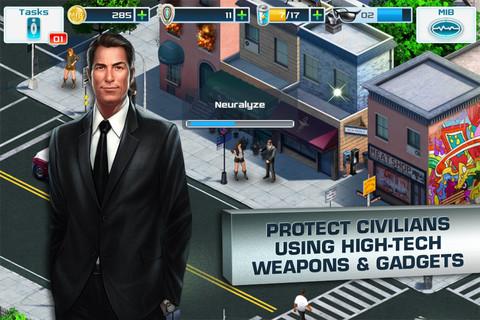 In a victory for tie-ins, Gameloft’s Men in Black 3 might be more fun that the movie

You have to hand it to Gameloft–they could have produced yet another uninspired movie tie-in, but with Men in Black 3, they delivered an amazing experience in resource management and turn-based combat. In fact, based on early reports, you’ll probably get more enjoyment out of it than the movie itself, and that’s something that few tie-ins can claim.

Men in Black 3 kicks off with the usual “rookie” scenario found in so many of types of these games, but eventually the powers that be let you expand the MiB offices, develop fancy new alien-blasting weapons, and try to save the world in both 1969 and 2012. Even Agent J didn’t advance this quickly. As you become more adept at ensuring the survival of our little rock with the help of Agent J and Agent D, you’ll amass a trove of materials that you can use to expand your base, improve your weapons, or patch up wounded agents.

The combat in the time-hopping missions is turn-based, which essentially means that you’ll have to tap out attacks over and over, after which you wait for your alien foes to fire back. It’s not the most satisfying shooter gameplay ever made, but it works well when you consider that multiple agents are firing and you get to upgrade your attack power as you level. Most enemies also hit rather hard, too, so there’s even an element of tension involved each time you go into battle.

Since it’s a free-to-play game, Gameloft naturally worked in a few ways to make it pay for itself, but these aren’t as intrusive as they could have been. Microtransactions mainly serve to speed up the game’s many lengthy crafting and deployment missions by using the Temporal Pulse, and you can pick up 20 more besides the 12 free ones for only $2.00.

Since there’s a lot of replay value here, you might find yourself willing to toss Gameloft such a small amount even if you don’t normally subscribe to such payment plans. Missions are generally fun, and their only real low point is the inability to zoom in on anything.

All of this is fun itself, but one of the best things about Men in Black 3 is that it doesn’t take up much room on your phone. That’s partly because they opted to keep out voice files of the beloved characters from the movies that pop up in almost every screen, but it also ensures that you won’t be as tempted to delete it later once the initial appeal wears off. 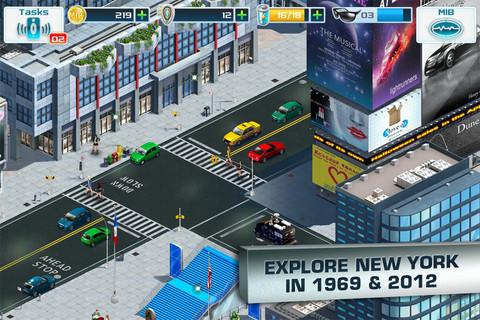 Couple that aspect with the game’s gorgeous visuals, catchy retro game music, and engaging story, and it’s clear that Gameloft has produced a rare spinoff that might outlast the movie’s theatrical run. Even if you’re inclined to wait for the film’s release on DVD, you should pick up the fun little free app today.