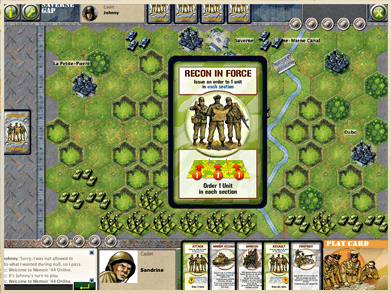 Memoir ’44 Online is the digital version of the super popular two-player board game from Days of Wonder. Between Ticket to Ride and Small World on the iPad to this latest title, Days of Wonder has made a serious push into the video space and I for one couldn’t be happier. Unlike those other titles, though, Memoir ’44 Online is a free download and while it won’t play on your iPad it will play on your PC, Mac or Linux machine.

The game looks and feels exactly like the real-world board game. The map is divided up into hexes and the terrain is tailored to the specific battle you’ll be fighting. For instance, if it’s a beach invasion you’ll have water and sand on one end of the map. You’ll move units around and battle with each other using dice rolls depending on the types of units doing the fighting.

Memoir ’44 Online is a scenario-driven game where at the beginning of each match you’ll chose from different locations and set-ups, based on real events but not picture perfect, more of an approximation to keep things balanced. Each scenario has different win conditions, and seem to usually center around grabbing a certain number of medals which can be earned by wiping out enemy units or capturing strategic points on the map tied to the scenario.

Each unit has a movement and a firing range that you need to always be aware of so you know when you’re getting yourself into dangerous territory. When you’re moving units, the game will color in hexes in two shades of green, the darker shade means you can move there and still attack this turn, while the lighter shade you can move there but not attack. For firing you can highlight a unit and hold shift and it will show you how far you can fire and how many dice you’ll use when you do. Yellow is 1 die, Orange is 2 die and Red is 3 or more, depending on the unit.

You’ll play out the scenario as the army of your choice, and the game doesn’t end until someone meets the medal requirement or loses their entire army. After that your record will be updated and you’ll go back to the lobby to load up another game if you wish. Most scenarios take about 20-30 minutes. It’s well implemented and easy to understand, with a hints and tutorial system built right in. The game goes to great lengths to make sure you understand what is happening at all times.

The game itself is “mostly” free. You’ll start by creating an account on the Days of Wonder website, then you can download the game for the platform of your choice. Once installed you can jump right in and start battling either the AI or other players. All free. It would seem the monetary part will only come in once you’ve played many hours of the game actually.

There’s an in-game currency called Gold Ingots. When you make an account you start with 50. Each map you play costs between 1-3 ingots to play mostly. With each game taking 20-30 minutes this is actually a good amount of time to get your feet wet and try the game out. If you want to continue after that you need to purchase some more ingots.

You can buy them in $8 (200 ingots), $30 (1,000 and the ability to make your own scenarios) or $60 dollar increments, with the top tier actually getting you a $30 credit in the Days of Wonder store to buy the real world board game, in addition to 2,400 gold ingots. Remember each game costs you between 1-3 ingots so really even the $8 cost goes a long way except for the more fervent Memoir ’44 fan. The prices really are pretty fair and give you a great amount of playing time for the money, not to mention you get 50 for free to start with, good for dozens of games.

Memoir ’44 Online is a great example of a board game company taking great care when bringing their products into the digital space. It’s significantly cheaper than the analog version, so you can dip a toe in and try it out without a big investment. Or if you love the game but have a hard time finding opponents this gives you a chance to scratch that itch.