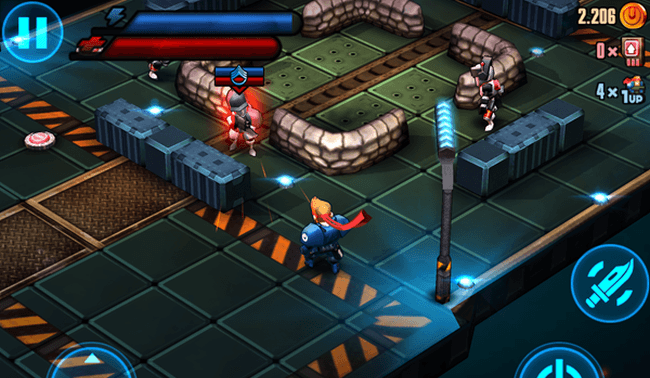 A tale of two experiences

Meltdown is one of the most unique experiences I’ve had playing a mobile game. Like a confused college student, it has a few ideas on what it wants to be, but it gets lost in its own search for an identity. On paper, that identity is easily understandable. In practice, there are two experiences that are nearly identical. The single difference between the two is enough to shake the game’s foundation.

Upon first glance, it’ll seem like Meltdown is a lot like Bastion, which is a fair assumption. The birds-eye camera view and the 360-degree motion result in this game controlling much like Supergiant’s indie hit. Your character carries two guns and a melee weapon. Each gun can be purchased and upgraded by spending coins and upgrade cards dropped by enemies.

Customization is one of Meltdown‘s strong points. Projectile weapons and your character all have individual skill trees. When a gun has been upgraded nine times—it’s maximum—a new one will appear in the shop. Your character’s skill tree is similar, but lacks the hard limit. You can choose to obtain skill boosts in damage, health, and weaponry. You can ultimately fill it out completely, so there’s not much risk in selecting the wrong path. Regardless of skills and which two weapons you equip, you’ll play the game the same way, only ammo types and meter regeneration changes.

Meltdown‘s level-based gameplay is the bulk of what the game offers. The default controls are annoying, at best. I found myself trying to adapt to the touch-heavy controls, only to become frustrated and quickly go digging in the options menu. Fortunately, there’s an excellent control scheme that mimics a game pad. This setup lets you move with a virtual thumb stick and press virtual buttons for shooting, dashing, and using a melee strike. There’s also controller support for those with a compatible pad.

Meltdown currently comes with thirty levels. The primary goal of each stage is to reach the end. While managing health, armor, and ammo, you’ll also run into a ton of different enemies and special objectives. Certain levels are marked with these objectives on the select screen. Sometimes you’ll have a boss battle, or maybe you’ll face multiple waves of foes. No matter the task, the game is not fun when you play alone.

There’s a multiplayer option in Meltdown and it completely shifts the way you approach the game. When playing, you can either start your own level or join another player part-way through. When playing alone, I found myself hanging back, shooting from afar, and spending a lot of time in cover. It’s easy to get stunned by an explosion and quickly killed by a pack of enemies. If you die, you can choose to restart the level or use an instant respawn token, which is rare to find. Wanting to save my tokens for boss battles, I started to play cautiously. 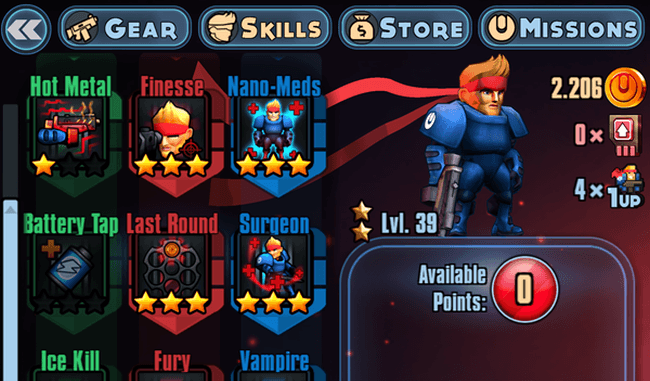 Then someone joined my game. Neither the fundamentals nor difficulty change with multiple players. This makes the game easier, but much more fun. Instead of avoiding death, my buddies and I began bringing it to everyone who opposed us. If we died, we could respawn with a token, call it quits, or wait fifteen seconds and just lose a few rewards. We all gained a ton of more money from our fast-paced chaos, and we began leveling up quickly.

I quickly realized that playing Meltdown alone is miserable. I tossed around the Bastion comparison a few times, but the key difference is that Bastion is fun. With teammates, Meltdown manages to come close to that level of excitement and intensity. Alone, it becomes formulaic and boring. Single player action is little more than a third-person cover shooter, like Gears of War. Multiplayer is one of the most enjoyable experiences I’ve had with a mobile title this year. Because of this, it’s tough to recommend Meltdown to anyone who won’t take it online. If you have people to play with, it’s well worth the price of admission.