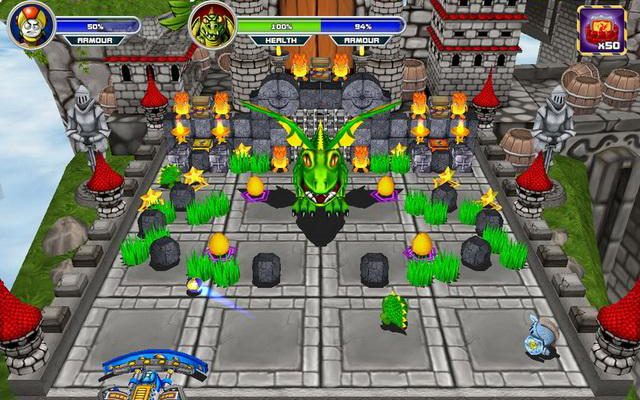 Mega World Smash is a brick-breaking game that takes place in the light-hearted, somewhat tropical setting of an amusement park. With a bright and cheery atmosphere, it’s an attempt to add some cheer to what has otherwise been a traditionally bland genre, visually speaking. The graphics, combined with a loose story and three-dimensional levels, help Mega World Smash stand out a little. If only it were a bit more challenging. 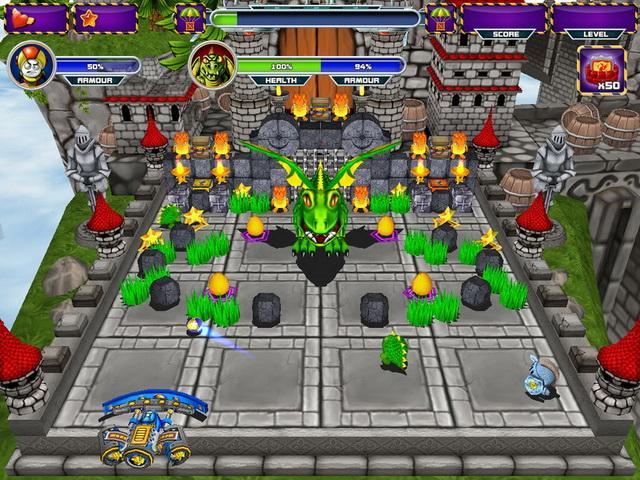 Maybe I’m being a bit unfair. Mega World Smash doesn’t necessarily feel original, but it does do its best to stand out from the other games of its genre. One of the most noticeable differences is how the blocks are arranged in three-dimensional structures. Because the ball is always rolling on the ground, you can only hit the ground-level blocks. This enables gravity to take control in something I can only describe as Breakout meets Angry Birds (without the cute, slightly deformed birds, of course.)

As fun as it is to watch this structures collapse, the third dimension isn’t the only tweak developer makes to the brick-breaking formula. Similar to other titles, there are power-ups and power-downs…lots of them. These features are what leads to the vast amount of collateral damage during any one of the game’s 100 levels. The power-ups range from traditional items like guns and extended paddle to crazy attacks like air strikes, buzzsaws and homing missiles. The power-downs have just as many different levels of sanity. While the old favorites like small paddle and speed-up remain intact, new horrors (like “crazy ball”) make some appearances and do their best in trying to keep things fresh.

Sadly, these changes alone don’t add much to make the game feel fresh for very long. After the first dozen stages, the levels start to feel somewhat stale and repetitive. The challenge is lacking as well, as extra lives are plentiful, and the ball moves quite slow. The developer has a few other tricks they try to use to keep you playing the game. The first of these is a story. Sadly, the story is really only told through occasional character dialogue and little scenes before boss battles. I credit them for trying, but a story in a brick-breaking game is like a cherry on top of your sundae: It doesn’t matter how good or bad it is, it’s not why you’re buying it in the first place. 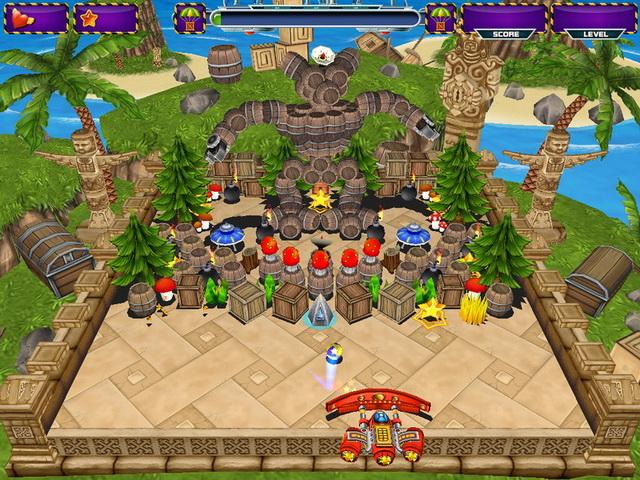 The other unique quirk is the skill tree, which attempts to give Mega World Smash something of an RPG feel. As you play through levels, you’ll collect stars. The stars are used to upgrade the effectiveness and duration of power-ups and abilities, and downgrade the power-downs. Each character has his or her own specialty and that allows greater benefit in one of the parts of the tree. Like the rest of the game, the skill tree is a nice addition to the genre, but it hardly changes the core gameplay, and the game is easy enough where it can be played without touching the tree.

Where Mega World Smash reaches its maximum level of fun is during the boss battles. There are only five stages of the game dedicated to bosses, but they’re unique creatures that add flavor and challenge to the experience. The bosses are amusing beings who include a giant enemy crab and a large pumpkin robot who speaks like Yoda. The bulk of the game is quite easy, but the bosses add a much-needed challenge. The average boss will spawn new enemies, roll mines at you, give you a random power-down, and attack you with its own projectile. A boss battle is an easy way to lose a few of your many, many lives. I’m very disappointed that there are only five bosses in the game, as they’re easily the best part of the experience.

Mega World Smash is just about what you’d expect from a brick-breaking game. There’s more destruction and it’s certainly prettier than games like Breakout and Arkanoid. But the only challenging levels are the boss battles, and even those aren’t much of an issue. If you’ve always felt like brick-breakers needed a bit more destruction and chaos, you’re in luck. If not, you’re just going to find the typical brick-breaker re-skinned into a 3D world.