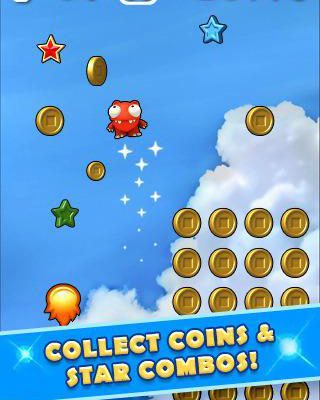 Don’t let its charming characters and colorful backdrops fool you: Mega Jump isn’t for the feint of heart. Despite the cute and cuddly veneer, this is a difficult game that will challenge even the most skilled of players. But even though at times Mega Jump will have you cursing up a storm, it’s so finely crafted that you’ll want to keep playing in spite of the frustration. This is a game that will make you smile as much as it’ll make you swear.

As you can probably guess from the title, Mega Jump is all about flying through the air. As the little red critter Redford, it’s your job to get as high as possible…and then keep going. Your fuel consists of coins, which you’ll need to collect in order to stay airborne. If you fall downwards too far, it’s game over. The concept is simple and not entirely unique, but it’s the execution that makes Mega Jump such a gem. 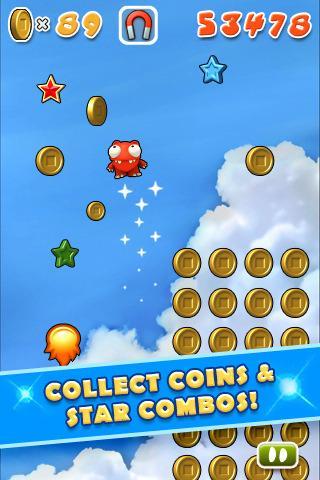 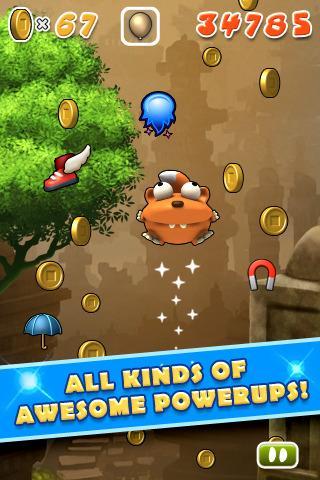 You control the game solely via tilt controls, moving your phone back and forth in order to guide Redford through the air. The coins are spread out through each stage in different ways. In some areas they’re bountiful, giving you a super huge boost, while in other sections they’re much more scarce. And it’s in these areas that the game requires some real skill. Bouncing back and forth between coins is no easy task, and just one small miss can leave the little red guy falling to his doom. Thankfully the controls feel solid, and when you do fall, it really feels like it was your fault and not due to the controls.

To keep things interesting the game features a number of different power-ups. Some will blow Redford up like a balloon, causing him to float for a short period of time, while others will temporarily turn him into a rocket blasting to the top of the screen at high speeds. All of them are very useful, though, and add a unique dynamic to the game. Mega Jump also features quite a bit of unlockable content, including additional characters and power-ups. There’s also a total of 10 different stages to complete, though for many players getting past the first stage will be challenge enough.

When you combine the incredibly challenging yet incredibly addictive gameplay of Mega Jump with its insanely cute visual style, you have a game that’s a perfect fit for the iPhone. Great whether played in short bursts or prolonged sessions, Mega Jump somehow manages to both frustrate and delight at the same time. It’s a long road to the top, but it’s a trip well worth taking.