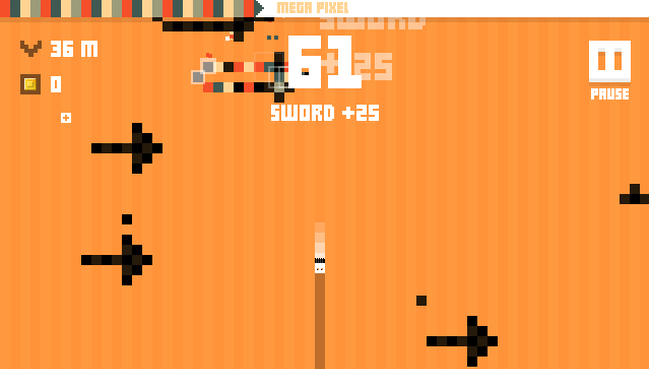 Put those dead pixels to good use, Mega style

We’ve done endless runners, and endless jumpers, and endless shooters, and all sorts of other endless objectives in video games. How about a little bit of endless falling? Mega Dead Pixel tasks you with dropping off a computer monitor, and dodging around the various pixel shapes for as long as possible, pulling off tight maneuvers and collecting other dead pixels that have lost their way in this crazy world.

There’s something suspiciously compelling about Mega Dead Pixel. While the idea of falling around various pixelated shapes might not sound like such a heavenly idea, I found myself unable to pull away from it for hours. I just had to unlock that next pixelwall, and buy those new shapes, and beat those new missions, and enter that new world, and…

That’s essentially the entire pull of Mega Dead Pixel in a nutshell – there’s just so much to unlock and play around with in this game. But it’s also the playful twist on the regular endless runner genre that keeps the game fresh. See, you don’t get points for getting as far as possible in this game; rather, it’s all about pulling off near-misses and smashing through anything smaller than yourself.

If you brush past any object as you fall, you’ll gain points. Brush enough pixels and you’ll turn into Mega Pixel and begin smashing through the level. Each time you smash into another shape, you’ll gain some points and get slightly smaller. If you’re the smallest you can get and you hit something, it’s game over.

Hence, Mega Dead Pixel is all about brushing, building up your Mega bar, turning Hulk-like, smashing everyone who gets in your way, rinsing and repeating. It’s a fairly unique idea, and one that lends itself very well to the endless runner genre, especially when coupled with Jetpack Joyride-style missions that ask you to brush a certain type of shape multiple times, smash through 10 shapes in one go, and other such pleasantries.

This is where all the added content comes in. As you play and beat missions, you’ll level up and unlock new pixel shapes to fill the levels with, and new hats to plonk on your head. Hats grant you special stats and abilities, while pixel shapes can completely change the flow of the game depending on whether you select good combinations or not.

Then there’s pixelwalls to bash down, bonuses to purchase with coins, different worlds and soundtracks to unlock, online leaderboards to top, Game Center achievements to add to your belt… you’re getting a lot of silly yet compelling content for your buck here, and you won’t hear me complaining about it. It really goes to show how adding all of these seemingly optional extras to a simple content can massively expand its horizons.

The aforementioned collecting of coins is a bit of a bother. As with many of the similar games in its genre, Mega Dead Pixel asks you to grab coins during your falls and use them to purchase everything in the shop. Unfortunately the game is very harsh with how many coins it offers you during your falls, and you’ll need to play for ages just to unlock simple levels and items. Of course, you can pay real money to get coins instantly – but for those players who don’t want to spend a dime, you’re going to have to do a fair amount of grinding. 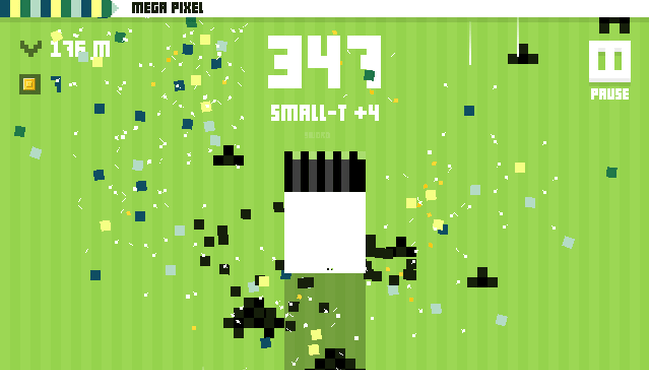 But there’s an even weirder problem with Mega Dead Pixel. After I’d finished playing, I went to use my computer… and suddenly discovered that everything I was looking at felt like it was moving downwards. The game warns on the title screen that it can cause motion sickness, and I can’t even remember such a thing affecting me – yet here I am trying to write this review, and all the words slowly but surely melting and rotating out of my view. It’s an extremely odd feeling, and it’s worth taking note just in case this sort of thing has a tendency to get in your head.

Mega Dead Pixel is a formidable endless whatsit, and given its invisible entry fee, it’s well worth giving a download. Just don’t blame me when you start seeing falling pixels all over the place in your day-to-day life.