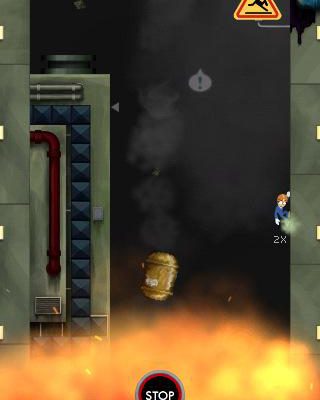 If Ninjump was study time, Mechanic Panic is the final exam.

There was a time, right around the middle of 2010, where you couldn’t even sneeze without a new survival game falling out. Since then the survival genre has slowed to something of a more reasonable pace, with a lot of six month late “me too” releases broken up by the occasional hidden gem. Mechanic Panic definitely falls into the latter.

Preferring the vertical survival route of games like Ninjump and Ninjatown: Trees of Doom over the horizontal chicanery of games like Canabalt, Mechanic Panic has players assuming the role of a repairman on the world’s first space elevator. Something has gone terribly wrong, and it’s up to you to save as many of the elevator’s falling passengers as you can while avoiding obstacles and outrunning the never-ending explosion below.

Like most games in the genre, controls here offer a deceptively simple one-touch mechanic. Tapping anywhere on the screen will cause the mechanic to jump from one side of the elevator shaft to the other. The faster you tap, the higher your score multiplier grows. But while controlling the jumping is simple, knowing when to jump is what separates the mechanics from …less experienced mechanics. 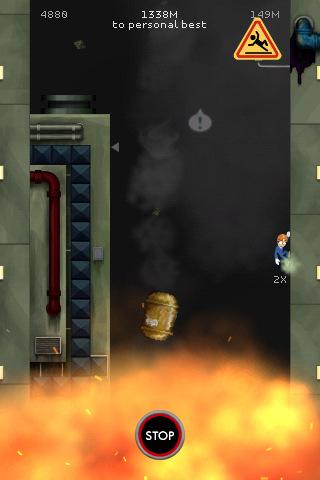 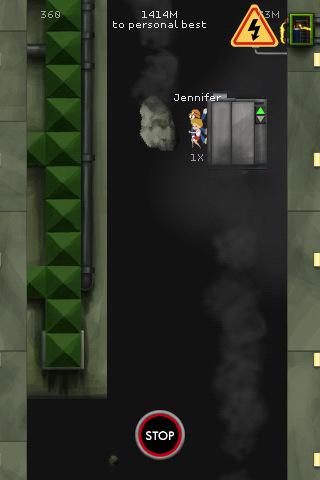 With a never-ending flame climbing below and an endless barrage of obstacles falling from above, timing becomes everything. Go too slow and you’ll suffer a hot fiery death. Move too recklessly and you’ll get smooshed by an elevator or a piece of scrap metal. And did we mention that you’ll also be timing your jumps to catch falling passengers and fellow engineers? And that there are a variety of obstacles built into the walls too? Mechanic Panic takes all of the skills you’ve learned in previous vertical survival games and puts them to the test. If Ninjump was study time, Mechanic Panic is the final exam.

In addition to the deeply satisfying challenge, Mechanic Panic has a few really cool little touches that help to make it stand out in the crowd. Those wall obstacles I mentioned? Some of them do things like turn out the lights, forcing you to play in the dark. Others are circuit breakers that let you turn the lights back on. There are even elevators rocketing to the top, which, if you time it right, you can hitch a ride on the side of so long as you jump off early enough to not get crushed. While the core gameplay here may feel incredibly familiar, there’s a layer of depth in the little tweaks and features that make Mechanic Panic a great new addition to any survival gamers collection.

Complaints to be had are few, and are all focussed on the frills surrounding the game rather than the game itself. For example, high score games like these are fantastic with Game Center leaderboards, but for whatever reason they’ve decided to stick exclusively with OpenFeint. Honestly though – any issues we have with Mechanic Panic are really just little quibbles like this, and do nothing to detract from the experience of the game.

Fans of Ninjump and Ninjatown will absolutely want to make Mechanic Panic their next buy. It may be built on the same foundations as these popular vertical jumpers, but it brings enough new to the table to be well worth the purchase for any fan of the genre.