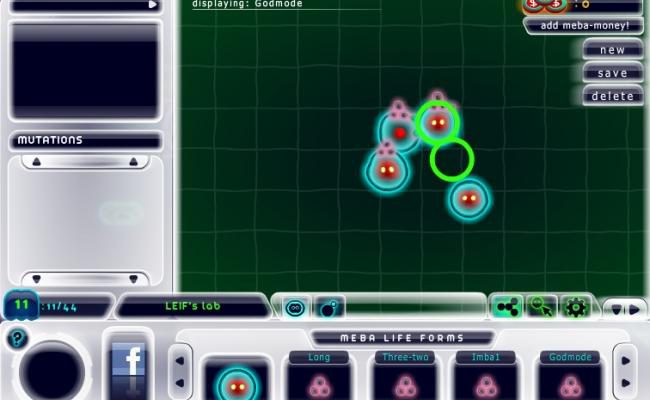 Mebas provides a unique take on social strategy games, but it still needs time to evolve

Mebas feels like it was designed by a well-meaning biology professor as an introduction to laboratory science, and I mean that in the best way possible. Sure, it fosters player-versus-player action by letting you build organisms that can attack those of your opponents. Sure, it includes the usual social standbys such as sending items to your friends. But nothing distinguishes this off-the-radar title so much as the thought-provoking pleasure of playing god on a microscopic level. It’s a great idea in theory, but its inviting multiplayer mode suffers from an almost total absence of players.

Mebas features both a single-player and a multiplayer mode, with the former largely designed as preparation for the latter. In the single-player, you start out with a lab with only the simplest of organisms, and you can create more by feeding the organism tiny globules that will eventually cause it to split into two organisms. Once you get enough mebas floating around in your digital Petri dish, you’ll gain a new level and some mutations to add to your existing mebas. It won’t be long, however, before you realize that these little guys only live for a few minutes, so you’ll need to head to your Life-Form Designer to create better ones. 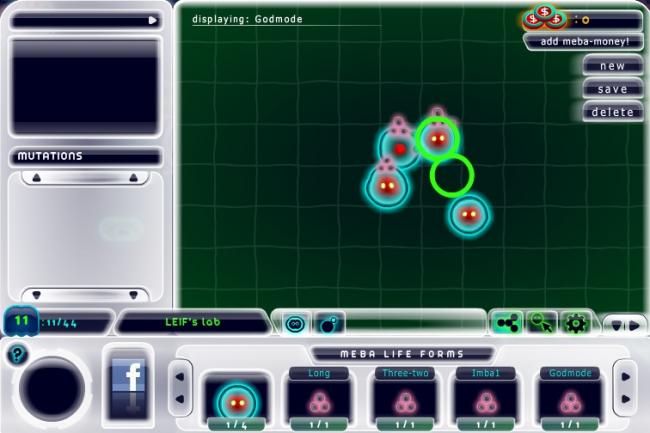 The Life-Form Designer is the heart of Mebas, and you can use it to create better specimens by using up to four of the mutations you received from leveling. Slap on a “long life” mutation, for instance, and you’ll make sure that your mebas last long enough to reproduce and increase your population. Equip them with flagella, and they’ll be able to use the tail-like rudders to swim more easily toward food. You can even guard against harmful viruses, cancer, or hostile mebas (in multiplayer) that make their way into the game with antibodies or resistance mutations. As the game progresses, you can add perks such as food emitters that automatically dispense food and lights that increase food production when placed around them.

If there’s a problem with this, it’s that each level throws out more and more mutations and other items that can only be purchased with real-world currency, or “Meba-Money” as it’s known here. You do get many of them through an “entry plug” that spouts random organisms or food every few minutes, but you’ll have to spend at least $2.50 (or 25 Meba-Money) for the smallest upgrade if you don’t feel like waiting. Some of these, such as projectiles that paralyze hostile elements or mutations that allow mebas to produce food through photosynthesis, seem like they’d be indispensable in later levels. 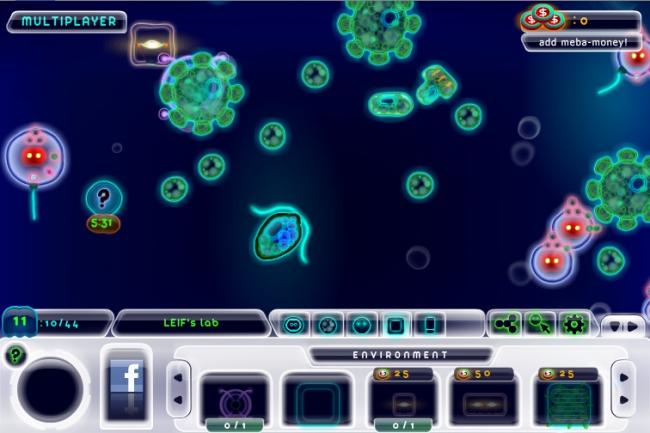 That’s not really a bad thing if you buy them in moderation, but you may want to buy most of them if you plan on playing in the multiplayer mode, which allows you to pit your mebas against those of random opponents or a friend. That is, if you can find anyone online. Mebas is still very much a new game (at last count, the Facebook “likes” only numbered to 51), and we were unable to find anyone online at all on the several occasions when we played. It’s a shame, since you can also modify your mebas’ mutations on the fly here (as opposed to designing them in the laboratory), and you can count on minimal imbalances since you’re only paired with players who can combat what you throw at them.

In fact, the multiplayer looks to be the best part of the game. Playing with your creations in your laboratory is fun and all, but using them to combat those of other players must feel immensely rewarding; almost like searching for the cure for cancer through the lens of a microscope. At the risk of blaspheming this daring new title with the educational tag, I’ll even venture to say that Mebas could have a bright future in classrooms if altered properly. As it is, you’ll find that Mebas‘ single-player mode provides a uniquely rewarding experience, but you’ll also discover that its multiplayer mode simply needs more time to evolve.