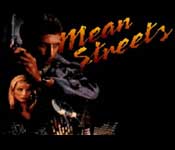 Cover-ups. Secret experiments. Mind control. Suicide – or was it murder? Hailing from the days when games came on floppy disks and home PCs were something of a luxury, Mean Streets (the first game in the Tex Murphy series) is as juicy a mystery as they come. It certainly shows its age in places, but delivers a smart whodunnit adventure that’ll put your sleuthing skills to the test.

Tex is hard-boiled PI , the kind who keeps a fifth of Jack Daniels in his desk drawer and who’d just as soon slug information out of a witness as coax it out of them. Tough though he may be, he can’t help but notice the softness of Sylvia Linsky’s hair as she hires him to find out what really happened to her father. The police are calling Dr. Carl Linsky’s death a suicide – a witness saw him  jump off the Golden Gate Bridge – but something doesn’t quite add up. Tex’s investigation uncovers any number of suspects who’d want the good doctor dead, including spurned lovers and shady scientists, and it’ll take all of his detecting skills to put the pieces together.

Mean Streets is a point and click adventure game without the pointing and clicking. Mice weren’t commonplace in 1989, when the game was released, so you’ll do all of your sleuthing via simple keyboard controls. Your investigation is divided primarily between interrogating suspects and searching locations for clues. The interrogating is a bit primitive compared to what you may be used to; instead of choosing particular dialog branches, you type in a topic you’d like to discuss, such as "insurance" or "Carl Linsky." Some people may need a bit of encouragement to spill the beans, so you can either Bribe or Threaten them. Threatening the wrong person will get you a face full of mace or a jab to the jaw, but you can always just re-enter the location and try another approach.

Locations not key to your investigation will be summed up with a well-written text description, but sometimes you’re going to have to comb a site for clues. Using the arrow keys, you’ll guide Tex around the room, looking at, moving, opening and picking up everything you can. Not everything you can shove in your pockets is a clue, though – some of it is just fodder for the local pawn shop. You’ll need cash to grease the wheels of your investigation, and your informant, Lee, can get you dirt on just about anything, but she doesn’t come cheap.

Though more modern games might help you out by keeping a journal for you or providing hints, Mean Streets does no such hand holding. Keep a notebook by your side as you play – you’ll need it to keep track of the copious names, places, and details that are vital to solving the mystery. The game does let you re-examine anything in your inventory, such as notes and journals that you pick up, but the slow and somewhat clunky interface means it’s usually easier just to jot things down yourself.

To prevent the gameplay from being too cerebral, Mean Streets unfortunately throws in two recurring action sequences: driving and shooting. You have to drive a hovercar from location to location, a time-consuming and tedious process. Flying the car is a complete drag; you’re better off just putting it on autopilot and waiting for it to reach its destination. Certain locations in the game are dangerous, and Tex will have to gun down anonymous thugs as he makes his way across a number of screens in a gun battle. This type of shoot/duck/shoot sequence was fun in old-school arcade games, but feels completely out of place in a brainy mystery. If only you could put those parts of the game on autopilot the way you can with the flying.

It takes a while to acclimate to the older control style (who knew not being able to use a mouse could be so disorienting?) and you’ll sometimes have to hit buttons a few extra times to get them to register. You’ll probably get a chuckle out of what used to pass for advanced graphics, too. There’s no question that Mean Streets shows its age in any number of ways, but it’s still a smart, well-crafted mystery that should please just about any armchair detective.