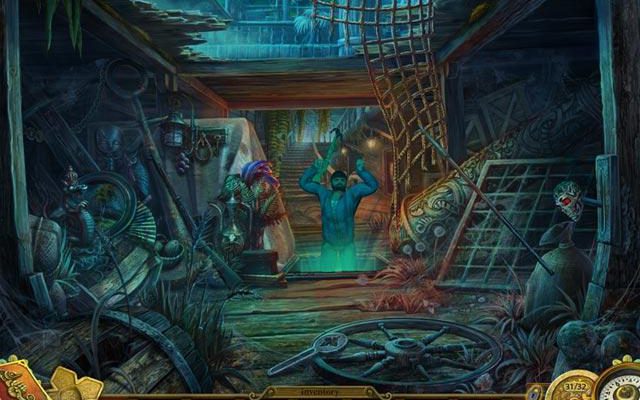 As with every Mayan prophecy, John Cusack is the only person who can save us

While ghost-filled pirate ships are fairly common settings within the hidden object genre, there’s still an opportunity for developers to make fantastic games in that subgenre, with Mayan Prophecies: Ship of Spirits being a prime example of that fact. While the game’s introduction is rushed and shallow, once you step foot onto an ancient Spanish galleon, you’ll find yourself in an experience that is hard to top.

Mayan Prophecies: Ship of Spirits follows a team of Coast Guard officers that have captured an animal poacher. Their ship crashes into a seemingly abandoned Spanish galleon that’s been lost at sea for centuries, and you’ll be given the chance to investigate every nook and cranny of this large vessel as you try to find your way back to dry land. The poacher has gone missing, a young boy is crying for your help, and there are Mayan artifacts and treasures scattered through every room. It’s an instantly gripping setup that makes you want to dive right in and explore.

Mayan Prophecies: Ship of Spirits is a fantastic example for developers looking to jump into the hidden object space. Its user-interface is incredibly friendly, offering a map that allows for fast travel, and for you to keep track of which locations currently have available actions. Most locations come with hidden object scenes that will activate upon first entry and then again sometime later in the game, but with these action markers on the game’s map, you won’t have to spend the entirety of your time backtracking through dozens of environments just to search for these reactivated scenes. 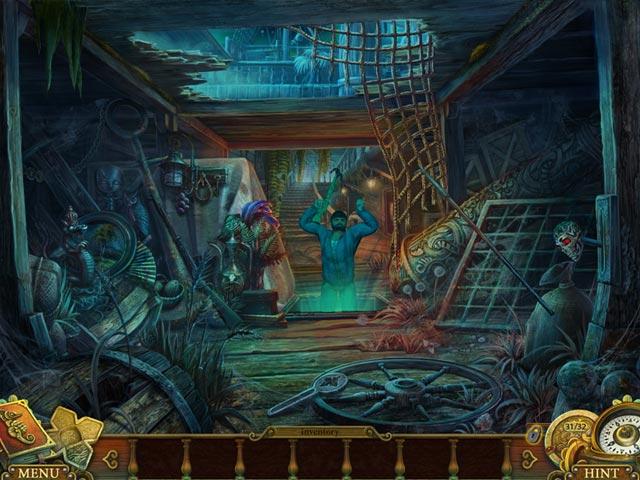 The hidden object scenes themselves are interactive, as you’ll find items on text-based lists with some requiring additional actions before they can be collected. You may need to pour wine into an empty glass, as an example, or unlock a treasure box to pick up an item that’s inside. The game’s three difficulty settings (plus the bonus custom difficulty setting) make these scenes as challenging as you want them to be (with a slow or nonexistent hint recharge timer), but if you’d rather skip the scenes altogether, you can do that too, opting instead to play levels of Mahjong to achieve the same end. You’ll need to make two tile matches for each individual hidden object, and can freely swap back and forth between the two modes of play as you wish. That is, if you’re stuck on the final item in a hidden object scene, you can feel free to simply make a couple of mahjong matches to finish it off without ever touching the hint button.

There are dozens of collectible items and achievements to unlock as you play, including those that reward you for collecting the hummingbird that’s also hidden within each hidden object scene. You’ll be rewarded for never skipping puzzles or using the hint button, and you can even collect a few dozen transforming objects that have been scattered throughout the main game, just to give you something else to do.

This isn’t to say that the main game is lacking content, as it’s full of puzzles, journal entries and cutscenes that keep the story moving forward. While many of the game’s puzzles are fairly standard, and come in the form of rope untangling, tile swapping or jigsaw puzzles, there are also a few puzzles that are more unique. One, for instance, may have you combining different colors of magical powders to create a potion, while another may see you painting a rainbow onto a piece of wood. None of the game’s puzzles are overly difficult, but some are challenging enough to require a few moments of forethought before ever making a move. 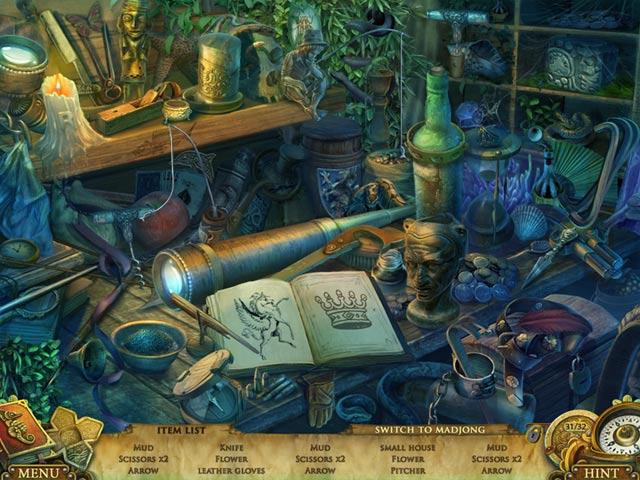 The sheer amount of items that are available to collect throughout this 3-4 hour adventure give the experience plenty of depth, and the addition of a bonus chapter after the main game thankfully provides more detail after a cliffhanger. The artwork is mostly dark and gloomy, but also beautiful and full of color in some of the Mayan statues and artifacts. While there’s voice acting and narration throughout the game, unfortunately some suffers from lack of emotion and is downright horrible as a result (the voice acting for the game’s main character is the worst offender). Still, this slight flaw on an otherwise awesome experience isn’t enough to tarnish the entire package. Mayan Prophecies: Ship of Spirits is one of only a handful of recent hidden object games that I simply haven’t wished to stop playing once I began, and there’s perhaps no better compliment I can give a game than that.