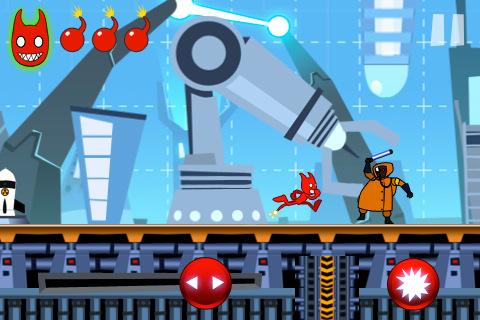 MaXplosion is a fun exploding platformer, but it’s a little too familiar

Ah, the platformer. It’s been a mainstay of just about every console since the Nintendo way back in the 80’s. They’ve made their presence known and planted their flag regardless of graphical prowess or sophistication of controllers. It’s little surprise they made the jump to iOS devices, or in the case of MaXplosion, “exploded” onto the scene.

MaXplosion puts you in the role of a mean looking cat/devil thing that is trying to escape the evil clutches of M.A.D (Ministry of All Destruction) using the only tool available to him, exploding. Instead of jumping or attacking, you’re able to explode yourself bounce up to different platforms or to attack enemies. You can chain a few explosions together to make it to higher levels (3 exactly) and they recharge whenever your feet touch the ground again.

Using this ability you’ll move through 20 levels of various difficulty, killing bad guys and solving the standard platformer game fare. Jump those gaps, reach that ledge, open this door, etc. It all feels so… regular.

The gameplay is nice as there’s only the one ability to worry about, so there’s only one button needed for it. Put that together with the slider bar and boom you’ve got a pretty easy to play control scheme.

Platformers can really be hit or miss on iOS devices. Some require more precision than virtualized joysticks can offer, and sometimes you’d just really rather have a controller in your hands while trying to navigate precarious jumps and such. Of course there are some that do it right, like Pizza Boy or Pixeline and the Jungle Treasure. I think the secret is to not re-create regular cross pads or joystick controls, but to play to the touch screen strengths (or at least not point out its shortcomings) and use things like the slider bar. In this, MaXplosion is a great success. 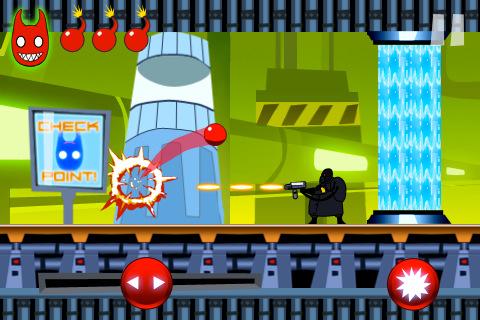 Back in 2009 there was a game for the Xbox 360 called ‘Splosion Man. In it, you played this crazed guy on fire that escaped from an evil lab by exploding himself to jump over ledges and crazed doctors. In MaXplosion, you play a crazy smiling cat thing that explodes itself to jump over ledges and crazed scientists. We’ll forgive you if you fail to see a lot of difference between the two – in essence, they’re really the same game. So close actually, that it’s hard to see where homage ends and blatant copying starts. You’ve probably played ‘Splosion Man, so I’m not going to spend anymore time talking about it, but they were so similar I felt it had to be mentioned.

There’s nothing inherently wrong with MaXplosion, but it really didn’t wow me that much. Alot of that probably has to do with the similarities with ‘Splosion Man, which was so similar that I had a hard time not comparing them – and MaXplosion loses in that comparison. For those looking for a platformer fix you can certainly do worse. MaXplosion is fun and offers good controls, but it’s seriously lacking in the originality department.