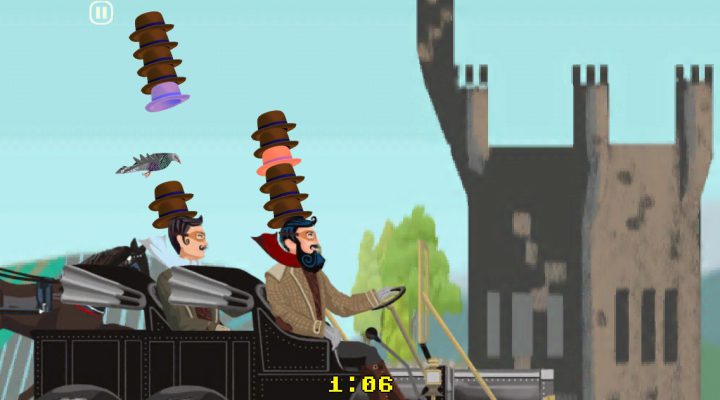 Hilarious and ridiculous setting, tone, and style present in everything from the characters to the menus

Lots of charming bonus characters and hats for separate purchase, but none of them are necessary for play

Touch controls are finicky and inconsistent

Single-player gameplay is slow and repetitive; only one of the two multiplayer modes is much fun

In the world of Max Gentlemen, a man is judged not by the content of his character, but the size of his hat tower. Sunday drives in a new Tin Lizzy are merely ruses to pilfer head coverings from emasculated carriage riders. A stout beer puts not hair on your chest, but hats on your head. Bare-chested bar fights break out in gentlemen’s clubs and at bear-infested picnics in the park, yet the dandiest challenge is keeping one’s many top hats aligned. A man—or woman, or secret octopus—with only one hat is no man at all.

Everything about Max Gentlemen is ridiculous, and it’s wonderful. It’s an old-timey romp of manly insanity in which insults like “Your family tree was a shrub!” and “Loose moraled gentleman!” are tossed about with raucous sincerity. Smoking jackets burst at the seams upon flexing and end-level scores are punctuated by the gyrating hips of a self-assured strongman. It’s a silly sideshow whose origin as a drinking game inspired by a penis enlargement spam email is readily apparent: strictly for-fun nonsense that elicits easy laughter. 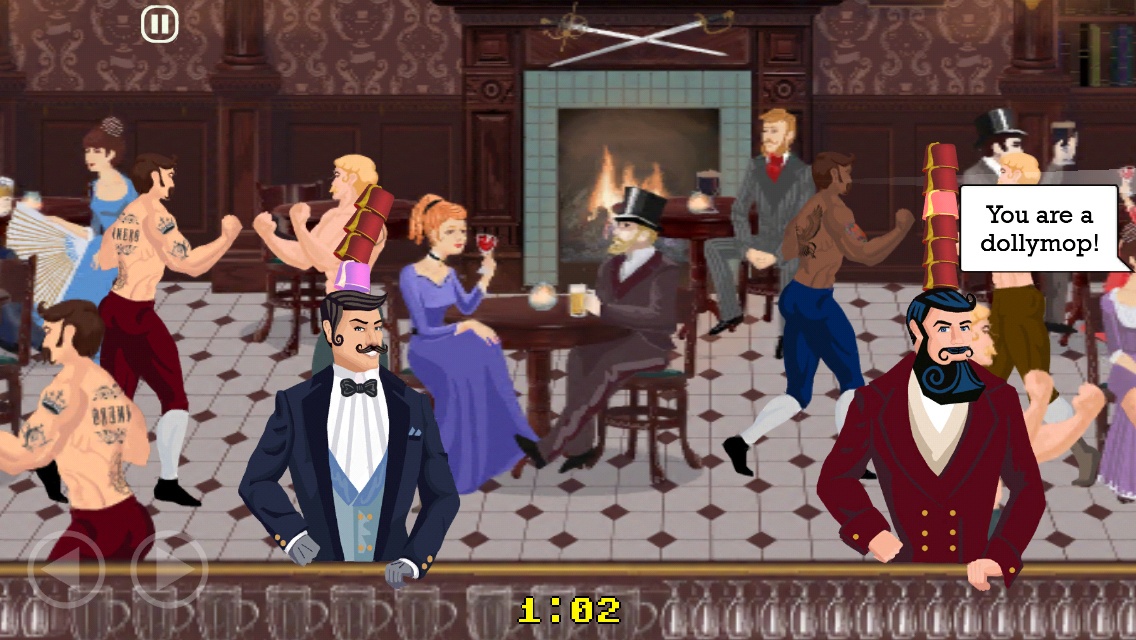 This personality is the gold medal pinned to Max Gentlemen’s clean-shaven chest, and it greatly outshines the actual gameplay. There are two modes available in this pre-prohibition party game: Dodgey and Drinky. Both revolve around the same hat-stacking principle that separates the gentlemen from the gentlefops. In Dodgey, players set out on a semi-endless motortrip, collecting hats from carriages and dodging birds that will knock hats from their head. Every hat collected adds to the score total while each one lost reduces your hat-health from the starting total of ten. Losing all your health ends the trip and finalizes your score.

Drinky has a similar setup, although you’ll directly control your dandy’s movement at a bar, swaggering left and right to collect beers as they’re placed upon the counter. Each beer adds a hat to your ever-growing crown, and you’ll need to dodge flying tumblers and other fighting paraphernalia from the bar fight ongoing in the background. As in Dodgey, “dodging” consists of jumping your pile of hats by selecting a specific one and releasing your finger when you want it to jump. This creates a momentary hat-gap through which objects can fly unmolested, allowing birds, beers, boomerangs, and your hats themselves to maintain their course. 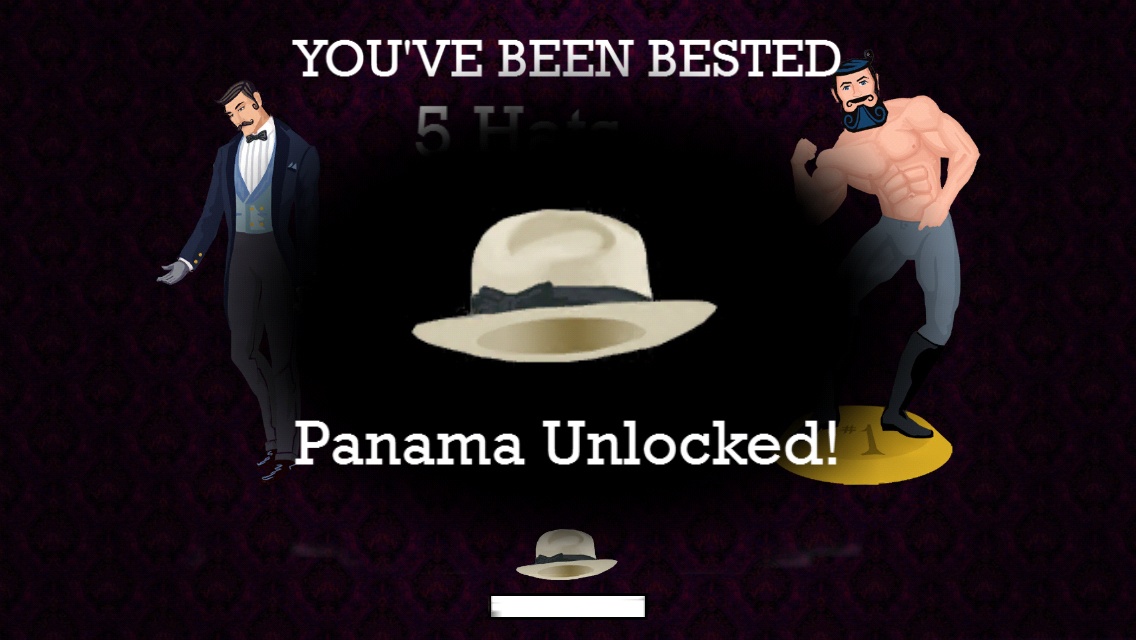 The problem is that, outside of the spirited ridiculousness of what you’re doing, actually doing it isn’t always fun. The touch controls are oftentimes unresponsive, and overly sensitive at others. Challenge versions—which pit you against an AI opponent in either game type—are so skewed to the AI that even the easiest difficulty sees them make zero mistakes. We’re left with a fairly repetitive pair of single-player game modes that play the same, look the same, and end the same every time. Unlocking new hats provides an additional goal and variation, but the novelty of a tower of trilbies soon wears off.

Max Gentlemen’s saving grace, then, should be its local multiplayer over Wi-Fi. Playing against the computer is a wash since it is an expert at hat-stackery. Human opponents offer a more balanced and engaging competition, as well as ears for your cantankerous insults. Unfortunately, only one of the two game modes really feels suited to multiplayer: Dodgey forces players to take turns collecting their assigned hats, making it more about separately dodging and hoping your hats are not poorly positioned directly over a bird. 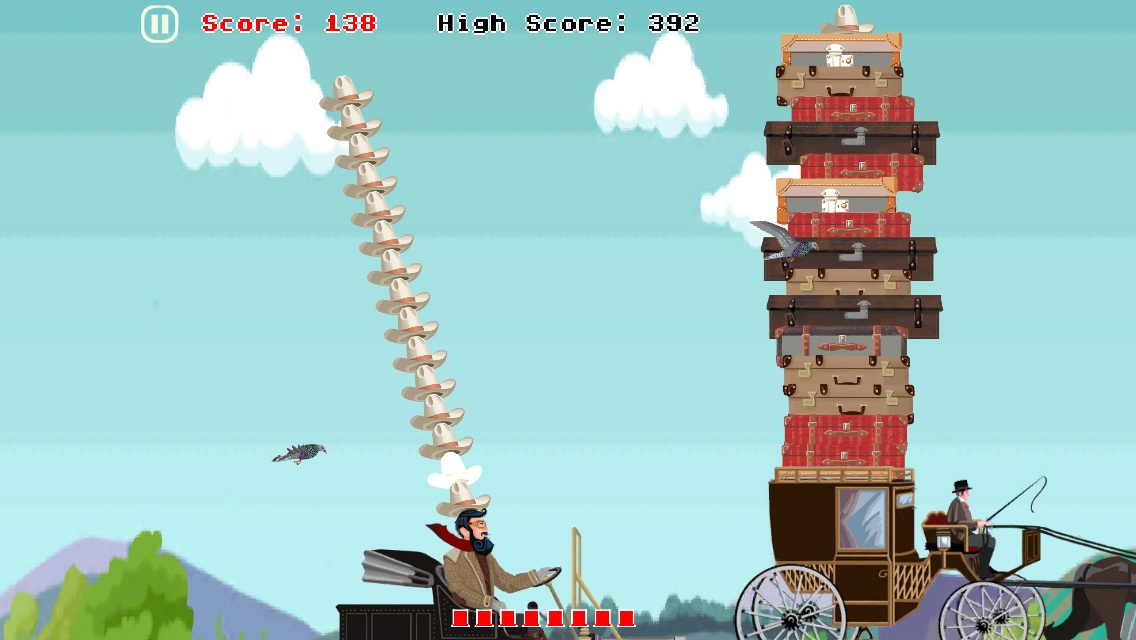 Drinky provides a more robust two-player challenge, as players must dash to each individually available beer before their opponent reaches it while simultaneously dodging flying debris. It’s a much more mano a mano test of gentlemanly arcade skills, but still falls victim to unpredictable controls and random luck: on the small game screen, often a player will be standing in the exact place a beer is set, awarding it to them without any effort and making an already simple competition even less manual.

As it stands, Max Gentlemen is more parody than pastime. It’s a hilariously quirky testosteride that is bursting with lovable, bizarre personality. But as a game, solo or multiplayer, there’s not enough here to warrant repeat trips. Like any drinking game, Max Gentlemen is good for a few rounds but should be shelved before it comes to fisticuffs.