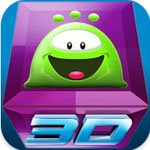 Ever suffered from a severe bout of deja vu? Rare are the days that pass by without me thinking I’ve been somewhere in the past or spoken to someone that, in reality, I’ve never actually met before. It’s an alarming feeling that can bug you for the rest of the day, but it’s one many iPhone gamers suffer from on a regular basis – most notably when they’re sitting down to tackle yet another match-three puzzler.
Yes, it’s unlikely that Match 3D Flick Puzzle will be the first match-three you’ve come across if you’re an App Store aficionado, but PlayScreen is keen for its latest not to get lost in the mix. While first impressions might suggest Match 3D has little to distinguish itself from the crowd, play revolving around lining up three or more matching coloured squares by switching their order, in truth, the 3D element that the game’s name hints at changes things rather dramatically.
Essentially, you take charge of six 8×8 grids, the aim being to clear as many match-ups as possible. With play that has much akin to fellow match-three marvel Chop Sushi!, your only job is to switch blocks around, but in Match 3D they have to be directly next to each other. If your switch doesn’t lead to a line being created, it simply isn’t allowed.
Of course, the game’s 3D nature means that moves you make on one side can effect the blocks on any of the others, squares wiped from the map replaced by those sat directly above them. It also means that each game has a huge play area, a simple flick of your finger spinning the cube in any direction your choosing. Even if you run out of match-ups on one side of the screen, for instance, chances are there are still plenty of remaining lines on one of the cube’s other six sides.
Those match-ups are your main aim from beginning to end, with reaching each level’s target number your goal whether you’re playing ‘classic’ or ‘survival’ mode. The two variants are, in fact, rather similar, the idea being to reach your target before the clock runs down, each clearing you make adding vital seconds to your allowance. But while the lines you match-up are replaced with new ones filtering down from the top in classic mode, in survival mode they lay empty, each tie-up you make gradually deconstructing the cube from all sides.
Coincidentally, this also means that the longer you play, the harder finding further matching lines becomes, making the bonuses on offer crucial for long-term progress. Unlocked the more matches you make, these bonuses can do everything from moving blocks from one side of the screen to the other to pointing out potential lines you’ve not yet spotted, serving as a much needed boost when play begins to drag.
Not that you have much time to think if you’re playing against the clock. Thankfully, however, Match 3D lets you tailor its challenge to suit your own style, right down to the smallest detail. Not only can the clock be disregarded completely, but you can also eliminate other elements of play, such as bomb blocks that take out reams of blocks when they go off, or locked blocks that complicate matters by simply not budging. It’s possible to mould Match 3D into as tricky or as tame a task as you’d like.
It’s this willingness to bend over backwards for its audience that makes Match 3D Flick Puzzle a fairly unique package in an already crowded and clichéd market. Yes, there’s a fair chance that match-three connoisseurs will have play pinned down within just a few minutes, but Match 3D‘s flexibility means even over-familiarity can’t dent what is otherwise a solid, satisfying outing from PlayScreen. Who said deja vu was always a bad thing?