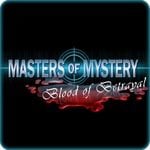 Masters of Mystery: Blood of Betrayal, a new hidden object game from Canadian developer Big Blue Bubble, will feel very familiar to those who played Masters of Mystery: Crime of Fashion, a polished and challenging hidden object game released earlier this year. But that’s no reason to avoid it-especially since this CSI-like sequel offers up a few welcome improvements.

Like a slicker story. Players once again step into the shoes of detective Carrie Chase as she works a high profile case that involves plenty of dead people, a gang of drug smugglers, and what appear to be some crooked cops. There are lots of interesting twists and turns, a vague love interest, and even some voice work-a first for this fledgling series. Most of the actors are pretty good, too, though keen-eared players will be able to make out a few decidedly Canadian accents, which run in contrast with the game’s Manhattan setting.

It was important for the narrative to be believable because it plays a major role in each of the game’s hidden object scenes. Carrie moves from one location to another based on the clues she finds at the previous scene. A business card might lead her to a limousine company, while a bottle of medicine will take her to a pharmacy so she can learn more about its prescription.

The hidden object puzzles are, for the most part, very well done. The scenes are beautifully rendered, almost to the point of being photo realistic. Plus, the objects for which we hunt aren’t scattered randomly about. There are no ghostly shapes hidden in the sky or items that have been discolored, shrunken, or enlarged to better blend in with their environments. Everything is the right size and shape, and, by and large, located in a sensible area. If you’re looking for an ashtray or a wine glass, chances are it will be on a coffee table. If you’re searching for shoes or socks, check the floor.

That’s not to say the game is easy. Far from it. Some of the puzzles can be devilishly challenging. Finding individual rounds of ammunition, for example, can be extremely difficult due to their small size and the fact that they could be virtually anywhere. What’s more, Big Blue Bubble isn’t averse to hiding objects in the crevices of couches, behind cabinets, or under piles of debris. A giant table may be covering all but a few inches of a large road block sign, and a black gun could be hiding deep within the shadows under a desk.

That’s when our forensic tools come in handy. A flashlight illuminates the darkened areas while a magnifying glass enhances smaller objects so we can better see what they are. We also have access to a UV light to find bloodstains and a brush to locate fingerprints, but we don’t need to use them very often.

Even so, the greatest criticism to be leveled against Blood of Betrayal is that some of the objects are just too hard to find. In one darkly lit scene I was examining the aftermath of a deadly car crash and I had to use the hint button at least ten times (there is no limit, thankfully) to find objects such as pens, coffee cups, and handcuffs. Even once they were pointed out I was often unable to clearly see them. I’d have been searching forever had help been unavailable. It’s safe to say that at least one sadist is employed at Big Blue Bubble.

Still, most of the hidden object puzzles are fair and enjoyable.

So, too, are the contextual puzzles that take place back at the lab. They’re mostly rehashes of the same puzzles from the original game-players need to identify specific license plate numbers and fingerprints as they flash by, and there are a few spot-the-differences-between-images puzzles that fit nicely within the narrative (including one in which we need to figure out how things have been moved around Carrie’s apartment after a break-in)-but they’re nonetheless entertaining.

I particularly enjoyed one that involved locating occurrences of specific words in a number of documents to identify a person’s handwriting, and a couple of others that had me putting the items I’d taken from a scene back in their original positions.

Masters of Mystery: Blood of Betrayal doesn’t revolutionize hidden object gaming, but that’s not what it sets out to do. Its aim is simply to appeal to discerning HOG lovers who are looking for a quality entry with decent length (it’s nearly four hours) in a popular genre crowded with a few too many quick cash-in games.

This is one HOG you can buy with confidence-assuming you’re up to a challenge.

Echoes of the Past: Royal House of Stone Review