Masquerade Mysteries: The Case of the Copycat Curator Review 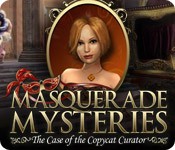 Keeping a hidden object game fresh and free of repetition is difficult, but North Carolina-based Merscom proves they’re up to the challenge with their new Masquerade Mysteries: The Case of the Copycat Curator, a game with a swiftly moving narrative and a wide variety of challenges and mini-games.

Our heroine is Joy Black, a private investigator sent to look into strange doings at the Museum of Natural History. Players spend the entirety of the game exploring this large building, moving from room to room at will—almost like a point-and-click adventure game—as they search for clues that will unravel what’s happening to priceless artworks stored in the facility.

The setting provides a good foundation for Masquerade Mysteries’ signature side game: putting together disguises with the objects we find. Whether it’s a waitress or a security guard, a bedazzled guest or a behooded crook, it’s fun to sort through the junk we’ve collected and assemble outfits.

And that’s not the only thing players do with the objects they locate. Turns out Ms. Black is a handy, do-it-yourself kind of girl capable of constructing everything from a makeshift blowtorch to a magnetic grabber with nothing but random objects like lighters, duct tape, and elastics. Like the costumes, there’s not much challenge to assembling these tools other than sorting through a pile of stuff, but it’s still enjoyable to see what goes into something like an ad-hoc glass cutter or lock pick.

Of course, the main activity is finding random items based on text descriptions, and Merscom’s philosophy in hidden object game design seems to be to keep things real. The objects we search for are, by and large, the proper size and colour and in logical locations. You’ll find money in a safe, a hammer in a tool box, and a jacket draped over the back of a chair. The unlimited-use hint button, which takes about a minute to recharge, is nice to have on hand, but not often necessary.

There are a few goofy placements, like an Aladdin’s lamp hanging from a chandelier or a skateboard sitting atop a piece of expensive lab equipment. Plus, clues are occasionally a bit to broad, as in one scene in which I was tasked to find a “handle” and was annoyed to discover that while there were several in the room, including a broomstick handle, projector screen handle, fire extinguisher handle, skipping rope handles, pitcher handles, and more, only one was acceptable. And while the ability to move from room to room is freeing, it sometimes results in frustration when you can’t figure out in which room the object you’re looking for is located.

Still, the searching is generally fun and fair.

It’s also more interesting and multifaceted than that of the average HOG. Sometimes we’re just looking for stuff, but usually the search itself has been turned into a game of some sort. For example, when searching for objects that Joy wants to photograph we need to first decode riddles to determine what that object is (the clue “lives by eating, dies by drinking” might refer to a fire, while the hint “one ear, one mouth, no legs” could mean a phone).

There are also scenes in which we don’t take objects but rather place spy bugs on them, and still others in which we aren’t told what to do but instead must use our common sense to determine what needs to be done. For instance, while dressed as a maid, Joy has to tidy a lobby. We aren’t told how to do it, but once we’ve picked up all of the random items lying around it’s up to us to figure out that we have to use the rag we collected to clean up muddy footprints and click on various pieces of furniture to straighten them out. It’s a nice way to make players think for themselves in a game in which everything else is more or less clearly spelled out.

Between all of the hunting and pecking are a variety of other activities, such as puzzles in which the player needs to spot the differences between images, pattern identification challenges, and some surprisingly tricky tile conundrums, including one in which players have to reconstruct a pair of identical torn cards at the same time, figuring out which pieces belong to which card. They’re never too tough, but you can skip past them if you’re unable to solve them.

Turning to aesthetics, the scenes are crisp, clean, and nicely drawn. A few areas are a bit too dark, but it’s usually pretty easy to make out what you’re looking at.

A bigger concern is with audio. The score is decidedly generic and composed mostly of artless guitar pieces, both slow and fast. Worse, though, is that we found the audio prone to random bursts of dirty noise layered overtop the music, almost like what you’d hear in a blown speaker. Luckily, little is lost if you simply turn the volume down and listen to your own music.

All in all, though, Masquerade Mysteries is a bit better than your average HOG. It’s not particularly replayable, but the three-to-four hours I spent with it felt adequate and satisfying. By no means essential, but it should prove a decent fix for ravenous HOGgers.