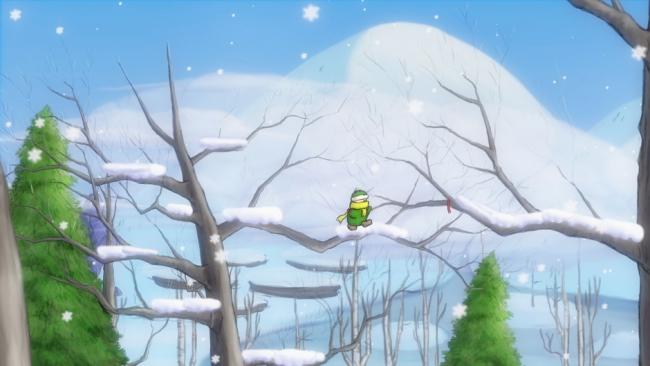 Marvin’s Mittens captures the unforgettable wonder of being a small child in deep winter.

Marvin, a young lad of indeterminate age, has lost a mitten. Fortunately, he has the time and the inclination to look for it, and a wooded winter wonderland surrounding his house that makes his quest both epic and utterly worthwhile. Marching through the trees, but never beyond the reach of his mother’s call, Marvin climbs snowy hills and trees, discovers small animals and birds, and even stumbles across a group of elves – real, live elves! – who share his problem: They, too, have lost their mittens.

The intrepid Marvin boldly proclaims that he will find all their mittens, and in gratitude, the elves grant him the power of flight, brief and fleeting, but flight nonetheless, that opens to him a world far beyond the power of his short legs. They also teach him to see and collect the magical snowflakes that power his ability; the more snowflakes he collects, the higher he can soar. And so the grand adventure begins!

In one sense, Marvin’s Mittens is a fairly conventional 2D platformer, with a lead character who explores game levels by climbing and jumping from ledge to ledge, collecting snowflakes – the stand-in for the coins, stars and gems that feature in other such games – and unlocking more advanced levels. But it’s also very different. Marvin can’t jump very high but once he learns how, a second press of the jump button sends him spinning off into the sky, and with his sled he can traverse great swaths of land very quickly and access special areas of the world that would otherwise be out of his reach. The game utilizes a checkpoint save system that can be engaged whenever Marvin sits down for hot chocolate with his elven friends, and also saves automatically every time he returns home to sleep and dream of his adventures.

Exploration is paramount and since Marvin cannot be hurt, there’s no risk in taking the occasional leap of faith. Marvin’s ability to fly increases as he accumulates snowflakes and you’ll have to revisit old levels a few times to get them all – some are placed too far out of the way to reach during the game’s early stages. He also has a strong artistic bent, charting the progress of his exploration with his sketchbook, in which he draws pictures of the foxes, blue jays, squirrels, lynx and other woodland creatures that he discovers on his way. And even though each new day begins from the porch of Marvin’s house, movement across the world is made quick and easy by a sleepy little elf with a shovel who, when you find him, digs tunnels that allow Marvin to rocket to the deepest recesses of the woods in mere seconds aboard his trusty sled. 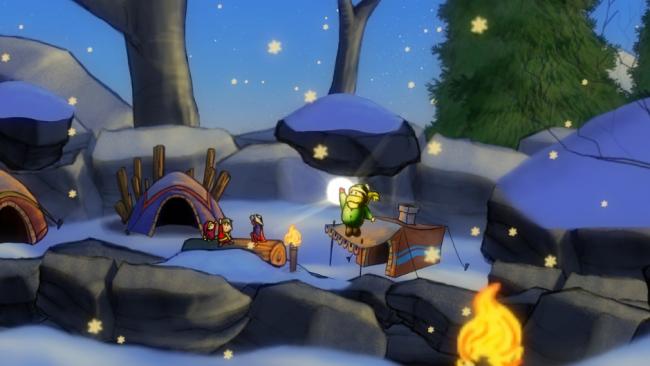 The gameplay is simplistic and there are no achievements, trophies or online leaderboards. Instead, Marvin’s Mittens is a video game vision of Bill Watterson’s Calvin and Hobbes, driven by unbridled nostalgia and sentiment, and unless you’re immune to such charms (and what a shame if you are), it works to perfection. The hand-drawn art style is absolutely gorgeous, with an amazing white-blue color palette the captures the glow of early winter twilight with stunning accuracy, and the music, flowing from fast-paced themes of adventure to soothing, wordless lullabies that play as he sleeps, is every bit as good. Voice acting is minimal but very effective – Marvin’s mom calls for him and he replies with just a hint of dejection in his voice – and even his breathing, which grows heavier and more labored as he runs, sounds like the real thing.

And what it lacks in conventional goal-oriented platforming features, it makes up for in surprises and secrets. Mighty snow forts will rise out of the ground, while great, green boy-eating dragons lurk in the caverns below. The elves will even open the pages of their famed Elfcyclopedia, revealing to Marvin some of their greatest secrets and stories as they sit with him to share a cup of cocoa. And if the final level doesn’t elicit a “D’awww!” and a goofy grin, then you must have a cold heart indeed. 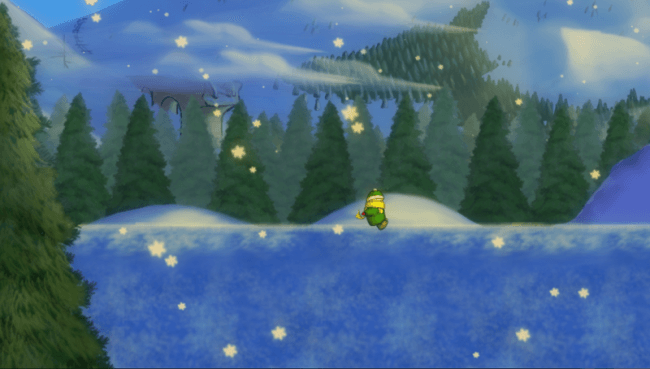 Marvin’s Mittens isn’t a particularly long game – you could probably get from start to finish in a determined afternoon if you really wanted, and certainly no more than two – and people who aren’t happy unless they’re beating somebody’s high score should probably play something else. But anyone interested in a more contemplative adventure through the marvels of childhood should absolutely play this. Once while I was playing I actually said, “Oh, come on!” out loud when Marvin’s mom called me in because all I wanted was a few more minutes outside, and I can just about guarantee that you will, too.