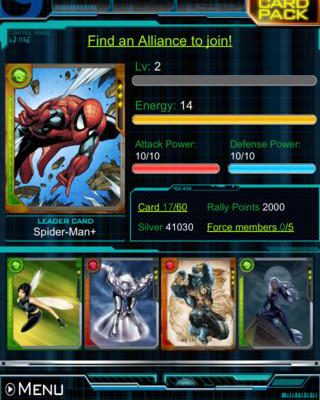 My deja vu senses are tingling!

The nefarious Hydra is up to no good, and SHIELD is counting on you to put a stop to it! And although Marvel: War of Heroes, the new collectible card battle game from Mobage, will be immediately and unmistakably recognizable to fans of a certain other popular CCG, that doesn’t mean it’s not any good – it is.

It’s not fair to compare every collectible card battle game that comes along to the famed Rage of Bahamut, but in this case it’s both apt and entirely appropriate. Marvel: War of Heroes is very, very similar to Rage, but with a shiny new coat of superhero paint and an even shinier official licensing deal with Marvel. Instead of dragons, warriors and demigods, you’ll be playing with Marvel’s most famous heroes, villains and… well, yes, demigods.

It seems that the no-goodniks at Hydra have joined forces with a who’s who of supervillains to scrounge and steal an element called “iso-8,” which will imbue even their lowliest rank-and-file soldiers with unimaginable powers. To thwart their plans, SHIELD has called upon you to work side-by-side with select superheroes to battle their forces and recover iso-8 for your own uses. Guided by these heroes, you’ll play through a series of missions, battling underlings and collecting cards and special items as you go, and eventually come face-to-face with a villainous mastermind who must be smacked around and then sent off to the Vault. 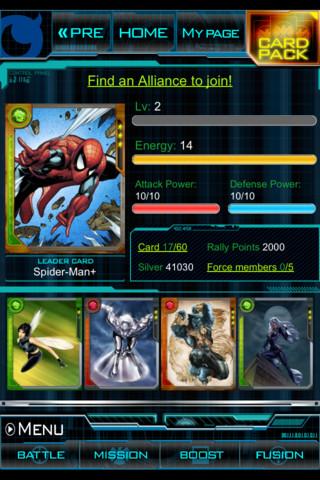 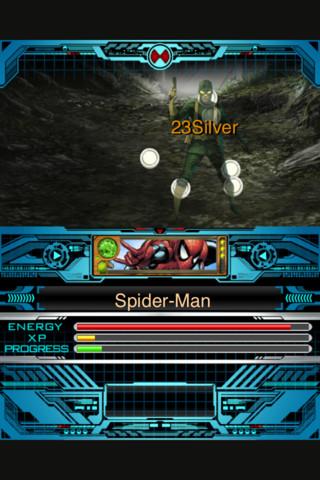 It sounds exciting, but like most other CCGs, combat is entirely automatic. Battles in missions are simply a matter of tapping the “Attack” button (which is functionally identical to a “next” button) and while it’s possible to lose the culminating battles against boss villains, it’s not very likely, especially in the early levels. Most of the cards you’ll earn in battle are fairly mundane and weak, which encourages trading, competitive play (more on that in a bit), and of course forking over real money to buy “booster packs” that offer cards unlikely to be found through conventional grinding.

The number of turns you can take in a single session is dependent upon your “energy,” which along with your attack and defense values can be increased with Status Points earned by completing missions and gaining levels. Energy recharges at a set, slow per-minute rate, so the more energy you have, the longer you can go at one time and the faster you’ll advance in levels. Sooner or later, though, you’re going to have to put the game down and go do something else for awhile – unless you’re willing to purchase, again with real money, energy packs that completely restore your energy and get you back into the fight immediately.

Perhaps even more prominent than the conventional single-player missions is the player-versus-player action. Some cards are better than others, after all, with rankings ranging from “common” to “legendary,” and they can also be boosted with other cards and fused with cards of the same type to increase their power. Once you’ve built up your deck, you can try your luck against other players, putting your best cards against theirs for bragging rights, silver and special items — some of which can’t be acquired any other way.

Marvel: War of Heroes does bring a bit of its own unique complexity to the party. Cards are assigned to either a Speed, Tactics or Bruiser category, which gives them an advantage against other cards in different categories and also allows them to be combined to form “combos” that further increase their effectiveness in PvP battles. Players can also earn “mastery” over cards by using them regularly, which boosts their power even further. 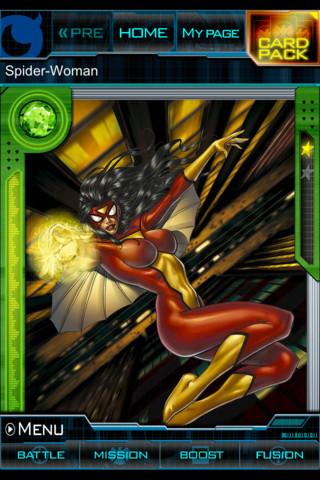 But the real attractions here are the Marvel comics characters we know and love. Some are more famous than others – the game’s App Store page mentions every major hero who appeared in the recent Avengers flick, but you can expect to see a lot more of Franklin Richards and Mockingbird in the early going – and while I don’t want to say the gang’s all here, it’s pretty obvious that most of it is. The art, by two guys I’ve never heard of plus Simon Bisley, is of comic-book quality, but just like real comic books, some examples are better than others and bits of anatomical “oddness” do pop up now and then.  Each card also includes a brief background of the character in question, which is a nice touch, as well as attack and defense ratings and, where applicable, a special ability.

The writing, on the other hand, is just a wee bit off. Not that anyone is expecting great scripting from a CCG, but there’s a certain vague clunkiness here and there, such as the link on the main page that states “For all that is already Pre-registered,” or when The Punisher tells you, “These streets don’t feel right. Let’s fix that kid.” Why are you so mad at this poor kid, Frank, and are you going to shoot him or just tune him up a bit? And while the layout is very pretty and SHIELD-like, it’s also a bit cramped; the menu button that grants access to your deck, the trade menu, player searching and many other functions is especially tiny and easy to miss.

But overall, and aside from its extremely derivative nature, this is an excellent collectible card battle game, particularly for gamers who have a taste for superheroes in general and the Marvel Universe in particular. A very nice bonus side effect is the fantastic fodder for comic nerd arguments: The Vision is common but Black Widow rare? Come on! Who designed this thing? If that sounds like a debate you’d like to have, then Marvel: War of Heroes is definitely for you. Excelsior!