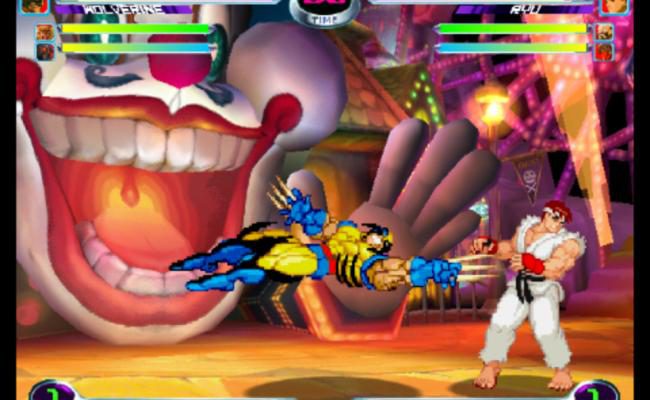 A few Hadoukens short of a knockout

Nearly everyone who has ever competed in tournament videogame fighting is familiar with 2000’s Marvel vs. Capcom 2. It’s deep 3 on 3 gameplay, enormous cast of characters, and colorful sprite-based visuals left it as the golden standard for team-based fighters for over a decade (until Marvel vs. Capcom 3 came out in 2011). Now, Capcom aims to bring this all-time classic to the most popular gaming platform available today: iOS.

At least, that was their plan. 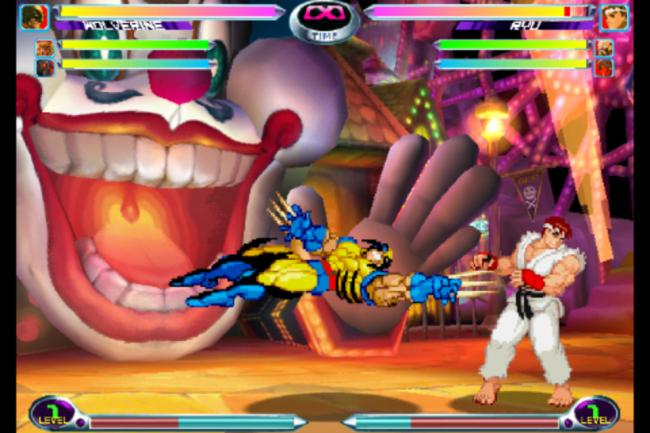 Much as the title would leave you to believe, Marvel vs. Capcom 2 is all about duking it out with your favorite comic book and videogame characters. From Wolverine to Mega Man to Ryu to Doctor Doom, there are a whopping 56 fully-playable characters to battle with. With three fighters battling at a time, there are thousands of unique combinations to choose from.

That “thousands” number reaches far deeper when you take into account the game’s signature assist system. One fighter fights at a time, but your other two “benched” characters can tap in at any time to assist you in battle. Each character has three distinct assist attacks available creating a fighting experience that is absurdly deep.

Combat itself, however, is simple enough for newcomers to understand. Characters have two standard attacks: punch and kick variations, followed by special attacks and assist attacks. The latter two attacks are powered by a meter that grows as you deal and absorb damage. Standard specials range from projectiles to special combinations, while super attacks consist of extreme abilities that consume the entire screen.

Touch screen devices have traditionally struggled with delivering this kind of system, but Marvel vs. Capcom 2‘s slide controls work pretty well. Each type of attack (punch, kick, special, assist) is mapped to a single button, while specific commands can be performed by swiping individual buttons in a desired direction. 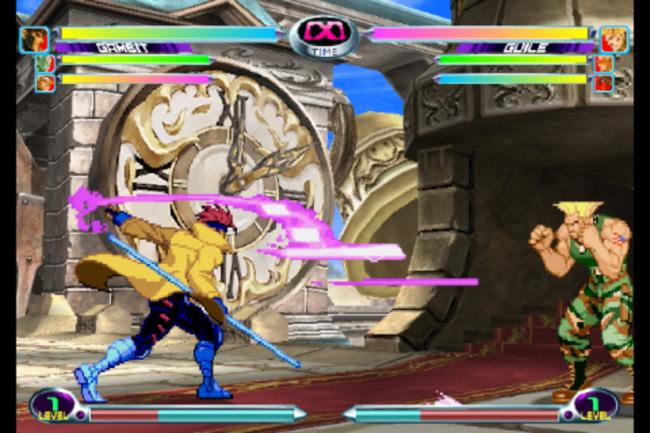 For example, simply touching the assist button will call a teammate into play to perform an assist attack, while swiping the button to the left or right will call them to tag in for you. Swiping the same button downward will ignite a super combo between your entire party, providing you’ve accumulated enough meter. This swipe system allows normally complicated commands to be executed in a fairly simple way.

Outside of the slick control system, however, Marvel vs. Capcom 2 isn’t exactly a faithful port. While the game is modeled after the 2000 Sega Dreamcast release, it can’t even match that version visually. The sprites are only slightly blurrier, but the animations are significantly slower and choppier.

Compared to all other versions available (Arcade, Dreamcast, PS2/Xbox, PS3/Xbox 360), it’s clearly the worst-looking Marvel vs. Capcom 2 to date.

In a game that defined hectic and lightning-fast combat, the sluggish frame rate can get pretty frustrating. Because of it, attempting to perform specific combos can delay by as much as a second or two (the equivalent of an eternity in competitive fighting games). The control scheme is good, but that doesn’t always mean that you’ll always feel in control while playing. 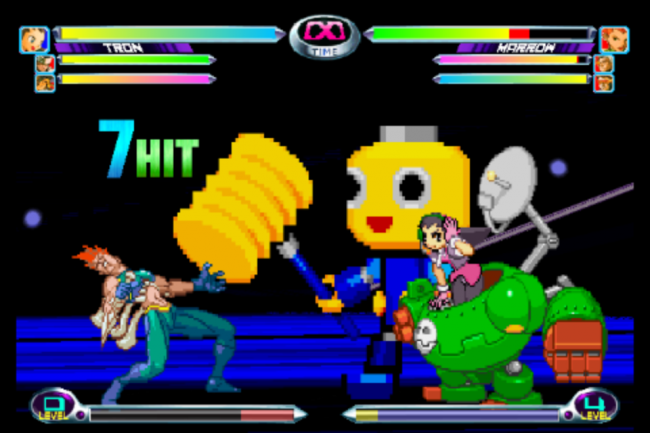 Aside from gameplay hiccups, Marvel vs. Capcom 2 remains loyal to the console versions in the various modes. Arcade, training, attack mode, and vs mode are all available from the get-go. It’s just a shame to see that multiplayer is limited to local only. Capcom’s perfectly capable of global multiplayer (just see Street Fighter IV Volt), so it comes off as lazy when they’re unwilling to implement it here.

It boggles my mind that Capcom can flawlessly port new titles like Street Fighter IV and Ghost Trick, but somehow struggle with classics like Mega Man X and Marvel vs. Capcom 2. It still contains all of the characters, modes, and combat of the original, but limiting that with occasionally slow and murky presentation gives the impression that Capcom is simply trying to make a quick buck as a cross promotion with the Marvel-heavy Avengers film.

If you own an Xbox 360 or PS3, I highly recommend their respective downloadable versions for this title. They might be a good ten dollars more expensive each, but the improved visuals, speed, and online vs. modes are well worth it.