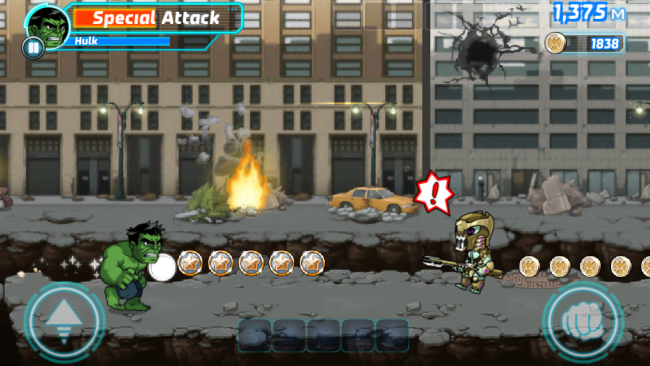 I’m a sucker for superhero games. If you follow my scribblings here at Gamezebo, you’ll have probably figured that out already. So when I learned that Disney was bringing their Korean mobile hit Marvel Run Jump Smash! to the West, I was ready to welcome it with open arms.

…but it’s gameplay just didn’t welcome me back.

Marvel Run Jump Smash! is an endless runner that’s trapped pretty firmly in the past. You’ll have a selection of superheroes that you’ll cycle through, but in the end it all plays out very much the same: you’ll run, you’ll jump, you’ll smash. Lather, rinse, repeat.

When each game starts you’ll take control of a SHIELD agent (Nick Fury if you prefer boys, Maria Hill if you prefer girls) as they run endlessly towards the other end of the screen, collecting coins and avoiding or attacking bad guys along the way. Periodically you’ll see a superhero token that, when touched, will switch your SHIELD agent out with a superhero for a short while. Each hero plays a little differently – Iron Man can fly, for example – but the differences between heroes are disappointingly small.

And that’s it, really. As an endless runner, Marvel Run Jump Smash! fails to bring anything new to the table. Worse yet, it fails to deliver the system of upgrades that we’ve seen in every runner since Temple Run, or on game-changing equipment and power-ups like in the equally ancient (by mobile standards) Jetpack Joyride.

Instead, the only thing that you’ll find outside of the regular play is the ability to unlock additional superheroes. You can do so by earning premium currency every run, but the prices are laughably steep. In my experience, it would have taken 300+ plays before I’d even come close to having enough gold to unlock a new hero. You can purchase them with real money (of course), at around $3-$5 a piece. 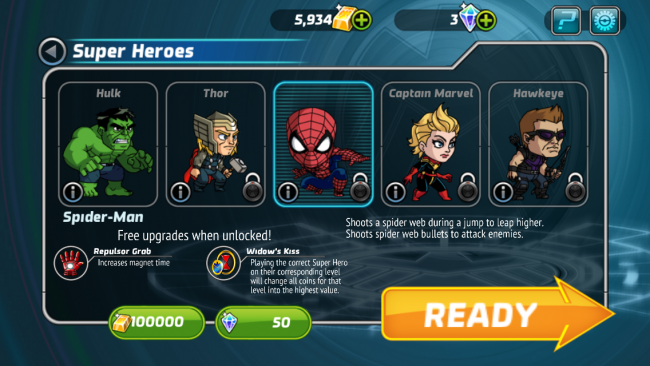 No offense, Marvel, but if I’m not seeing a big play difference with the heroes I have, I’m not terribly likely to go shopping for more.

As if the game wasn’t overwhelming enough, the character models are also a little too low-res for 2014. Playing on an iPhone 5S, it was clear that Run Jump Smash! wasn’t concerned with having art assets optimized for high end devices – which admittedly may be more a result of its past focus on the Korean market than it is an intentional slight on Retina Display-loving gamers.