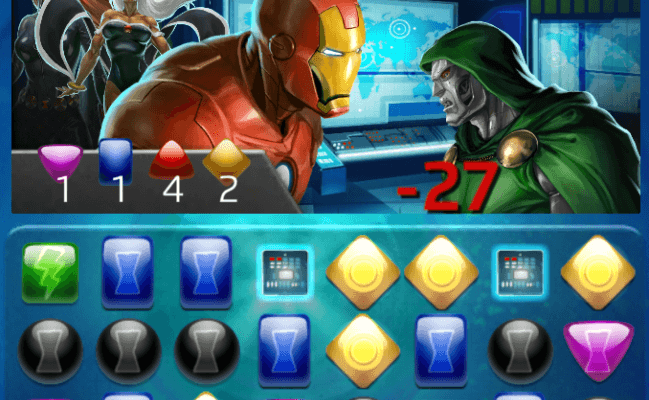 Saving the world one match at a time

If the Marvel super heroes knew all they had to do to defeat all kinds of villains was to beat them at match-3, they’d probably be a lot less angst-ridden. To date, no comic book writer has actually decided to act on this idea, but Marvel Puzzle Quest: Dark Reign comes close. Taking the core gameplay from Puzzle Quest and fusing it with the video game version of an actual comics storyline might sound strange, but it actually comes together pretty well.

Taking the baton from other Marvel mobile and social games like Marvel: Avengers Alliance, Marvel Puzzle Quest takes place after The Pulse, which sounds like something from Dimension Films but is actually a mysterious event that introduced the world to Isotope-8 (or just ISO-8, for short). The new element can make super-powered folks even stronger, and is thus coveted pretty highly by the forces of evil.

Though you only get a cursory introduction to all of this if you haven’t played the other games, S.H.I.E.L.D. has been keeping tabs on ISO-8. The new twist here is that Norman Osborn, the artist formerly known as the Green Goblin, has wormed his way into a position of power, and his H.A.M.M.E.R. organization has booted Nick Fury and company out of favor with the world’s governments. This can all be a little overwhelming if you aren’t versed in the source material, which might be the game’s most glaring weakness.

In any case, the story unfolds in short, comic-like dialogues between the actual game stages, which pit your team of heroes against villains and their henchmen in what have to be the world’s most high stakes games of match-3. Here, the game boards are filled with symbols corresponding to your heroes (an arc reactor for Iron Man, a lightning bolt for Storm, etc.), and you and the villains take turns making matches. Simple matches do small amounts of damage to the bad guys, while matching four or more symbols or setting off combinations can do a lot more.

That would get old pretty fast if that’s all there was, but fortunately that’s not the case. Concentrating on matching symbols of specific colors can charge up your heroes’ super powers, either dealing extra damage to enemies directly or transforming tiles on the board to your benefit. Of course the villains have powers too, leaving nasty surprises for you and forcing you to choose between offense and defense in many cases. The AI can be pretty challenging, and new mechanics come at you on a regular basis to keep you on your toes. 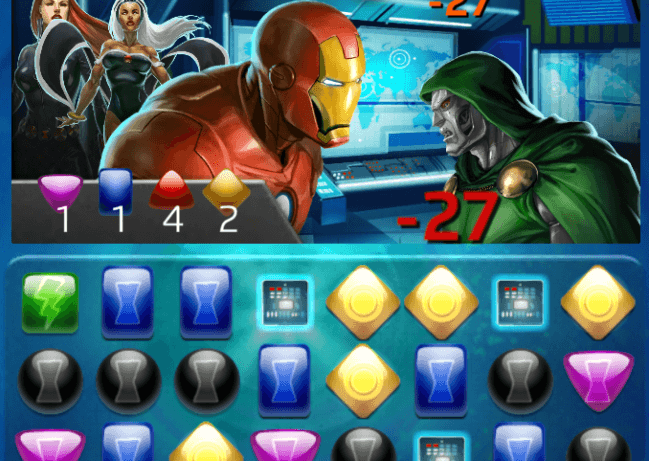 Between battles, you can level up your heroes using ISO-8 or boost their powers using actual comic book covers that drop as rewards. While it’s nice to have that visual hook from the covers, the system is actually a bit confusing since any given cover could correspond to any of that hero’s three powers. A premium currency called Hero Points is also on hand to purchase with real money, and it can get you more powerful covers or new heroes for your team.

Some levels have prerequisites before they can be unlocked, but there’s plenty to do besides plowing through the main story. PvP matches can be played against human opponents, and it appears there will be regular events in which to participate if you so choose. Previously defeated boards can also be replayed to try snagging additional rewards, and just like in Avengers Alliance, you can skip the dialogue you’ve already seen.

Except you might not want to, because it’s one of the real highlights here thanks to comic book scribe Frank Tieri. Whereas its sibling titles play it straight, Marvel Puzzle Quest has most of the characters quipping it up pretty regularly. Iron Man and Hawkeye have some especially funny exchanges, and even Fury proves to have something of a sense of humor. 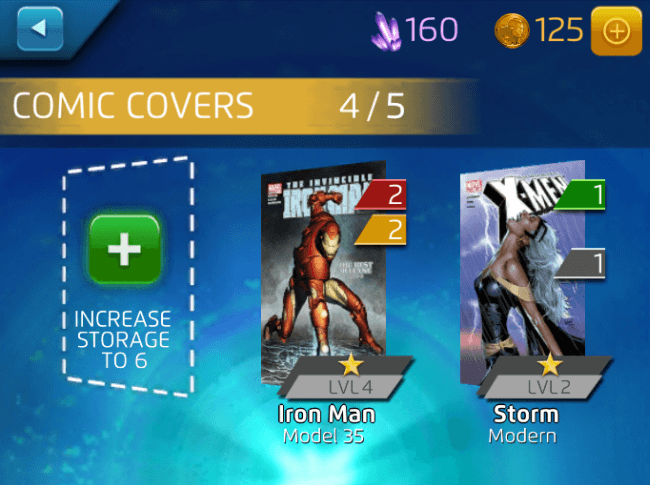 All of the Marvel characters are illustrated in fine, if unremarkable style, and the visual effects when special powers are activated are welcome. The boards are also above average thanks to the hero motifs on the tiles, as there’s only so much you can do with match-3 after a while.

Eventually, you figure the match-3 machine is going to run out of steam. But so far enough developers have been able to find new ways to present it that it hasn’t given up the ghost, and it helps when they can hook specific audiences. For comic fans, Marvel Puzzle Quest: Dark Reign can definitely do that. Just don’t tell the heroes they can trade their powered armor and web-shooters for iPads, okay?