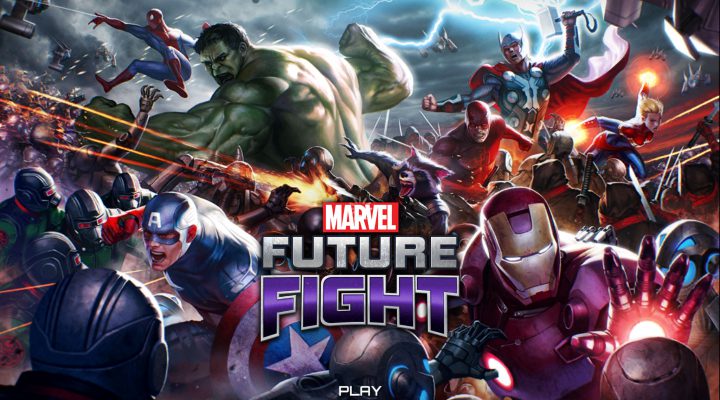 Straightforward dungeon-crawling action with a wide variety of Marvel heroes and villains.

Plenty of content and obvious room for future expansion.

Neither control system is super tight.

Many of the ways to improve characters are mandatory instead of offering real customization.

If variety really is the spice of life, than the number of different Marvel games we’ve seen over the past year or two is the mobile equivalent of a habanero. Yet the tastiest addition could be the most recent title in the mix. Marvel Future Fight is an action RPG that looks great, plays almost as well and tells an interesting story, plus it just happens to be releasing right before a certain movie you might have heard about. Good timing, eh?

The simplest way to describe Marvel Future Fight is as a dungeon crawler, though truthfully Spider-Man is the only one doing any crawling. In the tutorial section, you’re thrown into a battle featuring Thor, Black Panther and Black Bolt against some very familiar foes: themselves. Everything fades to white, which is like super hero comics code for the end of the world, galaxy or universe. 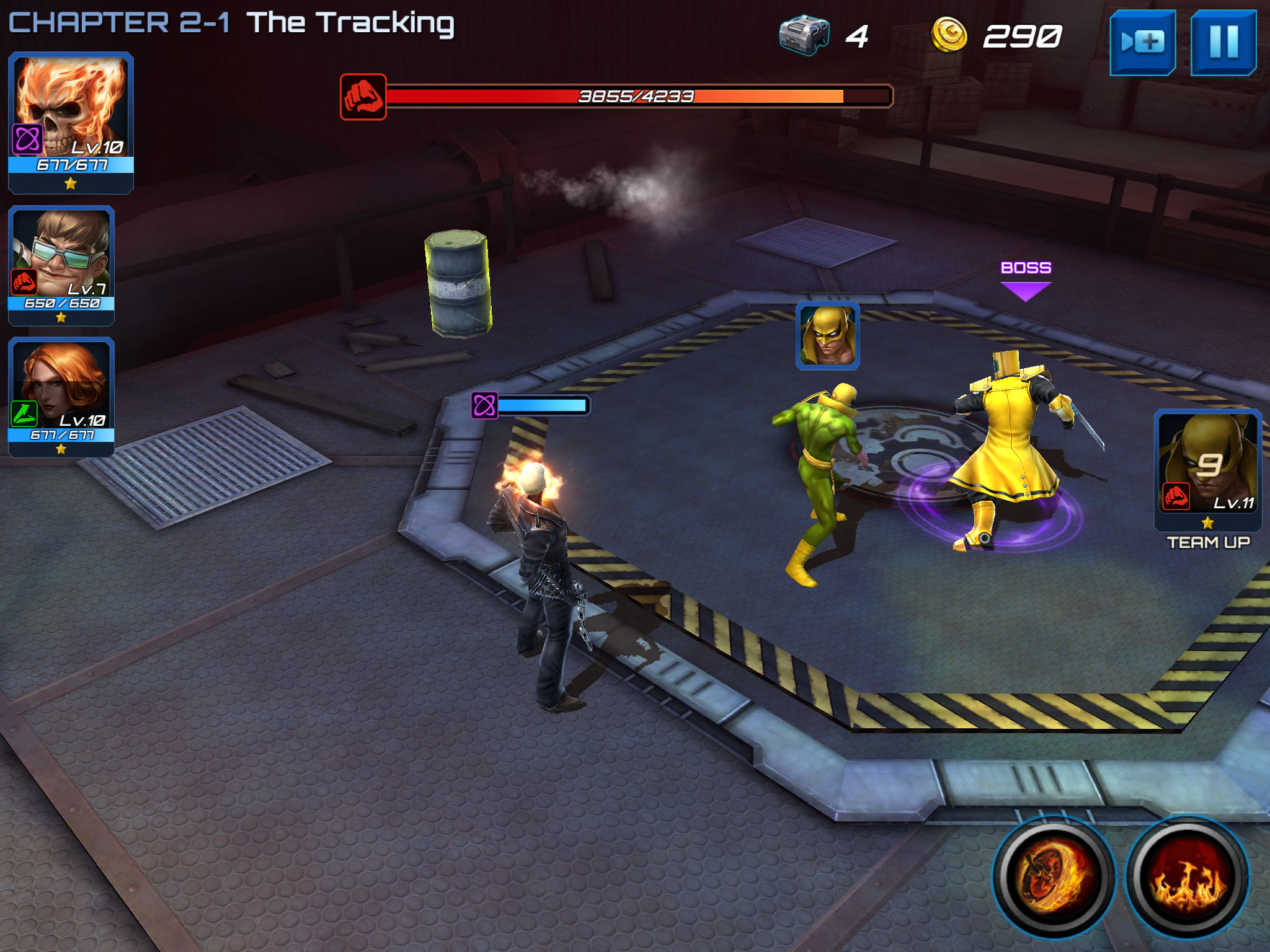 Fortunately, Jocasta (kind of Ultron’s daughter and bride, which is creepy, though she turned good) has a message from Nick Fury in the future concerning a threat that needs to be stopped in the present. Into action you spring, beginning with Iron Man, Black Widow and Captain America. Teams of three are the name of the game here, though you eventually are able to add dozens of heroes and villains to your roster.

Missions are fairly straightforward matters of clearing out grunts who attack you in small groups on your way to a boss battle. Future Fight offers you both a touch-based control scheme and one with a virtual stick and buttons. Neither is quite as tight as you’d like once the action starts to get really furious, but at least you have options. There’s also an auto-play button, good for showing you how much more efficient the A.I. is at using your character’s skills than you are. Ultron, is that you?

Speaking of skills, each character begins with two and can unlock more as they level up. These special attacks often look spectacular, like something out of a console fighting game, and they have simple cooldowns that tell you when they can be used again. There’s also a built-in social element common in these types of games where you can summon one character from another player to help you once a level — typically against the boss. You can swap in other team member simply by tapping on their portraits, and it’s fun to get everyone involved.

In-between missions and the fairly elaborate dialogue portions, you’ll be working on improving your heroes and villains in several different ways. There’s gear to upgrade, ISO-8 (like in every Marvel mobile game) to slot in and enhance and a skill or two to improve at any given time. Some of it seems mandatory, but the ISO-8, especially, offers some customization to fit your preferred play style. The soft currency, gold, is needed for almost all of this, while hard currency and social points can help too. 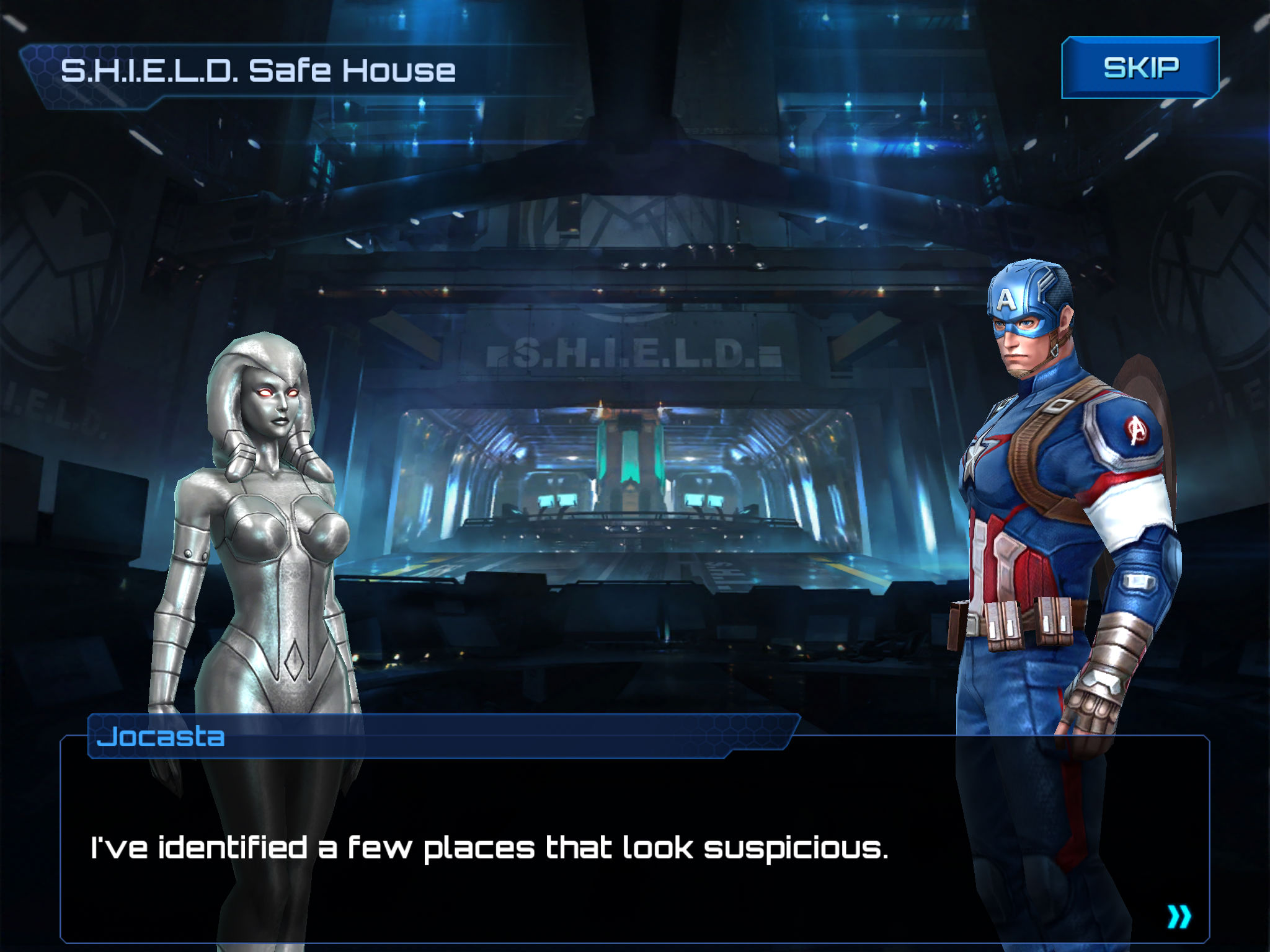 One thing I enjoyed, though others are probably going to dislike, is the way you can gradually earn items (called Biometrics) to let you unlock more heroes and villains. They’re divvied out to you in the same random fashion that nearly every mobile game likes to utilize right now, but there’s something about at least knowing that you are making progress toward that Hulkbuster that feels more satisfying than waiting for it to just pop out of a lucky box.

The character models look outstanding, and they draw from a wide range of sources, including classic and modern comics and the Marvel movies. In a move that should surprise absolutely no one, there’s a tie-in with Avengers: Age of Ultron in the form of a costume pack that grants bonuses to several attributes for each character from the film, and there should be plenty of potential to add more costumes for everyone down the road. 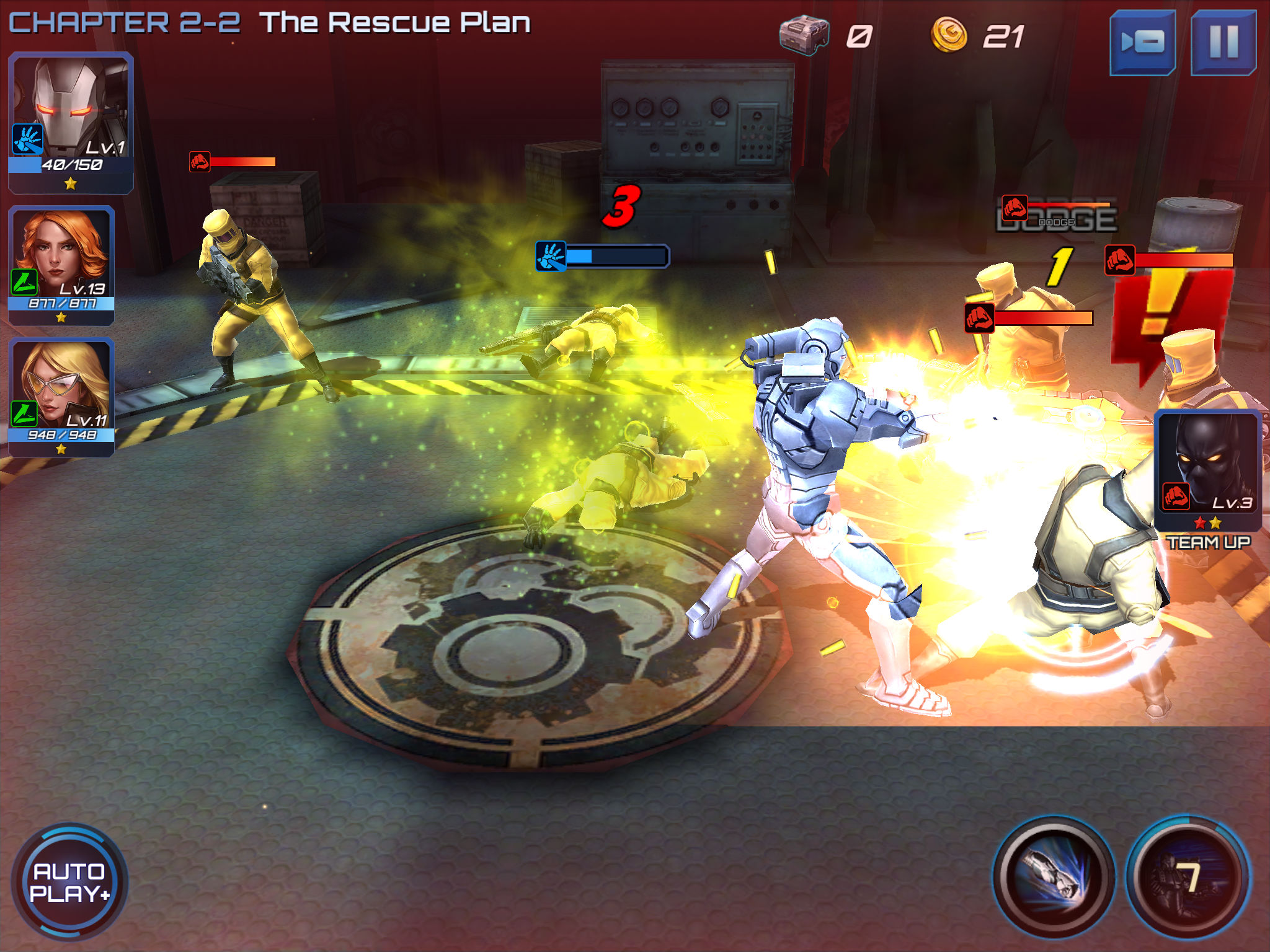 In fact with Elite versions of the normal missions and an Arena mode that unlocks once you’ve made some progress and the promise of events, the sky seems like the limit for Marvel Future Fight.

As it turns out, there is room for another free-to-play Marvel game on the market as long as it’s enjoyable, and this one certainly is.

Does Not Commute Review: Highway Star