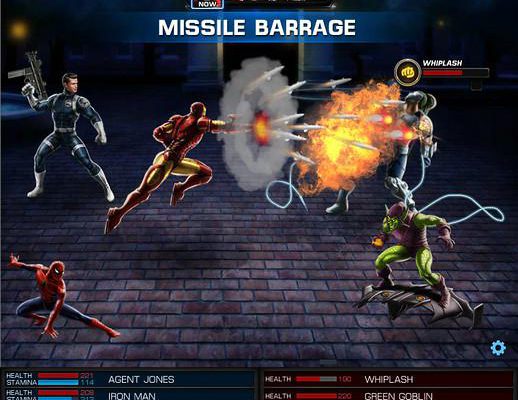 Suit up, true believers. This is the Facebook game you’ve been waiting for.

I’ve bought the comic books, I’ve seen the movies, I’ve even collected the toys – but try as I might, I could never be a superhero. Even after I was bitten by that radioactive marmoset, I wasn’t a superhero. Sure I could deftly scale buildings and use my ringed tail to grab on to trees and snare villains, but at the end of the day, there was one thing I was missing: other superheroes as friends. That’s where Marvel: Avengers Alliance comes in.

The latest roleplaying game on Facebook from Playdom, Marvel: Avengers Alliance puts players in the role of a young upstart agent in S.H.I.E.L.D., the Marvel Universe’s covert operations agency staffed by regular humans, but often tangled up in the affairs of the superhuman community. After a brief training mission, you’re sent to the field to help the likes of Iron Man, Black Widow, and Hawkeye as they begin their investigation into a mysterious new substance known as ISO-8 that is giving even the most basic thugs the strength they need to go toe-to-toe with the likes of The Avengers. And just like that, you’ve made the superhero friends that my real life crime-fighting alter ego never could. 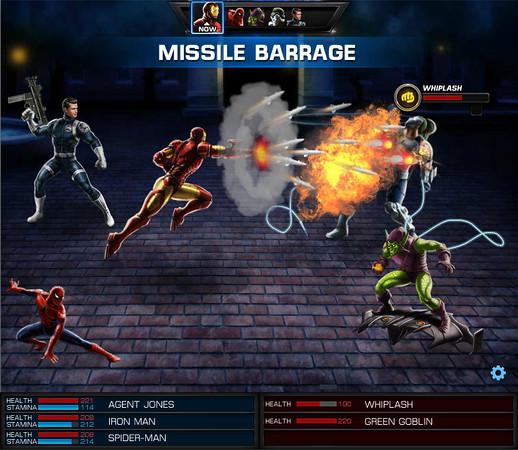 At its most basic, Marvel: Avengers Alliance is a nod to the classic turn-based role-playing games that players have known and loved for decades. If you’ve ever played a vintage Final Fantasy title, you’ll know exactly what to expect in terms of gameplay mechanics. Your party will feature three members, and each member and enemy on the field will take turns performing single actions. Actions consume stamina, and range from offensive attacks and defensive buffs to item uses, stamina recharges, and more. It’s a simple enough system to understand, but underneath these basic mechanics is a level of strategy not commonly seen in Facebook games.

Rather than simply mashing the attack command over and over, players will want to consider two very important elements when deciding which moves to make; condition modifiers and character types. Both heroes and enemies can be affected by a wide variety of conditions, and knowing how to make these work to your benefit is crucial to mastering the game. For example, early on you’ll face some HYDRA foot soldiers that are sporting fuel tanks on their backs. As such, they enter a fight with the condition “flammable.” A shot from Iron Man’s repulsor rays can cause “ignite” to happen, dealing extra damage and resulting in the new condition “burning.” This is good, because burning will cause additional damage turn after turn.

The other big thing that players will have to consider is character types. Avengers Alliance offers up five different classes, and each is strong against one type and weak against another. Think rock paper scissors, or better yet, Pokemon. But rather than simply being stronger and weaker against certain types, when you have the upper hand you’ll benefit from a specific perk. The Tactician class, for example, gets to take an immediate second turn after attacking a Blaster type, while an Infiltrator will counter-attack whenever they’re attacked by a Tactician. 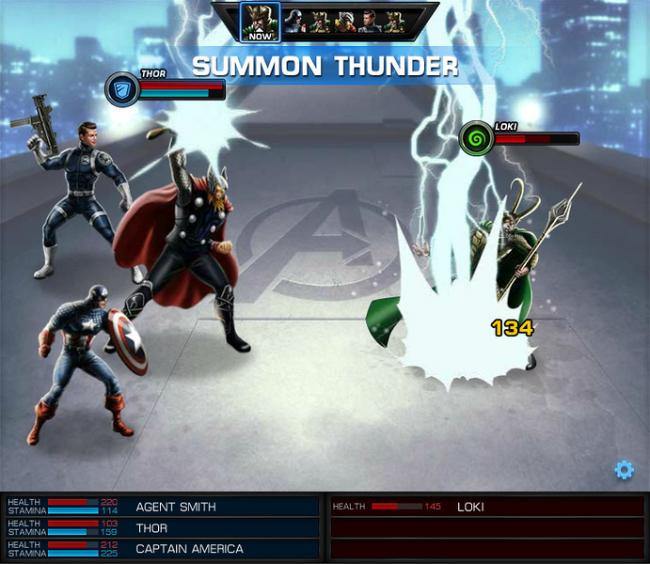 The game is overflowing with great little touches like these, and once you’ve got a handle on them, it can lead to some really interesting situations. Finding the best course of actions to take ends up feeling like a really satisfying puzzle. “If I have Hawkeye attack the Blaster Type enemy, he can get an immediate extra turn that I can use to recharge She Hulk’s stamina. That’ll free up my S.H.I.E.L.D. agent to destroy the guy with the bazooka because his gun packs a big wallop, and we reduced the enemy’s evasion with an attack last turn.”

At the same time, though, it’s a level of depth that’s only there for people who want it. If you’d rather just mash one of the attack buttons, that’s an option here too. You won’t get nearly as much out of the game that way, but hey – it’s certainly still playable for those who might be scared off by something a bit deeper.

While we’ve spent so much time talking about the combat (it really is the meat of the game), there’s a good deal built up around it that manages to shine too. Players will be able to unlock new and useful items and equipment through research, send certain heroes on solo missions to earn money and experience, and even take on the superhero teams of others in a bot-controlled asynchronous PvP mode. 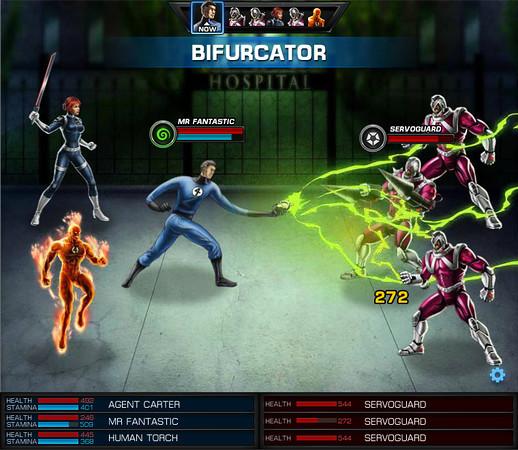 Both your superheroes and your S.H.I.E.L.D. character can be modified by permanently equipping different kinds of the aforementioned ISO-8, but more importantly, your S.H.I.E.L.D. character is highly customizable through the equipping of different weapons and suits. You can pretty much turn your character into any of the classes you want them to be, so long as you tweak them the right way.

Likewise, the game offers a huge selection of superheroes from the Marvel Universe to pick from, each belonging to one of the five main classes. Some of them will join you as the story progresses, but most need to be purchased with “command points.” On the upside, though, you’ll often encounter special fights that let you play with a hero you haven’t unlocked yet, giving you a taste of whether or not you’d want to add them to your collection.

You might think that this far into the review we’d have said everything there is to say about Marvel: Avengers Alliance, but honestly, we’ve barely scratched the surface. The game offers a single-player narrative, quality artwork, a neat multiple currency system… we could go on and on. What it basically boils down to is this: Marvel: Avengers Alliance offers a lot more substance and depth than you’ve come to expect from a Facebook game. It’s one of those rare Facebook titles that transcends the term “clickfest,” letting players put some real thought into what actions should come next. If there’s even an inkling of superhero or role-playing fandom in you, Marvel: Avengers Alliance is an absolute must-play.