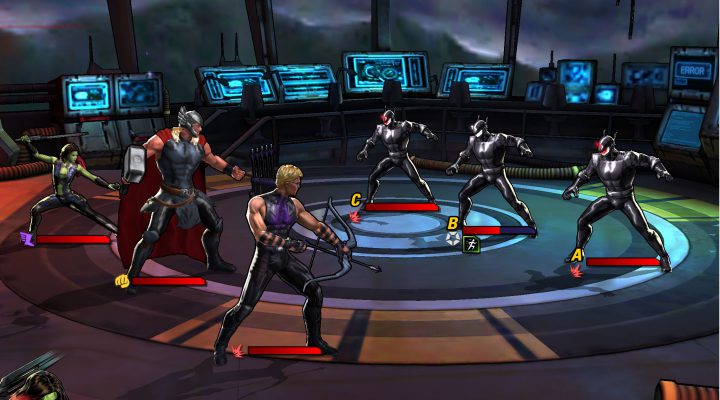 Straightforward tactical gameplay with a ton of Marvel characters.

Visuals and audio a big step up from its predecessor.

Doesn't take many chances on the existing formula.

Random hero acquisition could prove a frustration for those hunting their favorites.

When the history of mobile gaming gets told to our grandkids by their robot nannies, there will inevitably be a chapter about mobile games that started out as Facebook hits. The original Marvel: Avengers Alliance is a holdover from those days, which tells you how long it’s been a going concern. For Marvel: Avengers Alliance 2, Disney Interactive and Marvel Games went mobile first, resulting in a sequel that is bigger and bolder, though not necessarily better.

The bigger part is obvious as soon as you fire up the game. Marvel: Avengers Alliance 2 takes full advantage of the power granted to it by several years of improvements to mobile devices, meaning it looks incredible. Full 3D versions of Earth’s Mightiest Heroes and their foes await, complete with impressive animations and an appropriately dramatic soundtrack with plenty of driving guitars.

Like the first game, you take on the role of a SHIELD commander, though you stick to the sidelines when it comes to the actual fighting this time (undoubtedly a safer choice, that). The core gameplay remains the same; turn-based tactical combat that is very much in the JRPG style. In fact it might be bit too similar to what’s come before for some, even if it looks prettier. Disney Interactive obviously stuck to a “don’t fix what’s not broken” approach for the most part. You do get to field a bigger team, with the option to swap in two heroes from your bench when needed.

Along with that twist, there’s a great deal of additional strategic depth that might not be immediately apparent. Every hero now has customizable ability slots — two at first, with an additional slot opening up at level 10 — meaning they aren’t always packing the exact same powers. A variety of builds are possible, and since the abilities themselves can also be leveled up, it can make things a big guessing game when it comes to PvP play, which isn’t necessarily a bad thing. 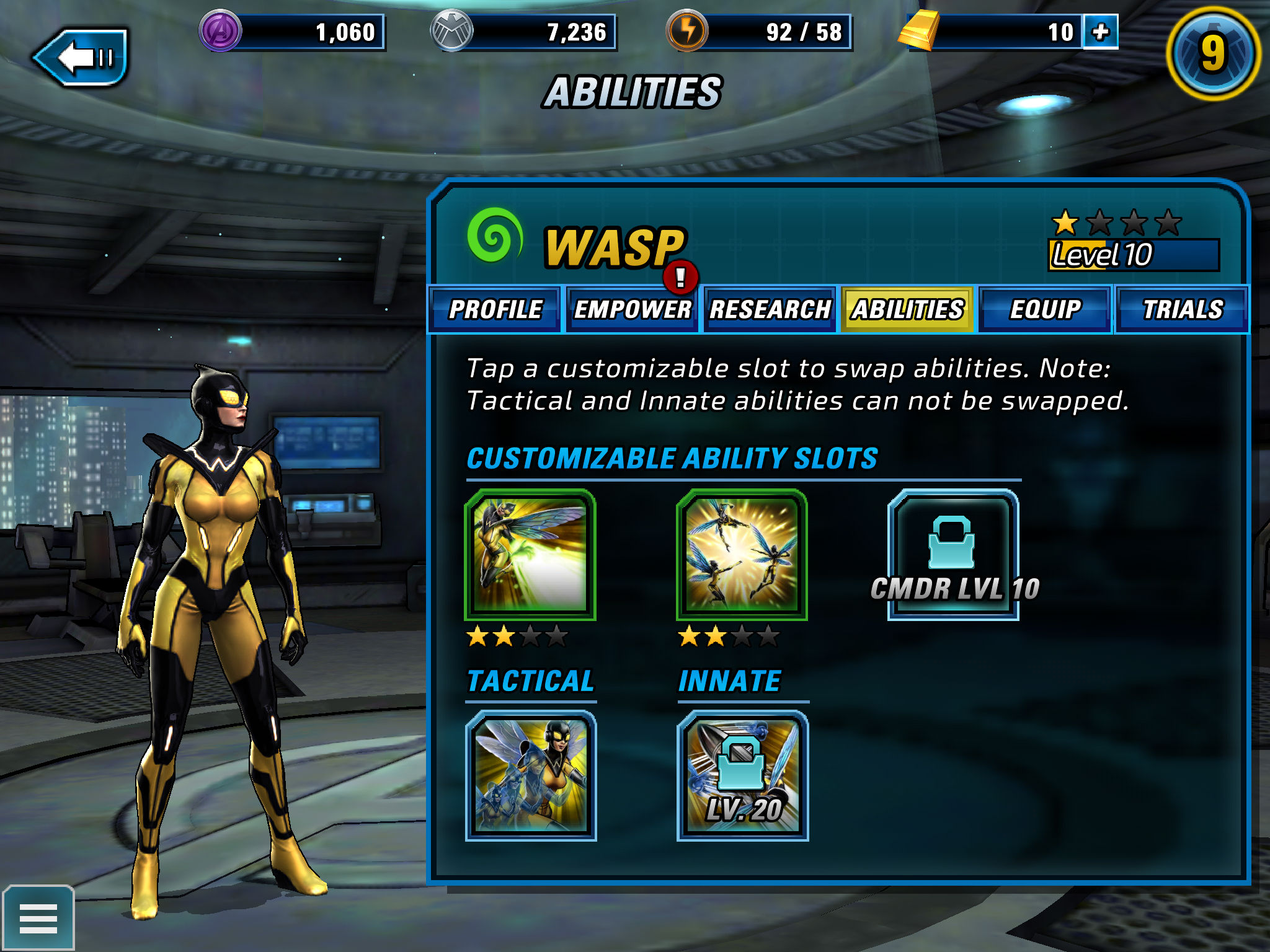 With those extra abilities comes an additional chase element, because you’re not only trying to collect more heroes in Marvel Avengers Alliance 2, but more abilities for the characters you already have as well. Both are acquired through a system that uses items called Power Cells. It’s very much in line with random reward mechanics found in many other F2P mobile games, yet it might frustrate gamers who appreciated having more control over which heroes to pursue in the previous series installment. Also, they’re like batteries. How do they fit the Hulk in one of those?

Jokes aside, duplicate finds from Power Cells are converted into currency that allows you to purchase specific abilities, which is nice. Many other things have been streamlined, including the way that ISO-8 can be slotted (this is a Marvel game, after all) and how heroes are leveled up. There is one strange exception though: Promoting characters to levels 10, 20 or 30 requires items that are primarily found through special, non-story quests. Again, this is pretty common in the current F2P mobile landscape, but it comes off as a bit of an annoyance instead of an exciting addition. 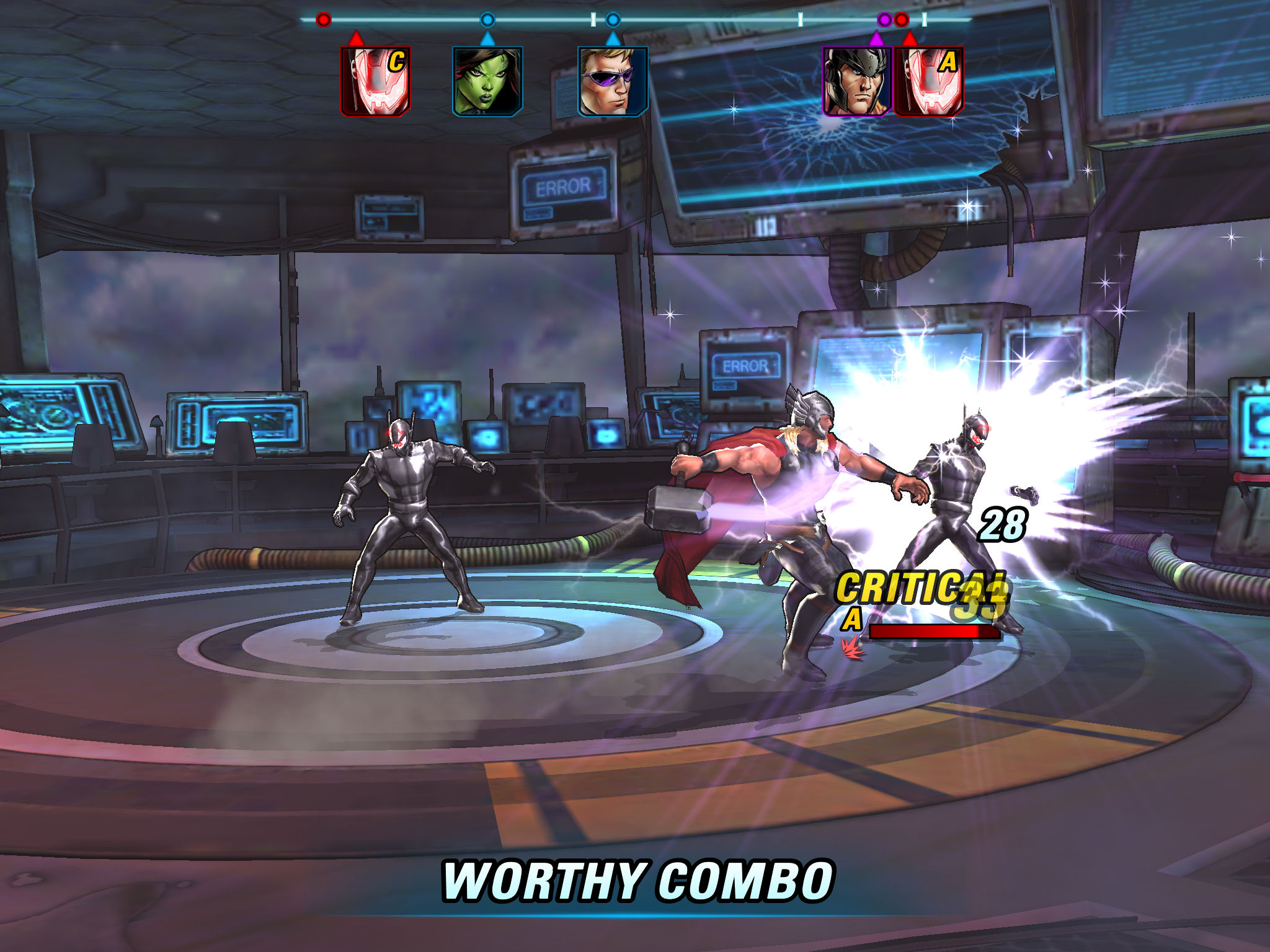 It’s to the game’s credit that you’d be irked by diverting away from the meat of the narrative, which once again promises to be a highlight. There’s definitely an epic tale being told that involves the Avengers, various SHIELD personalities and numerous villains, and that’s just in the first chapter. The folks at Disney Interactive have spoken of the new ways that going mobile first allows them to tell stories, and anyone immersed in Marvel lore is going to want to see where the story leads.

Where does that leave us? While not quite the revelation that its predecessor was when it landed on Facebook four years ago, Marvel: Avengers Alliance 2 is a worthy heir to its legacy; one that takes a solid foundation of both gameplay and story elements and wraps them in sleeker presentation. It slots in nicely with the other Marvel games of various genres already available for phones and tablets, and unlike the first Avengers Alliance, this one is all for us mobile gamers.