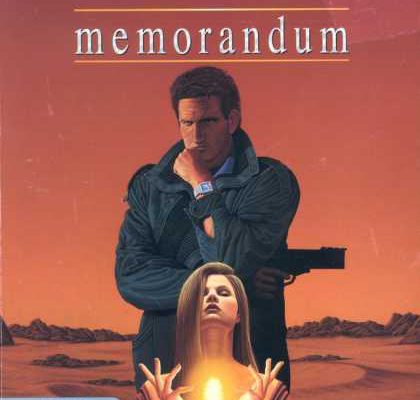 It’s time once again to step into the gumshoes of private investigator Tex Murphy. In the grim, radiation soaked future of Martian Memorandum, he’s been hired to find the missing daughter of the obscenely rich head of Terraform, Marshall Alexander. It looks like a simple kidnapping, but as Tex soon learns, nothing is as it seems.

Martian Memorandum is a classic point and click adventure game that’s sure to give your brain a good workout – though not always in a good way. Unlike its relatively low-tech predecessor, Mean Streets, Martian Memorandum makes use of mouse input and clickable hotspots in the environments. After selecting an object, you can then select a command from the bottom of the screen, such as Look, Move, Get, or Open. The commands don’t always quite make sense with what you’re trying to do – you don’t "Use" or "Move" a lightswitch, for example, you "Open" it – but you’ll get use to the system’s quirks fairly quickly.

You’ll come across a number of shady characters during your investigation, and almost noone is willing to talk to you immediately (you’re not terribly well liked, so you’ll have to figure out how to persuade them to spill their guts. In some cases, a little cash is all it takes to grease the wheels – in others, you’ll need to present incriminating evidence. It’s a realistic and clever approach to the typical dialog trees that adventure games usually use, but it can be extremely frustrating. All too often, you’ll know what to do, just not how.

When you initiate a conversation, you’re given a selection of responses you can use; in most cases, you’ll have to pick a certain response before offering whatever it is the person needs, but figuring out which response is the right one requires a lot of trial and error. In and of itself, that’s not such a big deal, but the characters in Martian Memorandum speak to you via unskippable full-motion video. Badly acted, unskippable full motion video. Having to sit through the same poorly-delivered dialog over and over and over again as you try to figure out the correct sequence of asking and offering can be very frustrating. Fortunately, once you’ve gotten someone talking, you should have no trouble getting all the information you need.

Though the ability to use a mouse to peruse a scene is a welcome improvement over Mean Street’s keyboard-only interface, the dated graphics can prove a bit tricky to navigate. That blobby group of pixels is an ashtray? Really? It may require a bit of extra poking around to make sure you’ve found absolutely everything of importance in a location, so just remember – click everywhere and look at everything. If you’re really stuck, you can always try asking your secretary, Stacy, to dig up some information for you, or just hit the "Help" button for a nudge in the right direction.

Martian Memorandum is not for the easily stumped or flummoxed. The mystery is satisfying and intelligent, but correctly navigating the suspects, interrogations, and crime scenes requires a great deal of patience. It also puts you in the somewhat unusual position of being able to die; a familiar enough situation in arcade or skill games, but not typical for adventure games. There are a handful of places in the game where you are almost certain to die the first time you encounter them, but as long as you save often, it shouldn’t be too much of a hassle.

Martian Memorandum continues the series’ high quality of writing and complex, satisfying mysteries, and its improved tech are far more user-friendly for modern players. Its occasional fussiness will likely vex players more than once, but those willing to endure its quirks will enjoy their time with Tex – even if he is a bit on the surly side.

For similar games, try Mean Streets, The Blackwell Legacy, and Simon the Sorcerer.